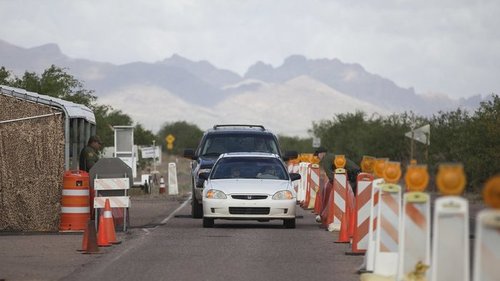 The NEW YORK TIMES’ War On The Border Patrol

As #BlackLivesMatter escalates its attacks on police officers, the Main Stream Media is opening up another front in the war on law enforcement, this time against the Border Patrol. The New York Times, seemingly in conjunction with the American Civil Liberties Union, has an emotional story that’s long on accusations, short on facts, and ignorant of the law. And the point of the story seems to be less to find “abuses” by the Border Patrol than to prevent them from doing their job altogether.

The federal checkpoints on highways near the Mexican border, with trained dogs and expensive scanning equipment, are supposed to stop drugs and immigrants without legal status from heading north. But newly released complaints against United States Customs and Border Protection paint a disquieting portrait of the interactions between agents and many of those they stopped and searched.

Last year, in southeastern Arizona, a military veteran said his children shuddered with fear in the back seat as agents repeatedly asked him if the children were really his. A woman at a checkpoint between Phoenix and Tucson said an agent threatened to use a stun gun on her brother in 2012 after he asked why their vehicle was being searched. And at a California checkpoint in 2013, a man said an agent approached him, hand on his holstered weapon, and demanded, “How would you like to have a gun pointed at your face?”

Hackette Santos [who can be contacted here] uses the usual trick of using a military veteran as the go-to victim in order to gain sympathy from American citizens fed up with illegals. We are told of “6,000 pages” of complaints and statistics, leading to an image of an agency out of control.

However, a closer reading shows only 142 complaints over a three-year period, a small number considering the amount of territory covered and number of stops. As only one was followed up with punishment, it appears likely most were “baseless complaints,” as they are called in Internal Affairs—i.e. about a lawful act by an agent of the government, and there is nothing to investigate.

Here’s the reality. Immigration checkpoints are actually quite effective—which explains why the Left and the MSM hates them so much. Too many illegals are arrested and too many of their favorite drugs are intercepted.

At these checkpoints, Border Patrol Agents (BPA) and Customs and Border Protection Officers (CBPO), stop vehicles and question the occupants. The busier the checkpoint, the less likely each vehicle is stopped. For example, at the furthest checkpoint from the Mexican border, the checkpoint at San Clemente, not every vehicle is stopped.(The San Clemente Station straddles the highway 70 miles north of the border, blocking the exit to the “immediate border region”.) All are scanned by an agent who decides which one to stop and which one to wave through. This necessitates discretion and judgement by the BPA or CBPO. Naturally, profiling is used, and is perfectly legal.

The agent or officer asks the driver and passengers one simple question: “What is your citizenship?” Those who answer quickly and, in the opinion of the officer or agent, honestly, are thanked and are on their way.

However, while this simple exchange is being completed, the agent or officer is looking for evidence of a crime, generally illegal entry, alien smuggling, or drug smuggling. The vehicle and its passengers may also be referred to what is called “secondary inspection” where a search or additional questions may be asked, again, legally and without any needed reasonable suspicion or probable cause. However, the secondary inspection may generate reasonable suspicion or probable cause to hold the vehicle and occupants for additional time.

Of course, today there is an entire subculture of people who seemingly enjoy going to these checkpoints and get in shouting matches with the officers. Screaming “Am I being detained?” is practically a meme.

In reality, the frustrated BPA just wants to know their citizenship, which the driver and occupants only need to verbally declare if they are United States citizens. No identification is needed, nor usually asked for, unless the person is an alien, or the officer has reason to believe a person in the vehicle is an alien.

Aliens are required to carry proper immigration documents—regardless of their status as non-immigrants or legal permanent residents. Even illegal aliens are technically required to register and carry such identification. One has to try very hard to not get quickly through a checkpoint. All one has to do is say “U.S. citizen.”

Indeed, the heart of the New York Times tirade is that agents are violating the Fourth Amendment “which prohibits unreasonable searches and seizures,” as the NYT sternly intones. The article also specifically condemns the use of racial profiling.

But if the initial stop is limited in time and duration, the Supreme Court has ruled that both primary and secondary inspection at a checkpoint is a reasonable exception to the Fourth Amendment protections against unreasonable search and seizure. And racial profiling is explicitly legal.

As the Supreme Court put it:

[It] is constitutional to refer motorists selectively to the secondary inspection area at the San Clemente checkpoint on the basis of criteria that would not sustain a roving patrol stop. Thus, even if it be assumed that such referrals are made largely on the basis of apparent Mexican ancestry, we perceive no constitutional violation. Cf. United States v. Brignoni-Ponce, 422 U.S. at 422 U. S. 885-887. As the intrusion here is sufficiently minimal that no particularized reason need exist to justify it, we think it follows that the Border Patrol officers must have wide discretion in selecting the motorists to be diverted for the brief questioning involved.

As does another decision the previous year, so long as the decision to look at race is accompanied by at least one other factor.

The Government also points out that trained officers can recognize the characteristic appearance of persons who live in Mexico, relying on such factors as the mode of dress and haircut. Reply Brief for United States 12-13, in United States v. Ortiz, post, p. 422 U. S. 891. In all situations, the officer is entitled to assess the facts in light of his experience in detecting illegal entry and smuggling. Terry v. Ohio, 392 U.S. at 392 U. S. 27.

So Law enforcement officers are allowed to look for illegals at checkpoints. And that is the real complaint of the ACLU or the MSM.

The agenda these Treason Lobby affiliates are pursuing isn’t “protecting the Constitution”—but electing a new people to get rid of it for good.