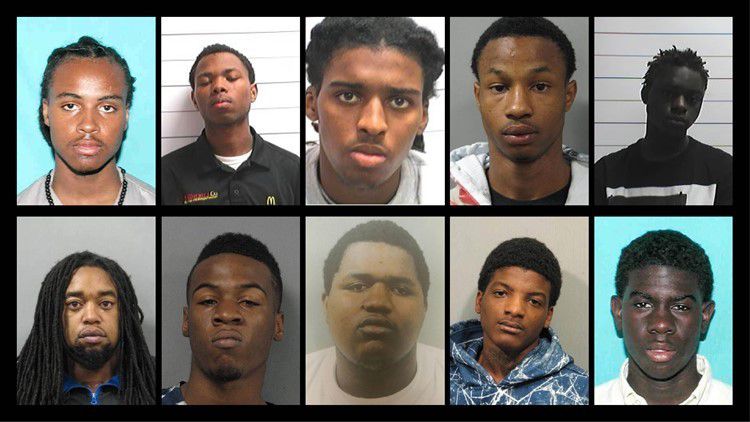 HotAir On Shootings The MSM Doesn't Care About: Hmong Shooting In Fresno, "Leaded Law" Shooting In New Orleans In 2015

Above: suspects in the 2015 Bunny Friend Park shooting. They're not murder suspects, because no one died.

Jazz Shaw at Hotair.com (which was founded by Michelle Malkin) writes about two shootings that don't fit the Narrative. One is the Hmong shooting in Fresno, where, of course, Hmong violence is a regular thing, and has been for years. I covered it here in Fresno Asian Mass Shooting Involves Hmong...As Usual. 10 people were shot, and four of them died, so far.

The other is one I don't remember hearing of: the Bunny Friend Park shooting in New Orleans, in 2015. Sixteen people were shot...and no one died, although at least one was permanently crippled.

After describing the Hmong shooting as by two gunmen with normal pistols (no "assault" rifles, etc.) Shaw writes:

In other words, this mass shooting is uninteresting to much of the media because it fails all the normal tests and doesn’t fit in with the narrative. Had the men at least been using “assault rifles” they might have merited a bit more coverage. But those events are vanishingly rare because most gang members are well aware that it’s tough to hide a long gun when walking down the street to attack someone or while fleeing the scene afterward.

Further, if initial reports prove accurate, this was an incident of adult Asian people shooting other adult Asian people. And most of the press has about as much interest in that story as one where black gang members are shooting other black people. In short… basically none. It’s reminiscent of the Bunny Friend Park shooting in New Orleans back in 2015. It was the second-largest mass shooting of the year in the United States.

Seventeen people were shot in the middle of a public festival but if you didn’t live in New Orleans or subscribe to the Times-Picayune, you probably never heard about it. Why? Because it was two rival gangs composed primarily of African-Americans settling a turf war. Unfortunately, they were such poor marksmen that almost all of the victims were bystanders, including a young boy who was shot through the spine and will likely spend his life in a wheelchair.

So the Fresno shooting has effectively already gone down the memory hole, while the last school shooting (that claimed fewer victims) is still popping up in the news a week later. There’s no real underlying lesson here that we didn’t already know about. I only bring it up as a useful data point for future reference. The police still have no suspects identified in the Fresno shooting, but hopefully, progress will be made. We should send out our thoughts and prayers to the victims and their families.

Why you’re not hearing more about that mass shooting in Fresno, by Jazz Shaw, November 19, 2019, Emphases added

But the main reason it wasn't a big deal is that no one was killed.

In my article describing what the Ben Kurtz blog called the "Leaded Law" (Briefly: "If the shooters exhibit bad aim (substantially worse than 1 killed for every 3 wounded) then they are Black gangsters settling a score.") I had a number of possible reasons why blacks may be such poor marksmen.