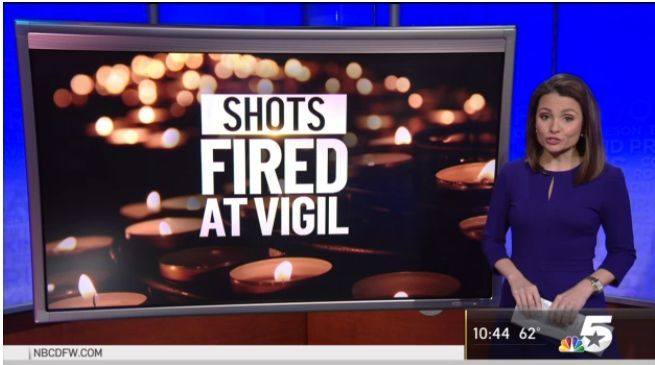 Leaded Law Update: "Shots Fired" (But No One Hit) At Dallas VIGIL For Greenville Black Shooting

The "Leaded Law" is a rule of thumb that says that a shooting like the one in Greenville where lots of people are shot but hardly anyone is killed is more likely to be a black gang dispute, or involve aspiring rappers, than to be a terrorist attack or a suicidal mass murder. As I noted in an update to my earlier post, it seems to be the case in Greenville.

Heavy.com has photos of one deceased victim: Kevin Berry AKA Choppaboy Wess who seems to have been a member of the aspiring rapper community:

Here are some quotes from Heavy.com's search of Berry's Social Media:

He filled his Facebook page with photos showing him with wads of cash. Several photos show him pointing a weapon at the camera. On October 25, he wrote about being in court. “I’m At Court And Seen Tha Law Walk Them Jailway Sandwiches Across Tha Hall… I Already Know What Time It Is Ima Be Here For A Min 😂” he wrote on October 25. On October 17, he wrote that he had been shot at.

In one now chilling post, he wrote the day before he died: “…let’s walk to the cemetery to show u where u gone end up if u play wit me🖤.”

It's possible that he was targeted deliberately by whoever did the shooting. In a related "Leaded Law" note involving poor black marksmanship, shots were fired at a Dallas vigil for the Greenville shooting, but no one was hit.

Active shooting at a vigil tonight for one of the #TexasAMCommerce victims. As the vigil wrapped up, people began shooting. Multiple shots. Our news unit was hit at least 3 times. I have not seen anyone injured. It’s possible some took themselves to the hospital. pic.twitter.com/w9GRxNDKlV

They did put three bullet holes in an NBCDFW van. By the way, the vigil attendees were family and friends of the victims...which means, once again, that they weren't white Texas gunmen in cowboy hats.

My 2017 column on the "Leaded Law"  proposed a number of possible reasons  for poor black marksmanship. One of them, believe it or not, is racism. Read it here.