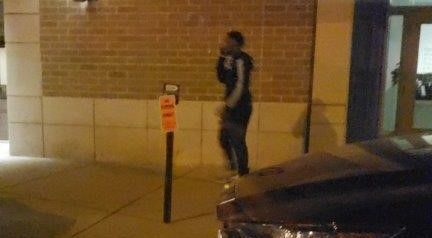 "Leaded Law" Update: "Mass Shooting" In Indianapolis By "Youth" Wounds 6, Kills No One

A story about a mass shooting from CNN which didn't kill anybody:

A statement from the white chief of police says this:

Police are looking for the shooter, who they think is a juvenile. [Obviously of no particular color]
"This shooting is likely the result of disturbance/fight between two juvenile groups and not a randomly targeted shooting," the statement said. Three of the wounded were juveniles.

"The disregard for human life and inability to emotionally handle conflict last night is past feeling," police Chief Bryan Roach said. "Constant monitoring and community involvement of our youth downtown [If they were of any particular color, this would be racist.] was successful all summer.

#UPDATE - Indianapolis police have released a photo of a "person of interest" in the downtown shooting that left six people injured Saturday night. https://t.co/0980zsHcFx

The person  of interest is, of course of no particular color, but when you read the linked story [IMPD looking for ‘person of interest’ [Of  no particular...oh, the Hell with it.] 6 injured in downtown shooting, WISHTV.com, September 21, 2019] we read that the alleged shooter is

a person of interest in the case was released Sunday morning. Authorities are asking the public for help in identifying the male subject. He is described as wearing a dark colored sweatshirt with light stripes on the sleeves and dark jeans.

It's amazing how his sweatshirt is of a particular color, but he is not, as far as descriptions go, but here's the picture that description is based on.

I've written about why this is in article called The “Leaded Law” And Mass Shootings—Poor Black Marksmanship Is Saving Lives. But remember, as Colin Flaherty pointed out: "a New York Times story from 2016 ... stated, much to the surprise and chagrin of the reporters, that whenever there are three or more victims of gunfire, 75 percent of shooters in America are black."

But fortunately, they can't shoot very well. Remember this when the same people who oppose stop-and-frisk programs, which might have saved this fellow's victims from being wounded, and actually have saved many lives in New York, propose new laws to disarm the mostly white owners of legal firearms.