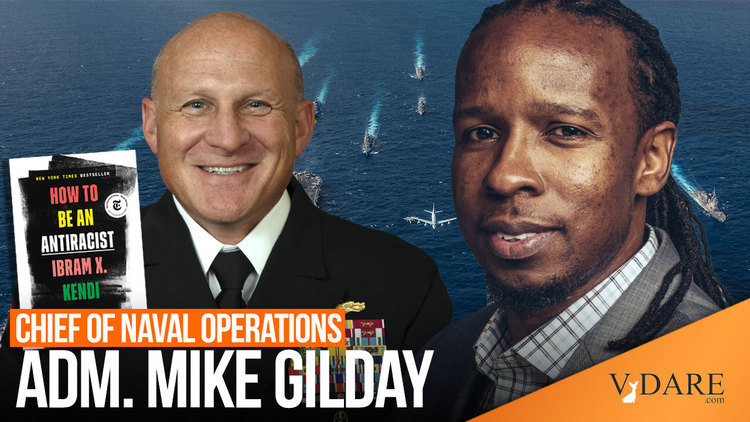 CNO Gilday Wants To Make U.S. Navy "The Most Diverse Service"—Which Should Just About Finish It Off

Steve Sailer mentions this here—Gilday was being questioned by GOP lawmakers for including Kendi's How To Be An Antiracist in the Navy's recommended reading list.

Charles Murray Vs. Ibram X. Kendi: Murray Has Facts And Logic On His Side, But Kendi Has The US Navy - @Steve_Sailer https://t.co/oRMh7nUUwr

Apparently today's Navy can no longer put out fires, the most basic task for any naval force expecting to go in harm's way:

The U.S. Navy is supposed to be pretty good at putting out fires. Several of the most heroic passages in USN history are fire-fighting efforts that saved stricken ships from destruction. Today's coed diverse Navy had to call the local fire department. https://t.co/6HprmLFLwV

When the USS Bonhomme Richard caught fire, Steve wondered if it might be a BLM arson attack. The Navy claims it's a white guy.

His motive allegedly involved a love triangle with a sailorette:

For gossip about steamy goings-on in back rooms, the USS Bonhomme Richard sounds like a cross between the crew of a casual dining restaurant staffed by community college students & Paul Verhoeven’s Starship Troopers. Has Navy installed coed showers yet?https://t.co/8vYHlvjJ3A

Paul Kersey notes that U.S. Navy officers are "up to speed on diversity training. Not so much ship handling" according to reports.

Diversity sunk my battleship. The Navy has gone from victory at Midway to disaster due to multiculturalism. The greatest ally the Chinese have is American Flag Officers who believe “diversity is our greatest strength.”https://t.co/kSzs4ofMfy

RamZPaul weighs in on the same report:

Spoke to a friend who recently retired from the Navy. He served on an aircraft carrier. The female "sailors" were literally running a brothel on the ship. https://t.co/I8yBjfupAp

In the modern Navy, you are expected to pledge to, among other things,

advocate for and acknowledge all lived experiences and intersectional identities of every Sailor in the Navy. I pledge to engage in ongoing self-reflection, education and knowledge sharing to better myself and my communities.

Pictured below... "Honest to God, that’s what the Navy wrote on p. 10 of their big report... Chairman Xi is likely thinking about now, “You know, fighting our way through the US Navy to conquer Taiwan might not be so hard after all…” - @Steve_Sailer https://t.co/QZCZXwMi9L

For example, they could advocate for the lived experience of an unnamed, but presumably black sailor who committed a fake hate crime against himself, vandalizing his own quarters on ship, and scribbling an epithet on the wall.

In spite of which, the Navy said, he would  "remain a member of the crew of the USS George H.W. Bush and will continue to perform his military duties."

Sailors can commit fake hate crimes against themselves, because the reward for being a "victim" is huge. https://t.co/djA1apYsr4

A further problem of the New, Diverse, Coed, and possibly Transgender Navy: they can't keep from crashing their ships into other ships.

Below, the Arleigh Burke–class destroyer USS Fitzgerald, named after two actual seamen, after it was turned over to a woman driver in a crowded seaway:

This is the woman, above, who burst into tears at her court-martial, which let her off with a slap on the wrist.

Junior lieutenant, Sarah Coppock in charge of navigating the USS Fitzgerald when it collided with a commercial vessel pleaded guilty Tuesday to dereliction of duty and acknowledged her role in the deaths of seven sailors last year.https://t.co/ksxHoiUwhf #Navy pic.twitter.com/G1Jn1TrLsd

"Coppock did not sound the collision alarm to warn sailors of the impending risk. 'I just got so wrapped up in trying to do anything that I had to just drop the ball on everything else that I needed to do.'" #FunFact: Lt Sarah Coppock was not cashiered https://t.co/5WLub37dYA

But of course, the real culprits are the Admirals and Congresspeople (a lot of them Congresswomen) who thought it was a good idea to let an untrained woman have control of a ship in a crowded seaway. Here's some more news—they're not going to jail.

And they're not going to win any naval battles with China, either!