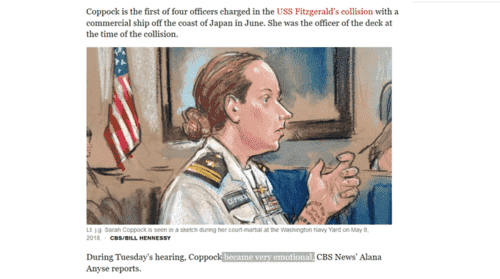 In John Derbyshire Asks A Politically Incorrect Question About Our Fender-Bender Navy [August 2017] Derb asked if the PC culture of the New Navy was responsible for four serious  incidents in one year, one of which was

June 17th The destroyer U.S.S. Fitzgerald collided with a Filipino container ship in the waters off Japan. Seven of our sailors were killed, three more injured. What's the normal number of collisions per annum? Close to zero. Prior to this year, the last such incident was in 2004, when our aircraft carrier the U.S.S. John F Kennedy ran over a dhow in the Persian Gulf.

Well, we can now answer that: the U. S. S. Fitzgerald had a woman driver—Lt. j.g. Sarah Coppock was officer of the deck.

A U.S. Navy officer pleaded guilty to dereliction of duty Tuesday in the collision of a U.S. Navy destroyer that killed seven sailors last year. Lt. j.g. Sarah Coppock was sentenced to receive half-pay for three months and a letter of reprimand.

The plea was the result of an agreement between Coppock and military prosecutors before a special court-martial was supposed to begin at the Navy Yard in Washington.

Stars And Stripes  says Coppock burst out crying during her court-martial, in which she pled guilty to dereliction of duty.

Fitzgerald officer of the deck pleads guilty at court-martial 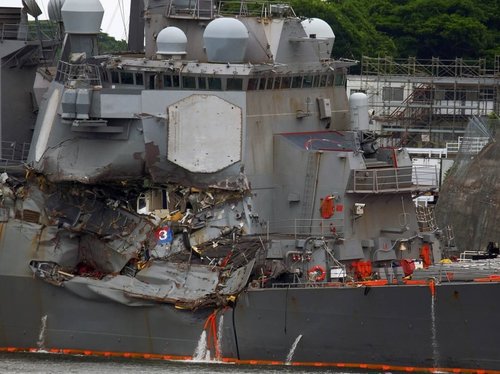 WASHINGTON — The junior lieutenant in charge of navigating the USS Fitzgerald when it collided with a commercial vessel pleaded guilty Tuesday to dereliction of duty and acknowledged her role in the deaths of seven sailors last year.

Lt. j.g. Sarah Coppock cried during her court-martial at the Washington Navy Yard. She was sentenced to forfeit half of her pay for three months – an additional month on top of the two she forfeited as her nonjudicial punishment. She also received a letter of reprimand.

“Not a day goes by where I haven’t thought about what I could have done differently,” she said. “There is nothing I can do now but take responsibility.”

Coppock said her success as an officer of the Navy was through the support of her squadrons. “And then, when it mattered, I failed them,” she said through tears. “I made some tremendously bad decisions and they had to pay the price for them.” [More]

They did—they're dead. Coppock, on the other hand, doesn't seem to be paying much of a price for it. Ex-servicemen, from when there was a real Navy, are being savage about it on Twitter.

Coppock's lawyer, it says in Stars And Stripes

described a tattoo Coppock got on her wrist after the collision. It contained the coordinates of the ship at that moment, framed by the phrase “Protect Your People” above it and seven clovers beneath it.

(You can kind of see this in the picture above.) One man said "But she got a commemorative tattoo, so all is forgiven", and when another man pointed out that tattoos in that style are against Navy regulations, a third said

Not joking, my command would have punished me more harshly for that tattoo than she got for wrecking the ship.

causing someone else to say

Did she just give herself kill mark decals like an ace pilot in WW2?

Like I said, savage. But of course, the real culprits are the Admirals and Congresspeople (a lot of them Congresswomen) who thought it was good idea to let an untrained woman have control of a ship in a crowded seaway. Here's some more news—they're not going to jail either.