It's just been reported that CNN has settled the lawsuit brought by the Covington Catholic schoolboys who were attacked by Black Hebrew protesters, a real Indian who was a phony veteran, the MSM including CNN, and...Conservatism, Inc.

You can also see it on CNN, reported by Oliver Darcy, if you consider that a credible source, but of course, the CNN corporation, which knows everything about the settlement, isn't telling its employee Darcy anything—"No other details were immediately available."

There are three things to remember about this.

1. Everything the media said about this proved to be wrong.

2. Conservatism, Inc, fell for it hook, line, and sinker, and

3. Litigation works. Even something the size of CNN can fold in the face of the American legal system. 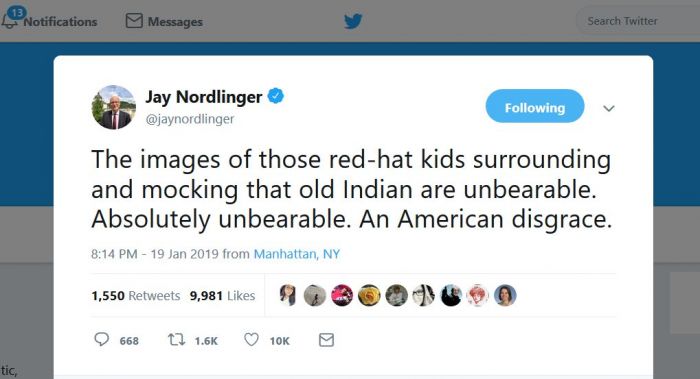 He climbed down later, but, as noted by Gateway Pundit, National Review Online, had to delete not just Tweets, but an actual article, saying (archive link)

It appears that most of the teenagers in this video are from a Catholic high school near Covington, Kentucky, across the Ohio River from Cincinnati. They mock a serious, frail-looking older man and gloat in their momentary role as Roman soldiers to his Christ. “Bullying” is a worn-out word and doesn’t convey the full extent of the evil on display here.

For some of us, the gospel stories of Jesus’s passion and death are so familiar we no longer hear them. The evangelists are terse in their descriptions of the humiliations heaped on Jesus in the final hours before his crucifixion, the consummate humiliation. Read the accounts again or, if you’d rather not, watch the video. The human capacity for sadism is too great.[More]

The is absolutely mental, but the capacity of cuckservatives to believe evil of white people is nothing new, as we saw in the Trayvon Martin/George Zimmerman case, the Baltimore Riots, and the Ferguson Riots. The most obvious case was when Rich Lowry, who also fell for the Covington Catholic hoax, wrote about the Zimmerman/Martin case that “Al Sharpton is Right.” [NRO, March 23, 2012, not deleted.]

The final point about litigation working is that, believe it or not, people (including white people in red hats) have rights, and those can be enforced through the courts.

That's why we're suing Colorado Springs over their decision to shut down our conference, and suing PayPal for cancelling our account because we've been called "white nationalist."