Arguably, one of the best things about Monday is the posting of a new PragerU video online. The brief films are aimed primarily at young people who are poorly served by modern education, which seems reluctant to teach the vital historical component of how we got to where we are today.

Interestingly, Churchill biographer Andrew Roberts remarked to interviewer Mark Levin on Sunday, “The problem is that the educational establishment don’t believe in great men and women any longer. They see for ideological reasons of their own, and the idea that no one is greater than anybody else, and so they won’t teach about heroes.”

Founder Dennis Prager testified before a Senate committee last summer about his purpose in creating the videos and dedication to defending free speech in America. 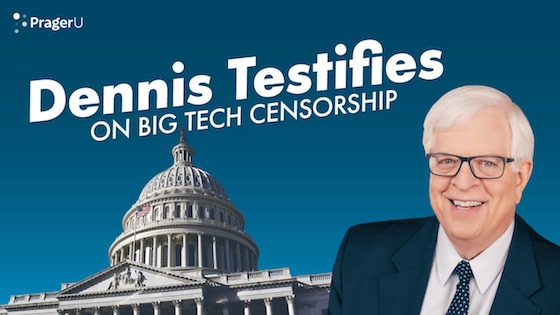 Meanwhile, the mainstream media treats PragerU like an insect being dissected in a high school biology class, analyzing the details at length while missing the big picture. That’s what appeared in the New York Times Sunday front page article titled, “It’s Fox News for Teenagers, in Short Videos.”

That title makes the PragerU videos sound dumbed down, which they definitely are not. The most recent edition, from January 6, features a discussion by Brit Niall Ferguson about the life and influence of Margaret Thatcher, a piece suitable for an educated adult desiring a brief refresher on the unique prime minister.

Still, the article provides history I didn’t know, one example being that Dennis Prager initially envisioned a traditional college but a brick-and-mortar edifice would have been prohibitively expensive.

The Times article was reprinted elsewhere, so click freely on the link following to read the whole piece:

BERKELEY, Calif.—Will Witt walked through the University of California campus doing what he does professionally, which is trolling unwitting young liberals on camera.

He approached students who seemed like good targets: people with political buttons on their bags, androgynous clothing, scarves. It was safe to say that the vast majority here in the heart of progressive culture would be liberal. Mr. Witt, whose bouffant and confident smile make him look like a high school jock from central casting, told the students that he had a question for them. If they agreed to answer, and they usually did, the game was on.

“How many genders are there?” Mr. Witt asked before turning and staring deadpan at the camera. Some people laughed and walked away. Most, knowing the camera was rolling, engaged.

“As many as you want?” a recent Ph.D. student responded, a little confused to be confronted with this question.

After some of the footage was edited in the back of an S.U.V. in a parking lot nearby, the video headed to Prager University, a growing hub of the online right-wing media machine, where Mr. Witt is a rising star and the jokey, Ray-Ban-wearing embodiment of the site’s ambitions.

Last year PragerU videos racked up more than one billion views, the company said. The Prager empire now has a fleet of 6,500 high school and college student promoters, known as the PragerForce, who host on-campus meetings and gather at least once a year for conventions. And this year, the company is expanding its scope. PragerU executives are signing stars of the young new right to host made-for-the-internet shows to fuel 2020 content, including a book club and a show geared to Hispanics called Americanos.

The goal of the people behind all of this—Dennis Prager, the conservative talk show host and impresario of this digital empire, and the venture’s billionaire funders—seems simple: more Will Witts in the world. More pride in American history (and less panic over racism), more religion (specifically in the “Judeo-Christian” tradition), less illegal immigration, more young people laughing at people on the left rather than joining them.

Mr. Witt, 23, said he was raised in a relatively liberal home by his mother, and when he arrived at the University of Colorado in Boulder, he was already leaning conservative. But he found his zeal for the culture war on campus. One of his classes offered students extra credit for going to a political protest. Mr. Witt submitted that he would go to a nearby speech hosted by the right-wing star Milo Yiannopoulos. The teaching assistant told him that would not count, he said.

He was frustrated, feeling lonely and at home watching videos on YouTube. The site prompted him with a bright animation made by PragerU. He can’t remember the first video he saw. Maybe railing against feminism, he said.

“I must have watched every single one that night,” Mr. Witt said. “I stopped going to class. Pretty much all the time I was reading and watching.”

He did not graduate from college.

The videos are five minutes each, quick, full of graphs and grand extrapolations, and unapologetically conservative. Lessons have titles like: “Why Socialism Never Works” (a series), “Fossil Fuels: The Greenest Energy,” “Where Are the Moderate Muslims?” and “Are Some Cultures Better Than Others?”

To the founders and funders of PragerU, YouTube is a way to circumvent brick-and-mortar classrooms—and parents—and appeal to Generation Z, those born in the mid-1990s and early 2000s.

Mr. Prager sees those young people as more indoctrinated in left-wing viewpoints than any previous generation, but also as more curious about the right. For these teenagers, consuming conservative content is a rebellion from campus politics that are liberal and moving left.

“We find more of them are open to hearing an alternative voice than many of their elders,” Mr. Prager wrote in an email. “Many suspect they have been given only one view, and suspect that view may often be absurd.”

The way PragerU presents that “alternative voice” is in the measured tone of an online university, carefully avoiding the news cycle and President Trump. That is part of its power.

“They take old arguments about the threat of immigration but treat them as common sense and almost normative, wrapping them up as a university with a neutral dispassionate voice,” said Chris Chavez, the doctoral program director at the University of Oregon’s School of Journalism and Communication.

PragerU’s website has a fine-print disclaimer that it is not an actual academic institution.

“PragerU’s ‘5 Minute Ideas’ videos have become an indispensable propaganda device for the right,” the Southern Poverty Law Center warned on its blog, citing videos like “Blacks in Power Don’t Empower Blacks,” hosted by the Wall Street Journal columnist Jason Riley, who is black.

Lawrence Rosenthal, chair of the Berkeley Center for Right-Wing Studies, said he has noticed an impact from PragerU’s content. “It sits at this border between going off a cliff into conspiracy thinking and extreme kinds of prejudices in the name of anti-political correctness,” he said.

On PragerU’s website, there is little differentiation between its video presenters. So the late Pulitzer-prize winning Washington Post columnist Charles Krauthammer appears on the same page as Michelle Malkin, the commentator who has defended overtly racist elements of the right. There’s Bret Stephens, the New York Times Op-Ed columnist; Tucker Carlson, the Fox News host; George F. Will, the anti-Trump conservative commentator; and Nigel Farage, the Brexit Party leader. For a teenager approaching the site, each headshot in the same size circle, it would be hard to tell the difference between them all. (Continues)