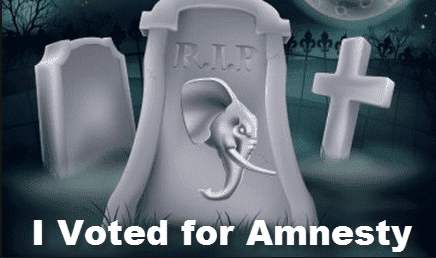 Angry White Dude first won my respect as a polemicist - and because of unflinching realism on America’s race problem. Also on the Bush miasma.

I believe the 2012 debacle really upset AWD, with comparatively limited postings since then. His considered assessment of the situation has now appeared: FOR AMERICA TO SUCCEED, THE REPUBLICAN PARTY MUST BE DESTROYED

This is the fruit of careful, serious thought by a sincere Patriot. It should (but won’t) be considered with close attention by those Inside-the-Beltway GOP parasites who desire longevity.

On the immigration issue AWD says

After losing the 2012 election huge, what is the most pressing issue for the Republican establishment? Passing some form of amnesty that will give voting rights to millions of illegal aliens who will immediately vote for every Democrat on the ballot. Forever! But again, these are the geniuses that allow liberal propagandists like Candy Crowley and Wolf Blitzer to moderate presidential debates. The Republican elite is a special kind of stupid.

I have to disagree with this. The Republican elite is a special type of greedy. AWD touches on this earlier in his essay

Rove and his Republican establishment ilk are not interested in doing what’s in the best interest for America. They are interested in power and money. And that’s it! Sustaining the status quo means business as usual for them and millions in their evil pockets.

Up front and center in the issue of the Republican elite’s abandonment of interest in the concerns of their base is the pernicious influence of the money of Sheldon Adelson and his like.

This is the key problem facing the American Nation in 2014.