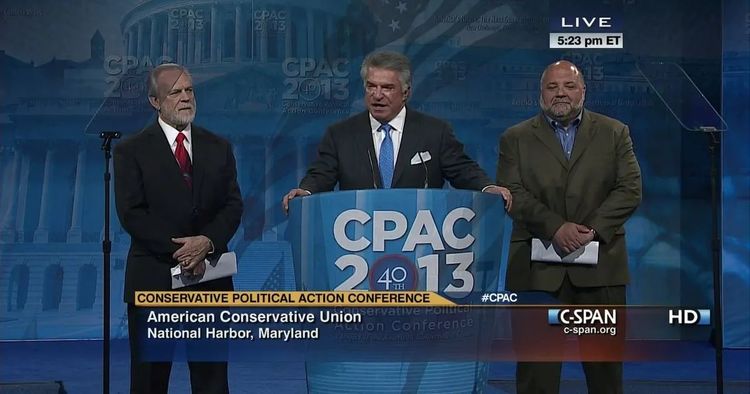 "Every great cause begins as a movement, becomes a business, and eventually degenerates into a racket,” Eric Hoffer is supposed to have said.  Nowhere is this more obvious than with Conservatism Inc., the D.C.-focused parasitical congerie of corrupt interest groups which is now all that is left of the Late, Great American Conservative Movement that carried Ronald Reagan to victory in 1980. And nowhere is it more visible that at the annual Conservative Political Action Conference [CPAC], which begins pre-festivities with the Weyrich Awards keynoted by Senator Ted Cruz tonight (March 12).

CPAC is characterized by massive youth turnout and parties (leading to the popular slogan, “What happens at CPAC stays at CPAC”). This gives it a certain utility in gauging the grassroots mood—for example, VDARE.com Editor Peter Brimelow, observing the first post-Obama CPAC, predicted the fierce backlash that became the Tea Party triumph of 2010.

But Brimelow also noted CPAC’s tight control by a self-interested D.C. in-group. This in-group’s crude (if eccentric) exclusionary policies have now precipitated a number of quarrels even within the Beltway Right.

The exclusion has become especially totalitarian on the immigration issue. In the past, CPAC’s managers have pretended to be even-handed. This year, as POLITICO’s Jonathan Martin and Maggie Haberman report,

Immigration, too, is flaring up as a point of contention. [CPAC sponsor American Conservative Union’s head Al] Cardenas is an outspoken backer of immigration reform [a.k.a. amnesty plus immigration surge], and the CPAC panel on the topic is stacked with like-minded Republicans at a moment when the issue still divides conservatives. [Links added by VDARE.com]

In the short run, however, the CPAC managers’ biggest problem is likely to be with libertarians—CPAC is the ideal setting for the emerging “Liberty Movement” to flex its muscle. Indeed, the Beltway Right is on the verge of being displaced by what might be called Libertarianism Inc.

Immigration patriots don’t have a dog in this fight, but should watch it closely.

Conservatism Inc.’s remarkable collapse of morale following President Obama's re-election is no surprise. It has profited for years by transmuting the grievances of the core American population into an illogical agenda that has nothing to do with defending that constituency’s interests. It drew on the style of Pat Buchanan and Sam Francis, while eliminating intellectual substance, and purging anyone who thought differently. The result is that “conservatism” has become a chaotic morass of irrational (but oddly Politically Correct) conspiracy theories, alarmist rhetoric about foreign policy threats, fanciful historical revisionism, and maudlin nostalgia for a simultaneously traditionalist and anti-racist America that never actually existed.

The Stupid Party is rather, well, stupid. It is incapable of serious thinking on a host of issues, especially those surrounding immigration. The endless search for a vibrant non-white face to front the same platform cannot conceal the reality that Conservatism Inc. is intellectually exhausted. The well has run dry.

Thus, young dissenters against Leftism, who would have been “Movement Conservatives” in the Reagan Era, are looking for something new that can promise victory. They have found it in libertarianism, following the rise of Ron Paul.

Unlike contemporary conservatism, libertarianism provides a coherent worldview. It at least attempts to address the crises that Leftism has created and to provide (if I can be forgiven the phrase) final solutions. For that reason, it attracts much of the better human caliber of the young Right. These activists can at least make the case that if only “the state” is drastically reduced or eliminated, everything from economic recession, to war, to ethnic conflict will be eliminated. Youth is also inherently more attracted to movements with revolutionary overtones. And young libertarians see the problem as the “neoconservatives” who have infiltrated Conservatism Inc.

Beltway conservatives who are wondering what happened to their movement have only themselves to blame. For decades, these clever charlatans slapped Politically Correct “limited government” sheen of sophistry over the actual interests of their unmentionable white middle and working class supporters. Now, a new generation has grown up believing that propaganda.

Conservatism Inc. was shocked in 2010 and 2011 by Ron Paul's victories in the CPAC Presidential Straw poll—and also by the raucous reception supposed conservative “heroes” received. In one especially amusing incident, Donald Rumsfeld and was massively booed in 2011 while receiving the “Defender of the Constitution Award” from ACU head David Keene—as was former Vice-President Dick Cheney.

Conservatism Inc. responded with an elaborate effort to suppress the Paul vote in 2012. The paper ballot was switched to an easier-to-use computer ballot, encouraging more casual attendees to vote. CPAC managers also undertook reforms to prevent “stacking” by libertarians and actively promoted various neoconservative speakers. And there was wailing and gnashing of teeth about the lack of “civility” supposedly shown by Paul supporters.

The intended result was achieved: Mitt Romney won the 2012 straw poll—and, of course, went on to blow the Presidential election.

This year, the battle will be between Conservative Inc. favorite Marco Rubio and Rand Paul. CPAC's changed location to remote Maryland may be part of a deliberate effort to skew attendance and guarantee Rubio's victory.

That said, Conservatism Inc. itself is on the verge of cracking up. Some factions within the Beltway support the libertarian surge—provided they can stay in control.  They want libertarians to stay on the reservation, and not challenge the reigning leadership in policy (and donations).

And FreedomWorks, until recently the home of illegal immigration supporter and corporate lobbyist Dick Armey (there was a predictable dispute over—you guessed it—money) is a pillar of Conservatism Inc. but simultaneously a supporter of Paul, providing a home for popular libertarian activists on staff.

Finally, the Cato Institute occasionally takes time from hailing Open Borders to praise the libertarian revolution and give support to groups like Students for Liberty.

Both nominally anti-Establishment libertarians and Conservatism Inc. get something from this reciprocal relationship. The former gain access. The latter purge away some of the more subversive elements of libertarianism and restructure it to fit within Conservatism Inc. Both have an interest in transforming grassroots American conservatism into an “economistic” movement.

One problem: many younger libertarians do not want to be seen as being on the “Right.” Historically, Conservatism Inc. has been cunning enough to use middle class white Americans as useful idiots. But many of the emerging libertarians are so housebroken to Political Correctness that they can't stand to be in the same room as even implicitly patriotic movements.

Thus the forthrightly left-libertarian Students for Liberty recently attacked the idea of “fusionism” between conservatives and libertarians on the grounds that aligning with the Right leaves libertarians on the “wrong side of history”—along with “reactionaries, racists, sexists, etc.” [The Failure of Fusionism, February 28, 2013 ]Author Clark Ruper argues that libertarians should forge their own identity apart from Right and Left, and join in the never-ending hymn of praise of the Death of the West.

Currently, the debate in libertarianism centers on whether social conservatives should even be allowed to join at all. Glenn Beck, whose muddled musings perfectly encapsulate the ideological flailing of neutered conservatism, has pathetically moaned that he feels “excluded” by libertarians, now that he's reinvented himself (yet again) from a Santorum supporter to a “liberty” activist.

Rand Paul amanuensis Jack Hunter has called for tolerance, arguing that conservatives are still “learning” and that they will come around. But others, such as Alexander McCobin of Students for Liberty, have all but dismissed his efforts, in typically verbose fashion.

Note that none of the supposed socially-conservative libertarians are advocating actually using state power to defend traditional morality. The outreach is only going one way. Both Conservatism Inc. and the new libertarianism share the same view of socially conservative white middle class voter: They are a resource to be mined, rather than a constituency to be championed.

The social conservative faction within Conservatism Inc. is attempting a holding pattern. And it did win a ban on the homosexual group GOProud from this year's CPAC.

But it’s meaningless: many CPAC cosponsors like Cato, Students for Liberty, and other free market groups are enthusiastic champions of gay marriage. Minor conservative celebrities such as S.E. Cupp are ostentatiously boycotting CPAC because it won't let in GOProud. Even National Review is opposing the ban (though, significantly, its call for tolerance only goes Left—there is no plea to welcome back Pat Buchanan—or even Tom Tancredo or Kris Kobach—into the so-called big tent.)

My prediction: Social Conservatism will lose. The highest priority of Conservatism Inc. is still fealty to Mammon. In the long run, the free market faction will drive out the others—and as Marx knew, the greatest enemy of “traditional values” was capitalism. Students for Liberty agrees—but it thinks this is a good thing.

Within a few short years, CPAC will be holding panels not merely discussing how gay marriage is a “conservative” idea, but claiming that “conservatives” invented it. In America today, the only time Christianity is allowed into public life is to promote Leftist causes like amnesty or gun control.

It’s impossible not to laugh at the spectacle of Treason Lobby trucklers like Richard Land, president of the Southern Baptist Convention’s Ethics & Religious Liberty Commission, whining about being treated like the KKK because he also opposes homosexual marriage.

Nonetheless, immigration patriots should ponder carefully the slow death of the conservative coalition.

The traditional three pillars of Reagan style conservatism were

Traditional moral values require at least some sense of community identity and standards. It's for this reason that social conservatives will not be able to forge a separate peace by shilling for amnesty. Social conservatism is, like Conservatism Inc. itself, a proxy for the historic American nation. Leftists and Open Borders libertarians recognize this, which is why they oppose it.

Strong national defense has now, after the disastrous presidency of George W. Bush, become code for “neoconservative foreign policy”. But any policy based on national interest requires the existence of a real people capable of identifying with the state. Thus Scott McConnell at The American Conservative gloats that the neoconservatives will fail precisely because the Third World embarrassment that is replacing the historic American nation will be incapable of sustaining interventionism. (Whether this is worth losing America for is a separate question).

Free market economics. Of course, mass immigration is not a “free market” policy. It is the Viagra of the state, the key to a permanent Democratic majority of enthusiastic supporters of Big Government, and an example of “anarcho-tyranny” rather than government negligence.

But with Murray Rothbard dead, paleolibertarianism suppressed, and young libertarians remaining proudly ignorant of dangerous knowledge, who will say that? If Reason Magazine can bemoan the death of the “California Dream” [How Big Government Is Killing California, by Steven Greenhut, April 27, 2012] while still claiming that America desperately needs more immigrants, what signs are there that the new libertarianism will be any more capable of serious thought?

The result of any libertarian takeover of Conservatism Inc. may be a movement even more hostile to the traditional American nation than Conservatism Inc. Once concepts such as culture, values, and national identity are jettisoned, there is no room for making any non-economic arguments about immigration, or about anything else.

Which provides an opportunity. There is no reason that immigration patriots should go down with U.S.S. Conservatism Inc. As elite opinion solidifies behind amnesty, immigration patriots gain a political opening for a populist movement that can be anti-corporate, economically nationalist, racially realist—and politically dangerous to “conservatives,” progressives, and libertarians alike.

Immigration patriots can build a new movement that can stand up for the historic American nation that the Beltway Right—libertarian and “conservative”—has utterly betrayed.