The joint has been jumping at the Nevada DMV, as thousands of unlawful foreigners have sought possession of driving authorization cards. The new year allows illegal aliens to register to receive a document that permits legal driving within the state.

As usual, greasy politicians in support claimed that the policy would increase highway safety and lead to more insured drivers. However, illegals often purchase insurance in order to register their car or get a driving permit, then cancel it a month later. Sometimes they manage to buy insurance after an accident and get away with it.

The federal Real ID Act prevents the authorization to be used for identification, but that sounds like a squishy proposition. Any business or agency that would accept a worthless Mexican matricula card would likely find the Nevada card legal enough.

A Las Vegas television piece reported that some of the illegals were not prepared to take a written test and flunked it. The excuse was made that they were just nervous because they had never been in a DMV before — poor sensitive Mexicans! The segment also called the foreigners “undocumented citizens” more than once.

Below, illegal aliens flocked to Nevada’s DMVs for new driver’s authorization so they can motor legally to their stolen jobs. 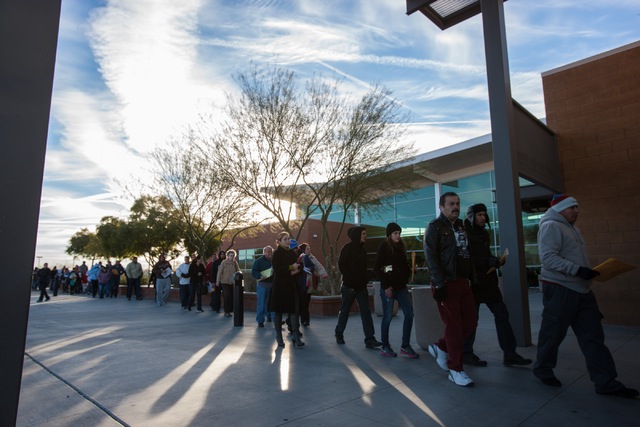 We see in the following news story how thrilled the illegals are to get a mini-legalization. They are pumped about being able to drive without worry of being deported. It’s hard to imagine such excitement about becoming citizens — it wouldn’t happen. The top priority is to make maximum money without fear of deportation. Indeed, a recent Pew poll found that exemption from deportation is more important to illegals than citizenship. Democrats and raza types want to turn them into grateful big-government voters someday soon, but the illegals themselves want the money, period.

Rafael Soto is the odd man out in his family.

His three daughters are U.S. citizens, his wife’s a U.S citizen, but he’s not. He’s still waiting on the federal government to give him that shot under comprehensive immigration reform proposals being considered in Washington, D.C.

As a result, the 44-year-old North Las Vegas resident from Mexico has been working construction jobs without a Social Security number and has been driving illegally in Las Vegas for well over a decade.

But at least part of that immigrant narrative is about to change.

On Thursday, Soto was among thousands who showed up at DMV offices across the Silver State to apply for the new driver authorization card, which allows those who are in the country illegally to drive legally.

Nevada is just the latest in a group of 11 states that are allowing these immigrants to drive. As many as 60,000 immigrants are expected to apply for the cards in the state. The process began Thursday, when Nevada’s new law took effect.

Despite widespread criticism of the driving card law, there were no protests across the state on Thursday, although some of the offices in Las Vegas became so crowded that DMV halted written tests, said DMV spokesman Kevin Malone.

REASONS BEHIND THE BILL
The intention of Senate Bill 303, which passed the state Legislature in the spring, is not only to raise millions of dollars in revenue for Nevada but also to make the state’s roads safer.

Officials say nearly all the holders of the card will have to purchase insurance for any car they operate. They must renew their driving card every year for it to remain valid. They will also have to pass DMV driving tests, which will make roads safer.

If you thought Black Friday after Thanksgiving drew crowds, you should have seen the DMV offices across the Las Vegas Valley on Thursday. Lines formed before dawn; the DMV offices didn’t open until 8 a.m. Later in the day, the wait time was an estimated hour, due primarily to people applying for the new card, DMV officials said.

So coveted is the card that Soto got up at 4:30 a.m. to get the first spot at the DMV office in North Las Vegas on Decatur Boulevard just north of the Las Vegas Beltway.

“This is going to be great, not having to worry about driving anymore, not having to look in the rearview mirror every time you start the engine,” said Soto, who has paid nearly $1,000 in fines after he was stopped by North Las Vegas police on two occasions in the past two years and could not produce a valid driver’s license.

“The first time, it was my windows, they were too dark. The second time, I didn’t do anything wrong. It was just a routine stop, whatever that means. When the police officer found out I didn’t have a license, he ticketed me,” Soto said.

Similar stories were swapped at the DMV office on East Sahara Avenue near Eastern Avenue.

Not everybody was from Mexico. There were a few from Central America, like Oscar Pamian, 32, of Guatemala, who said he has paid more than $6,000 fines in the decade he has been driving illegally in Nevada.

“Now I won’t be so fearful of getting pulled over on the street,” said Pamian, who once made the mistake of not fixing a broken taillight and suffered the consequences of not having a driver’s license.

CRITICS BLAME THE FEDS
Critics of the new law say the issuance of such cards is proof that Nevada is condoning the presence of those who illegally crossed the border to get to the Silver State.

They have long cast blame at the federal government for failing to secure the border with Mexico and now they’re just as angry at the state for turning what they believe is a blind eye to the issue.

But politicians who supported the bill, including its co author, Mo Denis, a Democratic state senator from Las Vegas, said the card is something that Nevada “desperately needed” in the absence of federal immigration reform that would legalize the estimated tens of thousands of residents who have lived in Nevada for years.

“They’re already driving, so why not ensure that they already know the laws? We need to ensure that our roads are safe. This benefits everyone in Nevada, not just the people getting the cards,” said Denis, the Senate majority leader.

The throngs who showed up at DMV offices on Thursday would have loved to get the same kind of driver’s license that legal residents can obtain but instead found themselves applying for the special card, which cannot to be used for identification purposes.

One such person was Nohemi Cruz, who showed up at the Sahara DMV office. She came to the U.S. at age 13 and has lived here for more than two decades. Five years ago, she was pregnant and decided to drive illegally because she had to get to work.

“I needed to drive because I was pregnant and needed to work on the Strip at 4 a.m,” she said.

“I always worry that I’ll get pulled over or get in an accident with my kids in the car because I don’t have insurance,” Cruz said.

RELIEF FROM FEAR
But she’s not the only fearful one. Plenty of those living here illegally have been forced to limit their driving from home to work to avoid traffic infractions.

“I feel like I don’t even have a social life,” said Gustavo Santiago, 33, who came to Nevada from Mexico eight years ago. “I am not at liberty to move around the city because I am worried I’ll get pulled over for something small and have to pay a huge fine.”

Santiago, who waited patiently for his turn at the Henderson DMV, has car insurance with his Mexican driver’s license. But he said that insurance is too costly. He’s hoping that the new driver’s card will not only allow him to drive legally but will also help to lower his premiums.

“Insurance and fines are expensive,” he said. “I am ready to not have to worry about that anymore.”

The worry is a financial one for most immigrants who pay high fines, even in cases when they don’t commit traffic infractions.

“I was stopped at a light and somebody hit my car, but I was the one who got a ticket,” said Leodegario Ruiz, 53, who has been driving illegally in Nevada since he came from Mexico 10 years ago.

“Now I will be able to drive more safely and not have to worry about others’ mistakes on the road,” he said.