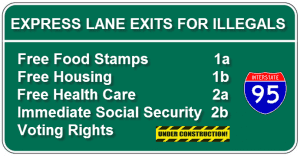 I may be disappointed in Thomas Ravenel, the newly declared independent contender for Lindsey Graham’s South Carolina U.S. Senate seat, but Graham is frightened of him.

In a further extension of his ludicrous MSM over-exposure, Graham got to use “Face the Nation” to showcase new posturing:

Sen. Lindsay Graham (R-S.C.) said Sunday that thousands of young children crossing the U.S. border must be sent back to their home countries to dissuade others from sending their family members here.

Graham said the Obama administration must be clear in its policy that there should be no expectation that unaccompanied children will be able to stay in the United States.…"this is a specific problem created by the impression that if you get to America that you can stay,” Graham said

Through his fanatical and long-time support of Amnesty/Immigration Acceleration Graham is as responsible as anyone for the current disaster. His election year stances are worth no more than John McCain’s 2010 promise to “complete the dang fence” (which, if kept, as Federale points out today, could have prevented this mess).

However, what Graham has said is more than anything from Boehner, Kevin McCarthy or Mitch McConnell.

So Ravenel has achieved something. He could go on to point out Graham’s hypocrisy and culpability on this issue and note Graham seems to have said nothing about improving enforcement. He could challenge Graham to propose the correct Constitutional remedy for Obamacrat lawlessness: Impeachment.

Probably that would too deeply offend his boneheaded libertarian friends. But on the basis of today’s performance, even a few scowls and mutterings could have Lindsey Graham shrieking interesting things.