Who would have thought that the LA Times would dig up deportation data unfriendly to the administration and then plunk the graph on its Sunday front page? Unlikely, yet it did print a devastating chart: 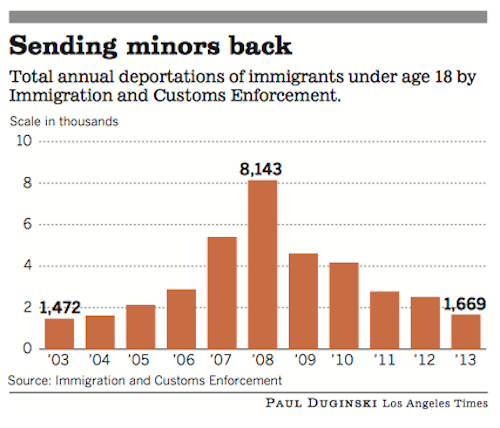 The deportation figure would have been even more shocking had it been paired with a graph showing the kid surge over recent years. But maybe that’s too much to expect. 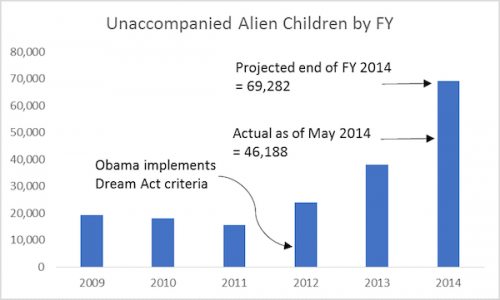 Perhaps the liberals at the Times are considering how the open-border influx will affect their region in terms of schools and crime.

Will there be back-to-school stories in September about the struggle of local classrooms to cope with 10,000 new non-English-speaking foreign kids? The number is just a guesstimate, but is not unreasonable considering Los Angeles County’s enormous Hispanic population.

The current government count of illegal alien kiddies is supposedly 50,000 (even though 240,000 Central Americans have arrived since April) — suspicious, no?

Even assuming the 50,000 number is true, there will be thousands more foreign kids in the coming months who will need to be put in school this fall, and the southland is diverse in Hispanics beyond Mexicans. As of 2010, Los Angeles County had accumulated 358,825 Salvadorans, 214,939 Guatemalans, and 42,901 Hondurans, so plenty of magnet parents exist.

Another future calamity will be hugely increased gang crime, since the “teens” are not being checked for age, and the human flood surely includes many young cartel criminals. A few years back, San Francisco discovered one of its pampered “juvenile” crack dealers was actually 25 — multiply that by thousands.

Back to deporting alien kiddies:

President Obama and his aides have repeatedly sought to dispel the rumors driving thousands of children and teens from Central America to cross the U.S. border each month with the expectation they will be given a permiso and allowed to stay.

But under the Obama administration, those reports have proved increasingly true.

The number of immigrants under 18 who were deported or turned away at ports of entry fell from 8,143 in 2008, the last year of the George W. Bush administration, to 1,669 last year, according to Immigration and Customs Enforcement data released under a Freedom of Information Act request.

Similarly, about 600 minors were ordered deported each year from nonborder states a decade ago. Ninety-five were deported last year, records show, even as a flood of unaccompanied minors from Central America — five times more than two years earlier — began pouring across the Southwest border.

The previously unavailable deportation data are likely to fuel the political debate over whether Obama administration policies are partly responsible for the 52,000 children and teens who have surrendered to or been caught by Border Patrol agents since last October, spurring fresh concerns about U.S. border security and immigration law.

Most of the minors are being held in Border Patrol stations in Texas and Arizona, and in emergency facilities set up by the Department of Health and Human Services on military bases and other sites. About 11,000, however, were from Mexico and were swiftly bused back across the border, as the law allows.

Obama administration officials deny that lenient policies — including a 2012 program that allowed immigrants who had entered the country illegally as minors before June 2007 to apply for deportation deferrals — have encouraged the sudden surge.

They instead blame a 2008 law signed by Bush that made it nearly impossible to repatriate unaccompanied minors to Central America without letting them appear before an immigration judge.

A mounting backlog in immigration courts since then has allowed most Central American minors to stay for years while their cases wend their way through the legal system. Once they are assigned to social workers, as the law requires, the overwhelming majority are sent to live with their parents or relatives in the United States, officials said.

Organized crime groups in Central America have exploited the slow U.S. legal process and the compassion shown to children in apparent crisis, according to David Leopold, an immigration attorney in Cleveland.

He said smugglers, who may charge a family up to $12,000 to deliver a child to the border, often tell them exactly what to say to American officials.

“The cartels have figured out where the hole is,” he said.

About 60 criminal investigators have been sent to San Antonio and Houston to try to infiltrate these networks and prosecute the smugglers who bring the children into the United States, officials said.

Obama last week asked Congress to change the 2008 law to give the head of Homeland Security, Jeh Johnson, greater discretion to send children back to Guatemala, El Salvador and Honduras more quickly.

But Obama is likely to face stiff opposition from fellow Democrats, who have vowed to block narrow changes to immigration laws. Senate Democrats overwhelmingly backed a comprehensive immigration bill last summer only to see the measure die in the GOP-led House.

“He can’t get it passed,” a senior Democratic staffer in the Senate said of Obama’s request.

As it now stands, the 2008 law guarantees unaccompanied minors from those countries access to a federal asylum officer and a chance to tell a U.S. judge that they were victims of a crime or face abuse or sexual trafficking if they are sent home. If the claim is deemed credible, judges may grant a waiver from immediate deportation.

“Word of mouth gets back, and now people are calling and saying, ‘This is what I said’” in court, said a senior U.S. law enforcement official, who was not authorized to speak on the record. “Whether it is true or not, the perception is that they are successfully entering the United States…. That is what is driving up the landings.”

The increase has been dramatic. For most of the last decade, U.S. agents apprehended fewer than 4,000 ?unaccompanied children from El Salvador, Guatemala and Honduras each year, according to U.S. Customs and Border Protection figures.

The number of unaccompanied Mexican minors apprehended dropped for several years, but rose from 13,974 in 2012 to 17,240 last year. Most are bused back, although some are permitted to seek asylum.

The deportation data released to The Times do not distinguish between children who entered the U.S. with a parent and those who came alone and are less likely to be sent back. Children who arrived alone but turned 18 during deportation proceedings are counted as adults.

The figures also don’t include Mexican children who were turned back at the border by Border Patrol agents, as the law allows in their cases.

The data also shows more minors are sent home to Guatemala than to El Salvador or Honduras.

Rural Guatemala is desperately poor, but U.S. law does not recognize poverty as an acceptable reason to avoid deportation. Judges tend to be willing to protect children from specific threats of violence, however, and Honduras and El Salvador suffer some of the world’s highest peacetime murder rates.

When Congress returns from the holiday weekend on Monday, the Obama administration will ask lawmakers to appropriate more than $2 billion to cover the mounting costs of the crisis, including more staff for border stations, more detention facilities and more social workers.

In the meantime, extra asylum officers, immigration judges and prosecutors have been rushed to the border to help conduct initial interviews and start deportation proceedings.

Border Patrol agents in California have begun using video links to interview children in Texas, to speed up the process of sending them home or handing them over to social service officials.

The sudden surge has surprised officials because illegal immigration has fallen sharply overall. Experts attribute the drop to fewer job opportunities in the U.S. and to the doubling in size of the Border Patrol since 2004, which has made the crossing more dangerous and expensive.

Speaking in the Rose Garden last week, Obama said he was sending a “clear message” to parents in Central America not to send their children north in hopes of being allowed into America.

“The journey is unbelievably dangerous for these kids,” Obama said. “The children who are fortunate enough to survive it will be taken care of while they go through the legal process, but in most cases that process will lead to them being sent back home.”

But that isn’t always the case. The 2008 law signed by Bush expanded legal protections for young migrants. The changes were intended to prevent immigration officials from inadvertently sending them back to pimps and drug violence.

The law, for example, expanded the ability of children who were abused or abandoned to be granted “special immigrant juvenile status” to stay in the country, and to eventually apply for lawful permanent residency.

Called the William Wilberforce Trafficking Victims Protection Reauthorization Act, the 2008 law was named for the English abolitionist who championed the bill in Parliament that ended the slave trade in the British Empire in 1807.

The U.S. law, which sought to crack down on modern-day slavery and the trafficking of children, passed easily by a voice vote in Congress with broad support from both parties. Bush signed it shortly before he left office in January 2009.

Former U.S. Rep. Howard L. Berman (D-Valley Village), who served from 1983 to 2013, was one of the sponsors of the 2008 law, and defended it this week as necessary to protect children. He blamed the violence in parts of Central America for the influx of children, and said he wasn’t sure whether the law needed to be changed.

“What do you do with the ones that come from Central America? Do you load them all on a plane and see who comes and meets them at the airport?” Berman asked in a telephone interview.

He said the authors of the law did not foresee that children and teens would flood the border and overwhelm emergency shelters and child-care facilities, or that immigration courts would clog so quickly.

“Obviously this particular result was not anticipated,” Berman said.

Oh, but it was anticipated. In January the administration advertised for escorts for 65,000 alien children.