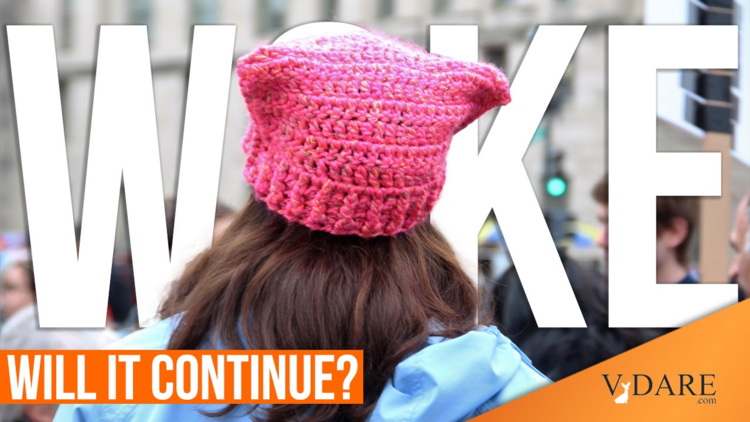 Yes, The Woke Revolution May Be (Nearly) Over

An interesting piece on Substack by N. S. Lyons garnered a great deal of attention recently. Entitled “No, the Revolution Isn’t Over,” January 18, 2022] it insisted, in the words of its pithy subtitle, that “none of the fundamental drivers of ‘Wokeness’ have relented” and, if anything, they are going to get worse because Generation Z  is “super-Woke” based on assorted measures, from their obsession with racism to their views on “intersectionality.” For example, 82% of 18-24-year-olds in the U.K. back Leftist parties. I disagree, for several reasons.

Lyons’ piece then listed, in considerable detail, the assorted factors he believes are involved in Wokeness—such as its de facto religious character, elite overproduction (leading to too many graduates and their fighting for elite places) and Woke control of important institutions.

Personally, I was struck by Lyons’ tone, dismissive and mocking of those who might disagree with him. Perhaps this tone does not reflect his attitude and he simply believes—probably correctly—that more readers will make it to the end of his essay if it is peppered with rhetoric and sarcasm. For example:

If we assume any of this may be causally related to the Revolution, the real question for us here is: has any of this gotten better? Of course not! . . .  (Like, do [anti-Woke conservatives and moderate liberals] even read the pages and pages of erudite Substack anthropology on the topic? No?

A less charitable interpretation, however, is that Lyons—for whatever reason, maybe the desire for a world that makes sense—harbors secret doubts about his own thesis. Subject to the cognitive dissonance—the unpleasant sense of psychological conflict—that this involves, he deals with the problem by dismissing these secret doubts with emotional flourishes.

For there are a number of problems with his argument.

First, as I explore in detail in my forthcoming book—The Past Is a Future Country: The Coming Conservative Demographic Revolution—although Generation Z is indeed strongly Leftist, it is also strongly polarized. A sub-section of it, a greater sub-section than among Millennials, appears to be reacting against Wokeness. As I and co-author J.O.A. Rayner-Hilles state in the book:

Britain’s large-scale YouGov poll has found that, as a rule, the younger people are, the more liberal they tend to be. However, this is not the case with those aged 18, when interviewed in 2020. This cohort is as liberal as people who are 40 years old. Conservatism tends to increase with age, due to people becoming more Conscientious (rule-following, high in impulse control), less open to new experiences, and less tolerant of ambiguity. Thus, a change is happening among the very young. According to YouGov, identification as “right-wing” falls to 27% among 26-year-olds and then rises to 40% among 40-year-olds. This cannot be because 18-year-olds have not been to university yet, a process which might inculcate them with liberal ideas. This is because the same data find that the age of peak liberal identification is becoming older, when you compare YouGov surveys conducted in different years. So, there seems to be a fundamental shift occurring, consistent with the long-term breeding model for right-wing traits, finally beginning to bear fruit among the "Zoomer" generation.

This is congruous with the fertility patterns than we analyze in the book, based on America’s General Social Survey. The key predictors of fertility in this survey are conservatism and religiousness and these appear to be as much as 70% a matter of genetics.

In addition, when you control for intelligence, something which negatively predicts fertility, then conservatism and religiousness are the overwhelming predictors of fertility.

What this will result in, of course, is a “Conservatism Promotion Effect” wherein we will witness upward movement into elite positions of right-wing religious people—“Nick Fuentes–types” as we term them—as the Left simply don’t have enough children to replace themselves.

In other words, we would predict that there would be a reverse “March Through the Institutions.” This would result in conservatism being associated with power and runaway conservatism—just as we now have runaway liberalism—as reasonably intelligent conformists try to outdo each other in signaling their conservatism.

Intelligence is associated with “Cultural Mediation,” with being able to and wishing to force yourself to adopt the dominant set of values, understanding the social benefits of so doing.  Those with lower IQ would be less able to understand this and would lack the “effortful control” to force themselves to believe in conservatism, so they would be the remnant liberals just as many working-class people now are the remnant conservatives.

Of course, if this polarization continues—and we would expect it to as declining IQ and increasing genetic and ethnic diversity results in collapsing trust—then we would predict that nation-states as currently constituted would start to break up. As we observe in the book, this always occurs during the “Winter” phase of civilization and based on every marker of “winter” you can think of—immigration, debasement of traditional religiosity and all it upholds, feminism, tolerance of homosexuality, Nihilistic religiosity—we are in the same period that Rome, Athens and Baghdad were during their collapse. As Sir John Glubb observed in his 1976 book Fate of Empires, all of these factors were prominent during the collapse of these earlier civilizations.

The second problem with Lyons’ piece: a period of extreme individualism—which is what we are in currently, stressing the importance only of what Jonathan Haidt calls the “Moral Foundations” of “Equality” and “Harm Avoidance”—leads to increasing to dysphoria and chaos. This is because humans, being pack animals, are also evolved to value the group-oriented foundations of Obedience to Authority, In-group Loyalty and Sanctity, as set out by psychologist Jonathan Haidt [Liberals and conservatives rely on different sets of moral foundations, by J. Graham et al., Personality Processes and Individual Differences, 2009].

As we discuss in the book, studies, by Haidt and his team, indicate that “conservatives” value all five foundations equally. Liberals only value the individualizing foundations. Accordingly, there is asymmetric empathy between conservatives and liberals. Conservatives sympathize with liberals but liberals do not sympathize with conservatives. The result is that, across history, culture always moves leftwards, until society is so polarized, group unity is so weak, and so many people are so dysphoric, that there is a right-wing backlash.

We examine in the book how this “runaway individualism” may have occurred: due to weakening Darwinian selection pressures towards group-orientation and due to increasing luxury and thus decreasing levels of intergroup conflict, we have become more individualist. However, our individualist culture is indoctrinating people to be materialists and to not have children. This is a new “crucible of evolution,” which will select for those who genetically strongly desire children. And these are the extremely religious and extremely conservative.

So, a backlash is extremely likely, though it will be a backlash in a context of societal collapse, due to collapsing average IQ.

Usually, however, in history, the conservative backlash goes too far. It is spearheaded by extreme conservatives—who are high in group-oriented foundations but low in individualizing ones—and it results in the chaos of war, and, thus, eventually, a liberal backlash. Interestingly, in the 1950s, the last gasp of the conservative society, conservatives pushed the country in a more conservative direction—persecuting homosexuals, for example—as if they sensed that they (the conservatives) were losing their grip. And, of course, in the 1960s they duly did.

We should not forget that in the 1960s and 1970s, the world was extremely left-wing, to the extent that right-wing militias were being set up in parts of Britain due to fear of civil war. Of course, the 1980s witnessed, as we discuss in detail in the book, a right-wing backlash in both Britain and America.

Lyons’ essay is distinctly America-centric. No country with an IQ of below 95—with the exception of Ireland, due to British influence—has even gone seriously Woke, possibly due to low IQ people being too, in effect, unable to reason away their instincts.

And, furthermore, Wokeness is not static. It is evolving, seemingly into a kind of ethno-nationalism for non-whites living in Western countries. This could evoke a nationalist reaction from the “natives” and appears to already be doing so via mass protests that are, really, about displacement.

Lyons may be correct that “the revolution isn’t over.” However, he seems to imply that it will go on for a very long time indeed. But we have been at similar points in history to this before. It will not go on forever or even for a very long time. There will be a right-wing backlash and, eventually, we predict, an extreme right-wing backlash as polities start to break-up.