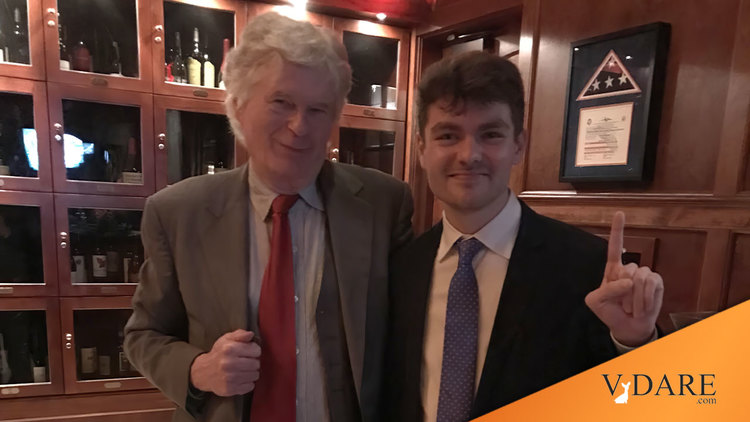 The extraordinary Nick Fuentes's speech "We Will Take Back Our Country" at last Friday's AFPAC III conference (yet another triumph!) included in its opening graceful tributes to Michelle Malkin, Jared Taylor, Congressman Steve King, and myself:

They are trying to do everything to stop us. In fact, we talked to hotel security: they're calling in bomb threats at the hotel—do they think that a bomb threat is gonna stop America First? I'll tell you this, nothing will stop America First! [chants of “America first”] 's right, nothing can stop an idea whose time has come. And the time for America First is right now. Now before I begin, of course, I want to thank all of our speakers tonight. Can we get another round of applause for our speakers?

And I also want to acknowledge our distinguished special guests first. The legend Michelle Malkin. Can we give it up? For Michelle? Here she is—she is brilliant. She is beautiful. She is the Mommy of this movement. And nobody is going to mess with Mommy! Am I right? Nobody messes with Mommy. Two years ago, her act of courage, her refusal to disavow the people in this room, sparked a fire and that fire has only grown brighter with each passing day since. And now where we are two years after the Groyper War—can you believe that? Two years. The light from that fire is blinding, blinding. This year we welcome back to the conference the legendary Representative Steve King from Iowa.

Representative King, you are a hero. You are an inspiration to everyone in this room. Absolutely. I have to say, you know, everybody, they say such nasty things about him but he's really like the nicest guy I've ever met. I had dinner with him twice last year, I saw him today. This is a good man. But you know [it] reminds me of what the Bible says. If the world hates you, remember it hated Jesus Christ first. So you're in good company, Representative King. You're in good company.

We have here Peter Brimelow with us tonight. [applause] He is the founder and editor of VDARE, a pioneer and a visionary, a visionary in the cause to reduce immigration and preserve our American identity. Please give it up for Peter Brimelow.

And this is a special one for me because you know, when I got my start years ago, this is one of the first people that I met. He was very influential to me and helped shape my views. A personal hero and of course I spoke at his conference—one of the first ones that I spoke at. He is the founder of American Renaissance. He is a legend. Jared Taylor is with us tonight .[applause] Please.

And I want to say Jared Taylor has been doing American Renaissance for 30 years. And I look at the political conversation today and it wouldn't be the same without him. But you know what? People these days say some of the things that he says now, even on Fox News and in popular circles, but show me somebody who was saying those things when it was not popular, show me somebody that was standing up and speaking the truth when nobody else was. Jared Taylor did that for 30 years and we acknowledge and we remember that and we honor his legacy here tonight. Thank you for being here. It is an honor.

It was also great to meet so many VDARE.com fans among the stunningly large audience.