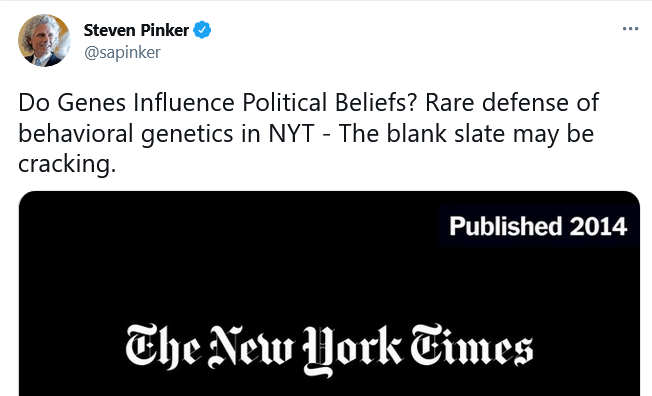 Do Genes Influence Political Beliefs? Rare defense of behavioral genetics in NYT - The blank slate may be cracking. http://t.co/KDIkuzyVWj

There would be nothing unusual about Nicholas Wade putting this in the NYT, but it is odd to see it from Thomas Edsall, a political rather than scientific correspondent. 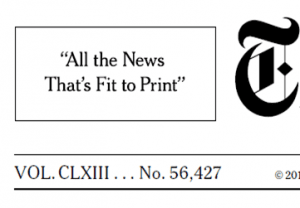 Edsall is talking about research which asks whether conservatism, or "traditionalism" is hereditary. [“Obedience to Traditional Authority: A heritable factor underlying authoritarianism, conservatism and religiousness,”, by  Steven Ludeke, Wendy Johnson, and Thomas J. Bouchard Jr, Personality and Individual Differences, August 2013]

Edsall comes out in favor of intellectual freedom, in a modified, limited way:

Why are we afraid of genetic research? To reject or demonize it, especially when exceptional advances in related fields are occurring at an accelerating rate, is to resort to a know-nothing defense. A clear majority of those involved in the study of genetics, neuroscience and evolutionary biology are acutely aware of the tarnished research that produced racist, sexist and xenophobic results in the past. But as the probability of a repetition of abuses like these diminishes, restrictions on intellectual freedom, even if they consist only of psychological barriers, will prove counterproductive. We need every tool available to increase our understanding of our systems of self-governance and of how we came to be the political animals that we are.

What he forgets is that the problem isn't the questions, it's the answers. And from the point of view of New York Times approved egalitarianism, the science is always going to come up with the wrong answers.

The "racist, sexist and xenophobic results" he's talking about are what we call "Hatefacts", and they're what the New York Times keeps condemning. They've condemned

In each case the people condemned were as right as Galileo, but the New York Times hated them for the answers they got—that's why  they're "afraid of genetic research."