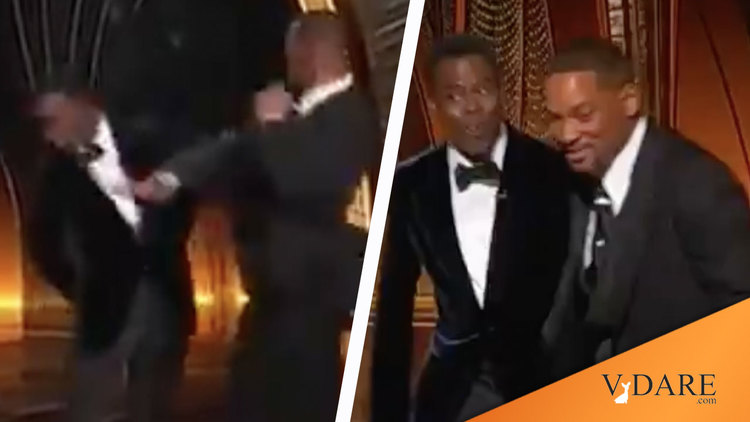 Will Smith, Chris Rock, And A Weird Thing You Didn’t Know About Evolution

Sunday night’s  on-stage assault at the Oscars—in which black actor Will Smith slapped black comedian and MC Chris Rock for making a joke about Smith’s black wife Jada Pinkett Smith’s baldness—was ridiculed on Twitter as “Oscars So Black.” This reference to the earlier “Oscars so White” meme bemoaning the supposed under-representation of black people as Oscar winners [The lack of diversity among the 2020 Oscar nominees feels disappointingly familiar, by Emily St. James, Vox, January 13, 2020] was particularly cutting, because it was so obviously true. As I have charted in detail in my 2020 book Making Sense of Race, African-Americans—compared to White Americans—are, on average, and for powerful evolutionary reasons, more aggressive, more violent and more sexually promiscuous, with Smith’s wife’s extramarital affair possibly being relevant to his reaction on some level. Specifically, black people have higher levels of testosterone than Whites, when imposing relevant controls such as age and obesity. But they have smaller testicles.

My Danish colleagues Emil Kirkegaard and Prof. Helmuth Nyborg and I have demonstrated this interesting phenomenon in a recently published study in Mankind Quarterly: “Europeans Have Larger Testes than Sub-Saharan Africans but Lower Testosterone Levels.”   Our paper drew upon the Vietnam Experience Study which involved the mental and physical examination of 4,462 US soldiers. About 60% of these had served in Vietnam and the rest were controls who had served in other places such as Korea. The data were collected between 1965 and 1971 and then there was a follow-up study between 1985 and 1986. Testosterone levels were measured via blood analyses. There was a clear difference between the 3,654 whites and the 525 blacks. Blacks had higher testosterone levels than whites. (The study also sampled Hispanics, Native Americans and others but the numbers were too small to produce statistically significant differences.)

But in addition, blacks’ testicles were significantly smaller than those of whites. Testes were initially examined using a caliper to measure the long axis of both testes. However, after January 1st, 1986, by which time approximately half of the veterans had been examined, the caliper was replaced by something called Prader’s Orchidometer in order to improve precision. This involved the medical examiner standing in front of the subject and palpating one of subject’s testicles in his hand. In his other hand, the medical examiner would hold Prader’s Orchidometer. This is a string on which are 12 testicle-shaped beads. 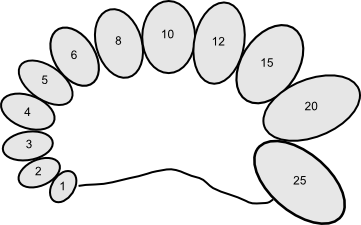 He would go through the beads until he found one that felt the same size as the testicle that he was caressing with his other hand. The medical examiner would then repeat the process with the second testicle. This may seem bizarre but, as we discuss in our paper, this method of testicle-size measurement has been shown to be extremely reliable.

And the result? White people’s average testicle size is significantly larger than that of blacks. Now why would this be?

Humans, on average, have about double the number of female ancestors compared to male ancestors. This is because roughly 80% of females who reached maturity had children, whereas only 40% of males ever did. This is, in turn, because females were strongly attracted to high status males—who would have access to more resources and would be better at winning fights, implying genetic health—resulting in polygyny and, thus, a relatively small number of males dominating the gene pool.

However, there are racial differences in the extent of this. In Africa, a very small number of males dominated the gene pool, while outside of Africa this was far less pronounced. In other words, outside of Africa, there was a greater movement in the direction of monogamy.

Why would this be the case? Well, in an easy, unstable ecology there is no need for males to cooperate with each other, so one male can get by with his harem of females. As the ecology becomes harsher and more predictable, then individuals are more likely to survive as part of groups, meaning that they have to learn to cooperate. This would cause testosterone levels to go down—as testosterone is associated with poor impulse control and low levels of altruism—but it would also lead to a male hierarchy, perhaps with some Beta males finding that some females were prepared to have sex with them.

But, more importantly, from the perspective of the Alpha male who has to invest in his offspring so that they survive, it opens up the possibility of cuckoldry. As such, it would make sense to produce more sperm as an insurance policy against your female having had sex with another male. Such an ecology would, thus, introduce sperm competition.

Testicles are s[erm factories, so testicles would necessarily get bigger. This is the situation of chimpanzees. They live together in highly social groups, meaning that there is every opportunity for a female to have sex with multiple males. So, the males have larger testicles than gorillas; with gorillas not needing larger testicles because they are unlikely to ever be cuckolded.

This applies to white-black differences. Evolved to a relatively easy yet unstable ecology, blacks, compared to whites, don’t need to cooperate as much. They, thus, create smaller and weaker social groups with less of an opportunity for cuckoldry. Moreover, they invest less in their offspring anyway, so it matters less if they are cuckolded.

Whites create large and highly bonded social groups, investing a great deal of energy in their offspring, which white males have with a smaller number of females, with whom they have less sex, so that they  have energy to invest in the offspring. It thus matters a great deal if males are cuckolded, and there are more opportunities for this to occur. As such, they need to produce more sperm, resulting in larger testicles.

In my book J. Philippe Rushton: A Life History Perspective, I showed that Rushton ignored evidence from a French nineteenth century surgeon who asserted that, in his experience, whites had larger testicles than blacks and East Asians had the smallest. Rushton did this, I suspect, because he thought that it didn’t fit with his model of blacks being the fastest “Life History Strategists”—adapted to an easy, unstable ecology—and East Asians being the slowest.

But it does fit and the surgeon’s impressions were correct. Whites have larger testicles, on average, than blacks.