It is now clear that our once highly respected popularizer of the latest scientific research, Scientific American, is hopelessly misnamed.

Clearly, any “Managing Editor” of such a magazine should be devoted to science and, thus, to placing the pursuit of empirical truth above all other considerations. However, a recent ad for this very position tells us that Scientific American is committed to “diversity, equity, inclusion and social justice in our workplace and our journalism.”

Qualifications for the open Managing Editor position at Scientific American include a "commitment to advancing diversity, equity, inclusion and social justice."

And with this single phrase, @sciam demonstrates it has subverted science and truth to politics and activism. https://t.co/1XdBLSyo7g pic.twitter.com/iV1NVJkDHh

In other words, the magazine will misreport, or fail to report, scientific discoveries if they in any way question, or even if they fail to directly promote, Woke dogmas.

Clearly, with this policy, America’s oldest continuously published magazine is not only failing its science-enthusiast readers, but it is failing anybody who is not a Woke ideologue.

It first came to our attention in 2008, just prior to the “Great Awokening,” which seems to have started in about 2010 [Our Research Shows the 'Great Awokening' Preceded Trump—and Outlasted Him, by David Rozado et al., Newsweek, September 7, 2021]. In 2008, Steve Sailer reported that Scientific American had  declared  “War on Occam’s Razor.” The lack of scientific integrity in the article which Sailer quoted was so obvious that he made no further comment. “There is nothing more painful to me at this stage in my life, than to walk down the street and hear footsteps and start thinking about robbery—then look around and see somebody white and feel relieved,” Jesse Jackson was quoted as saying. This was put down to “unconscious bias” rather than the overwhelming evidence that street muggers in U.S. cities are likely to be young, black men [see Why Race Matters, by Michael Levin, 2005].

This was, maybe, a subtle foreshadowing of what was to come. The collapse of Scientific American’s once-firm scientific foundations really only became clear in 2014. This was the year in which Nicholas Wade published his cautious defense of the reality of important genetic race differences, A Troublesome Inheritance, and it was also the year that the Woke Mob was sufficiently organized, due to the rise of social media perhaps, to be able to seriously pressure this prestigious magazine.

In April 2014, a doctoral student called Chris Martin argued in a Scientific American blog that female under-representation in scientific fields may be due not only to “past discrimination” but also because of “innate sex differences.” “This slovenly article above is so full of outdated information it is painful,” Woked one commentator among many. Martin was duly fired.

Then in May, Ashutosh Jogalekar gave a relatively favorable review of A Troublesome Inheritance, stating that the book confirmed the need to “recognize a strong genetic component to [social and cognitive] differences.” The backlash was enormous but “science” was still sufficiently important to Scientific American that, in July, the blog editor bravely defended the reviewer. However, Jogalekar then wrote a piece in which he defended the scientist and pick-up artist Richard Feynman, dismissing Feynman’s “sexist” behavior as merely reflecting the “male-dominated American society in the giddy postwar years.” The text was memory-holed and this time Jogalekar was fired—covered by VDARE.com here, here, and here.

By October 2014, John Derbyshire was telling us that both the academic journal Nature and Scientific American had descended into “Cultural Marxism,” which was what we called “Woke” nearly a decade ago. But there was a gap of three years before the magazine did something else seriously Woke, which is giving a transwoman free rein to talk about how “she” really is a woman but only realized it in the second half of “her” thirties.

And, as of 2017—we’re during the Trump Presidency now, so the raging Left is in runaway rage mode—the starting pistol is finally fired. Scientific American rapidly and manifestly turns to the “Dark Side” in scientific terms. In December 2017, we have British-Indian anti-science journalist Angela Saini arguing in the magazine that there are no innate sex differences in psychology, which is manifestly untrue. By January 2018, she’s back, maintaining that there’s no sexism in hunter-gatherer tribes, the ones where men hunt and women don’t. A few months later, Jeremy Adam Smith is arguing in the magazine that white men are stockpiling guns because they’re paranoid and weird, not because they have legitimate fears about the collapse of law and order in an increasingly non-white society, the collapse of law and order that you see in South America and Africa.

Scientific American  heavily promoted Angela Saini’s anti-science book on race, Superior, in 2019 and then, in 2020, we see its “keening, slobbering, self-flagellating confessions of guilt,” as John Derbyshire put it, as it apologizes for its coverage of race a century earlier. 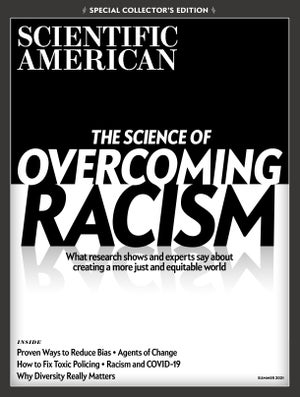 In the same year, the magazine treated us to a piece on “How to Unlearn Racism,” implying that it really is now part of the Woke Cult: the new religion of anti-racism in which you can never be sure that you’re “anti-racist,” just as Calvinists can never be sure they’re part of God’s Elect. So, you deal with it via self-flagellation, anti-racism signaling (to be reassured of your righteous non-racism) and projection.

This politicization of the magazine coincides with, of course, with the politicization of science and growing public distrust in it. By the end of 2021, when a genuine, fearless scientist—E.O. Wilson—died, Scientific American ran a piece by an African-American nurse on his “racist legacy.” Forget his extraordinary contributions to understanding human psychology and biology; he dared to cautiously explore empirically clear racial differences.

And this brings us back to 2022, when the magazine’s “Managing Editor” is to be appointed based on his, her or their (singular) Woke credentials, rather than based on ability and scientific knowledge. 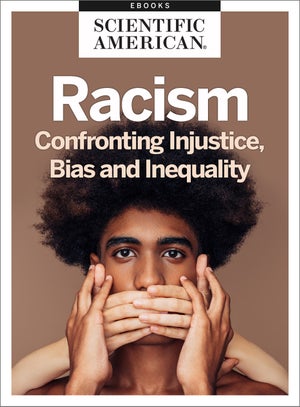 What is the cause of this change? Well, obviously there’s the way in which Leftists—who are highly Machiavellian, i.e., have a strong desire for power and control, will seize anything that has prestige and turn it into an ideological mouthpiece, so making it less prestigious and causing them to move onto something else, as they are doing with universities. It may be that the rise of social media—and the ability to find like-minded people—as well as socioeconomic factors such as too many graduates competing for too few graduate jobs, resulting in them competitively Woke-signaling, is also relevant.

But I don’t think it’s irrelevant that in 2009, the editorship, for the first time, passed to a woman, Mariette DiChristina, and then, in 2020, to another woman, Laura Helmuth, who, by the way, is interested, à la Orwell’s Nineteen Eighty-Four, in “countering mis-information.” Helmuth has also condemned Nobel Laureate and DNA-discoverer James Watson for discussing the facts about race differences in intelligence [James Watson Throws a Fit, by Laura Helmuth, Slate, December 1, 2014].

As I have discussed before, females are on average less interested than males in scientific ideals such as systems and objective truth and they are more interested in empathy, equality, and socially conforming. Hence, these qualities are far more important than understanding science in any new Managing Editor.