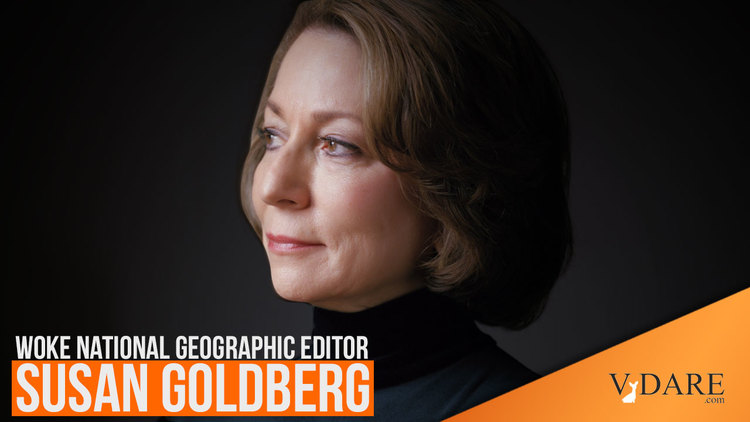 NATIONAL GEOGRAPHIC’s Race-Denying Susan Goldberg Strikes Again: “No One Is Born A Genius"

Sir Isaac Newton is often held up as the archetype of a scientific “genius.” His brilliant originality and extraordinary intelligence fundamentally changed the world of science. But what few people realize is that Newton was emotionally cold and even sadistic—once threatening his mother that he’d burn her house down—mentally unstable and prone to outbursts, fanatically obsessive, and otherworldly to the extent that he’d get lost in thought on the stairs for hours while his guests waited in the next room. There is a large body of evidence that most recognized “geniuses” tend to be like this and that the traits involved are strongly a matter of genetics, as documented in The Genius Famine by Edward Dutton and Bruce Charlton. So, you might be surprised to find that one of America’s leading popular science magazines—National Geographic—is promoting the absurd idea that you can make your child into a “creative genius” by encouraging their “passion” [Bringing out the genius in your child, by Michelle Donahue, National Geographic, March 19, 2021].

Or perhaps you might not be surprised. As I reported in 2019, National Geographic gradually started abandoning science in 2014 when the Wokester Susan Goldberg [Tweet her]was appointed editor-in-chief.  See What Makes NATIONAL GEOGRAPHIC’s Race-Denying Editor Susan Goldberg Run?

I had assumed that things couldn’t get much worse than her dedicating an issue [April 2018] to “debunking” the concept of “race” (that is, “subspecies” that exist in all other animals) and attempting to argue that the native people of Europe were not European because they descended from other “bloodlines” (not “races”). I was wrong.

In the article, the promo for which is illustrated by a mixed-race boy playing the guitar, we are told that “Experts agree that no one is born a genius” [Can I Help My Kid Become A Creative Genius? by Rachel Buchholz, National Geographic, March 21, 2021]. Purportedly genius begins with a “childhood obsession.” This develops over time, and manifests as something highly original if the individual also happens to be “creative.” So parents should support children’s “obsessions” and then, you never know, they might end up becoming geniuses. 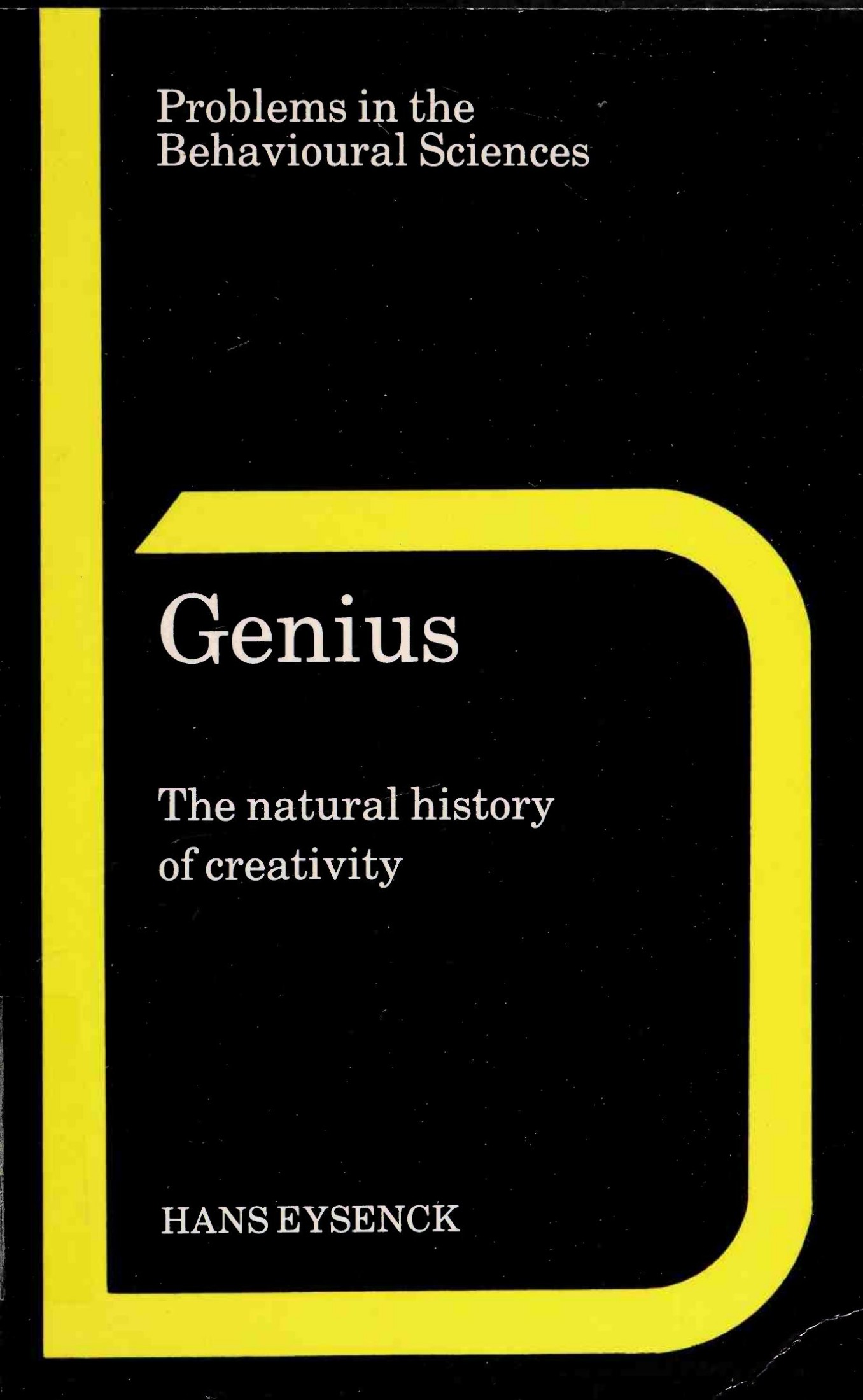 This is wrong on so many levels. As Hans Eysenck showed in his 1995 book Genius: Natural History of Creativity, “obsession” is only an element of genius. Another, and more important, element in scientific or even artistic genius: simply having very high IQ. (This is especially pronounced with scientific geniuses.) In fact, this will tend to be outlier high IQ, with geniuses being far more intelligent than either of their parents. IQ is about 80% genetic—so geniuses will have clever parents—but due to unusual but possible genetic combinations, the “genius” will be much more intelligent.

Then there’s his (and it’s almost always “his”) personality. Here we have yet more extraordinarily unlikely genetic combinations. Usually intelligence goes together with a pro-social personality; high Agreeableness (altruism and empathy) and high Conscientiousness (rule-following and impulse control). But with the genius, which is caused by vanishingly improbable genetic chance, quite the opposite has happened.

The genius is moderately low in Conscientiousness, meaning that he ignores the rules, and, thus, makes very unusual and original connections. And he is moderately low in Agreeableness. Ground-breaking ideas are heresy and will always offend against vested interests and make many people feel uncomfortable. But the genius, being low in altruism, simply doesn’t care.

More importantly, the scientific genius will tend to be rather autistic; low in empathy and, therefore, very high in systematizing; he has the “extreme male brain” highlighted by psychologist Simon Baron-Cohen [The extreme male brain theory of autism, by Simon Baron-Cohen, Trends in Cognitive Sciences, June 2002]. This means that even if he did care, he doesn’t realize that his radical, world-altering discovery will upset people.

Among artistic geniuses, it helps to be seriously mentally ill and even mildly psychopathic. Possibly this is because it causes the genius to be obsessed with power—giving him the drive to be brilliant—and also because you experience depths of “feeling” that you need to get out of your system which normal people just don’t. One analysis found that 17.8% of world-famous scientists are severely psychopathic (partly defined by low Agreeableness and low Conscientiousness), compared to 30.8% of composers, 37.5% of artists, 26% of “Thinkers,” and 46% of writers (novelists, poets and playwrights). This is compared to just 1% of the general population.

Geniuses also seriously tended to be mentally ill. An estimated 33% of the sample of world-famous scientists had suffered from depression or anxiety as had 34% of composers, 36% of “Thinkers,” 41% of artists and a remarkable 72% of writers. Artistic geniuses, furthermore, had very high levels of sexual deviance. In fact, almost none had “normal” sex lives [Creativity and psychopathology, by Felix Post, British Journal of Psychiatry, July 1994]. In that the genetic component to these traits is high, it further suggests that “genius” is overwhelmingly a matter of unlikely genetic combinations.

That said, Post found that there is an environmental element, though it’s unclear how easily this can be disentangled from genetics. Put simply, your child may be more likely to become a genius if you abandon him, die, or otherwise ensure that he has an unhappy childhood.

Post found that having an unhappy childhood—marred the death of a parent or the abandonment of the family by the father, for example—was relatively high among these world-famous creatives. Certainly, 56% of writers, the category with the highest prevalence of psychopathology, had unhappy childhoods, as against 26% of “Thinkers” and, least often, 10% of composers. This may set people up to “live fast, die young,” meaning very high IQ is more likely to be combined with low Agreeableness, poor impulse control, depression and, thus, outstanding creative accomplishment.

Even the assertion that geniuses find their passion when they are very young seems to be wrong, in many cases. According to Dutton and Charlton’s The Genius Famine, there is evidence that geniuses are often late developers who take time to discover what they are really interested in.

Isaac Newton nearly failed his degree, because he hadn’t found his passion yet. Francis Crick was rejected from his first-choice university and took quite a while to get into the issue for which he is famous.

In fact, geniuses, especially in the sciences, tend to become prominent in an area other than the one they have trained in, precisely because they find themselves, and thus their passion, later in life. This is possibly due to their mental instability, meaning they can find it hard to settle on things or know what they really want. Thus run-of-the mill academics train in a subject and pursue it for the rest of their lives, making very minor contributions. But geniuses train in a subject, see how it relates to another subject in a highly original way, and so pursue all kinds of different areas of knowledge, making big and original contributions.

In fact, it is the very Political Correctness of people like Susan Goldberg that suppresses genius. Wokeism preaches that there is nothing more important than not hurting people’s feelings. Even objective truth is less important than this. The genius, being highly original, will always hurt people’s feelings and, to the extent that he’s rather autistic, cannot help doing so, because he is truth-focused.

People like Goldberg help to drive people like this out of academia, destroying the former “genius safe space” and, potentially, suppressing their genius.

Goldberg and National Geographic are the enemy of real geniuses. And it is geniuses that are behind all great art, all great discovery, indeed, civilization itself.