In one of my VDARE.com commentaries on Nicholas Wade’s book A Troublesome Inheritance I gave a mostly-favorable mention to Scientific American blogger Ashutosh Jogalekar:

Scientific American magazine ran, on its blog, a very fair review by chemist Ashutosh Jogalekar [Email him]. In refreshing contrast to the negative reviews, this one appeals to the spirit of keen young researchers in the human sciences:

“If I have a criticism of the book it is that in his efforts to cover extensive ground, Wade sometimes gives short shrift to research on interesting topics like oxytocin and hormonal influences. But what he does make clear is that the research opportunities in the field are definitely exciting, and scientists should not have to tiptoe around these topics for political reasons.”

These are new fields of inquiry! We know very little! Wade is doing a preliminary survey of the territory. Load up the wagon trains—let’s get exploring!

This cool breeze of curiosity and excitement stands out all the more against vituperative defenders of Social Science orthodoxy like Jonathan Marks [“The Genes Made Us Do It | The new pseudoscience of racial difference,” In These Times, May 12, 2014] who sounds, by comparison with Jogalekar, like Grandpa Zeke sputtering about how that Wright Brothers contraption will never fly.

Well, Jogalekar has now been dropped by Scientific American.  His Wade review was not the occasion of the dropping, but it was plainly a contributing factor.

(As I pointed out in my VDARE.com piece, Jogalekar actually did a partial recantation following a shameful, scurrilous attack on his Wade review by Cultural Marxism 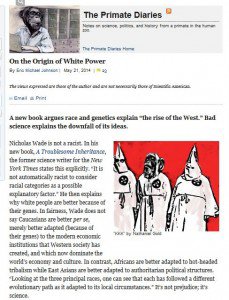 Eric Michael Johnson.  Johnson’s piece was headed up with a picture of three hooded Klansmen.  This, on the Scientific American blog!)

So why was Jogalekar dropped?  Because he was not sufficiently on-message with the CultMarx “all men are rapists” dogma.

The last straw was Jogalekar’s post on Friday about [Richard] Feynman, the Nobel-winning father of quantum electrodynamics. Commenting on recent biographies of Feynman, Jogalekar noted the physicist’s “casual sexism,” including his affairs with two married women, his humiliation of a female student and his delight in documenting his strategies for picking up women in bars. But while expressing disappointment in Feynman’s behavior, Jogalekar essentially dismissed it as a byproduct of the “male-dominated American society in the giddy postwar years.”

Within a day of the column’s appearance, Scientific American pulled it from its site, with another note from Brainard: “The text of this post has been removed because it did not meet Scientific American’s quality standards.” [“What’s going on at Scientific American? Deleted posts, sexism claims, a fired writer,” by Paul Farhi, The Washington Post,  July 16, 2014.]

Apparently an obscurantist, vituperative, and nakedly political attack headed up with a picture of Klansmen does meet the magazine’s quality standards.

When I first got acquainted with Scientific American fifty-odd years ago it offered curious youngsters a window into the world of free empirical enquiry and speculation.  I am very sorry to see that it has now degenerated into just another mouthpiece for social science orthodoxy, as if we needed another one.

And see the power of that orthodoxy!  Defy it at your peril!  It is in itself nothing but lies, wishful thinking, careerism, status striving, and ideological posturing; yet it has its thumbs firmly on the windpipe of Western civilization.

The greatest glory of that civilization has been science, whose standards of detachment from religious and political dogmas Scientific American magazine once, in freer times, championed.

I used to love Scientific American.  I looked forward eagerly to its (not very reliable) appearance in provincial English newsagents’ stores, and saved my pocket money for it.

My devout hope now is that the filthy thing will soon go out of business; that its premises will burn to the ground, its archives be destroyed, its executives be reduced to begging from the passengers in subway trains, and its lesser employees be re-assigned as unpaid interns to the Southern Poverty Law Center, where they can doodle sketches of Klansmen all day long.