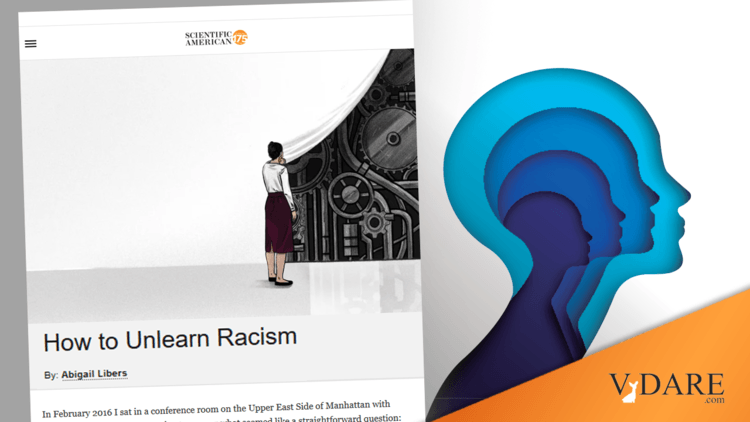 In February 2016 I sat in a conference room on the Upper East Side of Manhattan with about 35 other people attempting to answer what seemed like a straightforward question: What is racism?

I—a white, able-bodied, cis-gendered woman in my 30s—thought that racism was prejudice against an individual because of race or ethnicity. That's why I had signed up for the Undoing Racism Workshop, a two-and-a-half-day antiracist training that analyzes race and power structures in the U.S.: I wanted to gain a better understanding of why some people have so much contempt toward those who are different from them. My yearning for answers came from personal experience with discrimination as a Jewish woman and the daughter of immigrants; my parents fled to the U.S. from the former Soviet Union in 1979. Growing up in a small town in upstate New York followed by an even smaller, more rural town in Georgia, I was picked on and often felt “othered.”

The workshop was hosted by the People's Institute for Survival and Beyond (PISAB), an organization that was founded 40 years ago by community organizers who wanted to create a more equitable society by addressing the root causes of racism. Our leaders—a Black man, a white woman and a Latina woman—called on each of us to share our definitions of racism. People's responses were all over the map, from “a mean-spirited, close-minded way of thinking” to “discrimination based on someone's skin color or ethnic background.” The trainers validated each of our responses before pointing out how varied they were and explaining that few of us had identified racism as a web of institutional power and oppression based on skin color. Not having a simple or agreed-on definition of racism makes it easier to keep racism in place. To undo racism, they said, we need a common language that ties together individual and systemic factors. Hearing racism described as a power hierarchy was eye-opening for me. Having been marginalized myself, I thought I was sensitive toward other groups who faced discrimination. I thought I got it.

It goes on in this vein for some time.

But as many of them were converted to Christianity and the Age of Enlightenment took off in the 1700s, religion lost its legitimizing power.

Instead “science” was used to justify the enslavement of Africans and the genocide of Indigenous peoples, which had already been occurring in British colonies for more than a century. Johann Friedrich Blumenbach, a German anthropologist and comparative anatomist, is known for proposing one of the earliest classifications of the human race, which he wrote about in the late 1700s.

His measurement of skulls from around the world led him to divide humans into five groups, which were later simplified by anthropologists into three categories: Caucasoids, Mongoloids and Negroids. It did not seem to matter that some prominent scientists, including Charles Darwin, dismissed a biological basis for race over the next century.

This would have come as a surprise to the author of On the Origin of Species by Means of Natural Selection, or the Preservation of Favoured Races in the Struggle for Life.

Trainings on implicit bias, diversity and antiracism may be limited in their efficacy in part because they tend to be brief one-off events. Promising research by Devine in 2013 showed that prejudices and biases can be more successfully unlearned through longer-term intervention. The 12-week longitudinal study was based on the premise that implicit bias is like a habit that can be broken through the following steps: becoming aware of implicit bias, developing concern about the effects of that bias and using strategies to reduce bias—specifically, ones that replace biased reactions with responses that reflect one’s nonprejudiced goals. …

For Fleming, who has educated thousands of university students, teaching implicit bias within the context of a comprehensive, three-month course “is far more effective than being dragged into a diversity training for an afternoon,” she says.

Perhaps whites should be sent for long-term anti-racism training to quiet places in the country where they could concentrate on overcoming their bad attitudes. We could call them, say, “camps.”

This realization didn’t hit me until I took PISAB’s workshop for a second time in 2019. I had signed up at the urging of Stoop Nilsson, a social worker and racial reeducation coach who shows white people how to become antiracist leaders in their communities.

Do you ever get the impression that anti-racism training is a new multi-level marketing pyramid scheme?

Back to Scientific American:

Working with Nilsson is helping me create a positive racial identity of my own—as both a white person and a Russian Jew. Our country prides itself on being a melting pot, but much gets lost in the assimilation to whiteness and white supremacy culture. Markers of ethnic identity such as language, food, culture and music are discouraged; those from a non–Western European heritage are often vilified. In my family, my parents were so committed to learning English that they hardly ever spoke Russian around the house. I never learned it. It saddens me that I can’t speak to my own parents in their native language and that I still know so little about our heritage.

I’ve given this lady writer a hard time, so I’ll let her finish the post with a genuinely moving sentence:

Recently my mom became frustrated trying to remember a word in English to describe how she was feeling; I worry that her last words will be in Russian, and I’ll have no idea what they mean.