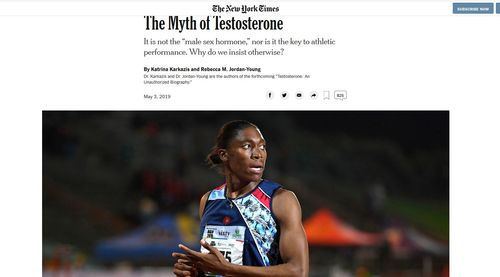 NYT: "The Myth of Testosterone"—A Real Doozy Of HOW WE THINK NOW

From the NY Times opinion page, a real doozy of How We Think Now:

The Myth of Testosterone
It is not the “male sex hormone,” nor is it the key to athletic performance. Why do we insist otherwise?

Katrina Karkazis is a senior visiting fellow at the Global Health Justice Partnership at Yale University. Rebecca M. Jordan-Young is a professor in the Department of Women’s, Gender and Sexuality Studies at Barnard College. They are the authors of the forthcoming “Testosterone: An Unauthorized Biography.”

On Wednesday, the Court of Arbitration for Sport ruled that female athletes with naturally elevated levels of testosterone could not compete as women unless they made efforts to reduce the hormone in their bodies.

The ruling came in a case brought by the middle-distance runner Caster Semenya against the International Association of Athletics Federations that challenged longstanding myths about the presumed masculinity of testosterone and its role in the body.

Semenya is a South African runner with undescended testicles who won the gold medal in the 2016 Olympics women’s 800 meter race. This is not a transgender person who went out of the way to make a mockery of women’s sports but simply a victim of a birth defect. On the other hand, Semenya is built like a Clemson cornerback so it’s hardly fair to force real women to compete with Semenya.

But it’s a symptom of the deconstructionist madness of our times as exemplified in this op-ed that Semenya was allowed to win a women’s gold medal.

Her loss demonstrates just how entrenched those myths have become.

For a century, talk about testosterone as the “male hormone” has woven folklore into science, so that supposedly objective claims seemingly validate cultural beliefs about the structure of masculinity and the “natural” relationship between women and men.

Labeling testosterone the male sex hormone suggests that it is restricted to men and is alien to women’s bodies, and obfuscates the fact that women also produce and require testosterone as part of healthy functioning. Even the earliest hormone researchers understood that testosterone has wide-ranging effects on metabolism, liver function, bones, muscle, skin and the brain in both sexes.

But because early hormone researchers were fixated on sexual anatomy and reproduction, they gave short shrift to testosterone’s myriad effects, treating it as both oddly narrow — that it is about things men have more of — and overwhelmingly powerful.

Of course, it’s one thing for myths to persist in the public imagination. But what has puzzled us in nearly a decade of research is how these ideas have gained so much traction among the organizations that regulate sports, when the evidence needed to support them is largely absent or contradictory.

What every major news outlet has failed to report: the rule for suppressing testosterone doesn’t apply to athletes with XX chromosomes, only XY athletes competing in the women’s category https://t.co/waLCBQMgKp