VDARE.com Editor Peter Brimelow writes: Well, I started writing this on January 5, Twelfth Night, when in much of the Anglosphere Christmas decorations are traditionally taken down, and did at least finish on January 6, “Little Christmas”! A very Happy New Year to all VDARE.com readers.

Who says there’s no War On Christmas? This season Slate reported: South Korea Plans to Put Up a Christmas Tree; North Korea Has Threatened to Bomb It, by Elliot Hannan, December 2 2014. Perhaps significantly, the Communist leadership in North Korea regards this tree, which can be seen from across the border, as that serious a threat. (Christianity is now the largest religion in South Korea).

In fact, 2014 saw several startling examples of the raw Christophobia that drives the War On Christmas. A YouTube video went viral of Lebanese-born Muslim cleric Abu Musaab Wajdi Akkar, a one-time Los Angeles resident, asserting that saying “Merry Christmas” “is worse than fornication and drinking alcohol and killing someone.”

So now you know why you have to say “Happy Holidays”!

This visceral intolerance is notably at odds with our 2012 War Against Christmas competition winner’s report that, on his much-Christmassified anonymous U.S. armed services base in a war zone far, far away

Even Third Country Nationals (TCNs) aka the slaves, the help, the people who do everything else, seem to be happy Christmas is coming. Actually I came in to work, and one of the TCNs who cleans my office’s bathroom smiled at me, waved, and in a thick Indian accent, with head bobbing from side to side, said “Merry Christmas, sir.”

But, for example, majority-Muslim Brunei just banned all public celebrations of Christmas [Brunei Explains Its Christmas Celebration Ban, By Prashanth Parameswaran, The Diplomat, December 31, 2014). (For that matter, there have been attacks on public Christmas displays in Israel). So maybe the War Against Christmas is intensifying world-wide, however much it is Denied in the U.S.

In a story widely noted on the internet, but not in the MSM, Christophobia apparently motivated an Egyptian living in Austria to cut down a village crucifix [Egyptian man cuts down 'eyesore' Jesus on cross, TheLocal.AT, December 24, 2014]. And, in a story that surprisingly did reach the MSM, an airline passenger in New York was removed after “hectoring” the flight crew because he had been wished “Merry Christmas” (Passenger tossed after flipping out over staff’s ‘Merry Christmas’ by Michael Liss, Daniel Prendergast and Philip Messing, New York Post, December 25, 2014). However, there seem to have been no MSM efforts to find out who this passenger was.

The War Against Christmas is one of my personal favorite topics. Reporting on it has got me, at least as of this writing, one of my few mentions in Wikipedia (right up there with Fox’s Bill O’Reilly—wow!) although it misdates my interest, which go back to 1995. More important: daring to discuss what VDARE.com sometimes calls the “Khristmaskampf”  —after the Kulturkampf, Bismarck's drive to eliminate Catholic influence in the German Empire—gets the American Left really mad.

Even madder than they used to get when contemplating Sara Palin. And probably for the same reason: both the resistance to the Khristmaskampf, and also Palin’s wasted but extraordinary moment of popular fame, are in some sense symptomatic of the historic American nation’s inchoate struggle against its progressive dispossession.

I watch Google News alerts on the War Against/On Christmas all year. Very few days go by without some Main Stream Media fool fulminating furiously that

These are obviously the current, absurdly contradictory, talking points issued by whatever took the place of Journolist, the notorious secret ListServ group for Leftist MSM journalists.

In 2012, I noted that the War Against Christmas in the U.S. had gone through eight distinct phases:

But I concluded last year that, not for the first time, I seem to have been early—as I was in 2004, when I predicted the first outbreak of nastiness, which didn’t show up until 2008. Just as on the Western Front a century ago seemed to have established itself.

I think this pattern has been confirmed in 2014.

As in 1914, trench warfare does mean that the enemy (if you identify with the Allies) is in possession of much of the field. You need only glance at the pictures of Cleveland Christmases past in Tom Piatak’s most recent VDARE.com annual survey of the War On Christmas, or read about this 2006 Los Angeles Times editorial, to realize how far the Cultural Marxist Khristmaskampf has gotten.

And the Christophobes are still able to launch successful local offensives which the national MSM now generally will not report. Obviously local bureaucrats all over America have gotten the message.

Additionally, the Christophobes are still able to perpetrate such crass demonstrations of cultural power as Santa Is Caught With His Pants Down in Poo-Pourri's Hilariously Inappropriate Christmas Ad|Even St. Nick has to poop, by Tim Nudd, AdWeek, November 20, 2014. (Try that on Abu Musaab Wajdi Akkar!) This seems to reflect the scatological fixations of “Nitel Night” (Holy Night| The little-known Jewish holiday of Christmas Eve. Seriously, by Benyamin Cohen, Slate, December 23, 2014).

And this line must be drawn by Federal legislation.

Over to you, John Boehner. Heh heh.

But, despite my own strategic gloom. I must say that both of our recent winners express at least tactical optimism. I

In 2013, “Non-PC Airline Employee” wrote of the Christmas-friendly improvements at the Detroit airport hub. In 2014, our old friend Patrick Arsenault (email him) writes:

The tide continues to turn in our favor involving one of the largest corporations in the world. It seems Google's heart may have grown three (or at least 1.5) sizes bigger this Noël in comparison to previous years, and perhaps in response to the massive backlash I discussed with you previously (in articles (in articles published here and here).

Notably, for the first time since their very first Christmas Day "Google Doodle" on December 25, 1999, Google elected NOT to use the greeting "Happy Holidays" on their homepage for the 2014 logo, instead opting to use the still-mealy mouthed but far less overtly controversial or politically divisive "Tis the Season" (which when clicked linked to some Christian sites and images, probably inadvertently).

But that isn't the zinger, the company also did something else I never expected—they actually said "Merry Christmas" in the December 25 messages accompanying the Doodle on their official social media pages (Facebook, Twitter, Google+)... something I explicitly wrote to you about them abstaining from doing before.

It is clear that the company is now very conscious of public opinion about euphemisms at Christmastime, and is starting to address it appropriately. They must have realized how hypocritical it was to place translations of "Merry Christmas" in foreign language sites where Christmas is merely a Western import (Japan, India, China, etc.) while abstaining from using the word in actual English-speaking countries where Christmas is the most revered holiday.

This is a decidedly impactful and far-reaching victory in public recognition of Christmas. See the comparative Google Infographic below—click to enlarge. 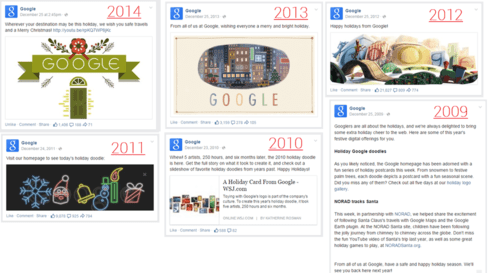 So it seems that articles proclaiming an emerging Conservative victory on the Christmas Wars may be quite accurate, as we are just now beginning to see the most iconic and powerful of American companies start to actually acknowledge the name of the most popular holiday in America after years—if not decades—of refraining.

We still have a long way to go, but I suspect that as what I like to term a "Second-Wave British Invasion" continues to impact American culture, the return of "Christmas" will only accelerate, given Britain's lack of all this "happy holiday" nonsense in their culture at Christmastime. Even Britain's most prominent atheist (Richard Dawkins) bemoans the secular "holiday" Americana that we take as being widespread in the West (which it isn't), even going so far as to say he hates the secular (mostly American in origin) Christmas songs, but loves the Christian religious ones! And on that note I think it's important to add that many non-Christians also participate in the celebration of Christmas as a cultural holiday, bringing the total percentage of Americans claiming to celebrate it to 95% when it might otherwise be more around 75%. This makes it even more obvious that Merry Christmas should not be avoided to avoid offending "non-Christians".

In conclusion I think the outlook is looking good for our most cherished holiday's status in the public sphere, and I look forward to no longer having to see people jump through hoops just to avoid using the word "Christmas" to describe the holiday that is Christmas.