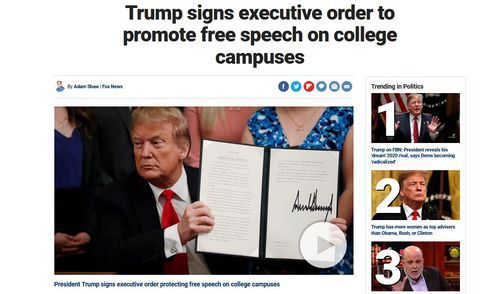 IT’S A MIRACLE! Trump Does Something Good On Campus Insanity, He Just Needs To Enforce It

President Trump signed an executive order Thursday aimed at protecting free speech in higher education, fulfilling a promise he made at CPAC.

"Under the guise of speech codes, safe spaces and trigger warnings, these universities have tried to restrict free thought, impose total conformity and shut down the voices of great young Americans like those here today," Trump said at the signing ceremony. [Trump signs executive order to promote free speech on college campuses, by Adam Shaw, Fox News, March 21, 2019]

The order requires public universities to prove they comply with the First Amendment in order to obtain federal money. Private universities would only be required to uphold the free speech rules they made for themselves. It also instructs 12 grant-making agencies to be extra attentive to free speech violations when it comes to awarding money to colleges.

The order doesn’t create new laws. Public universities are already required by law to comply with the First Amendment and private universities have their own rules on free speech. The difference is that it’s the President of the United States telling these schools, in an official government order, that they risk their government funding if they don’t respect free speech.

This executive order puts more pressure on universities to follow the law and do everything possible to protect free speech. They know the president is watching them and just one big controversy he sees on Fox News could cost them their federal aid.

The anguish from liberal journalists over the measure show the power of the executive order. "Trump’s executive order is part of a broader power play in academia—the right’s decades-long campaign to assert control over what it sees as one of the greatest threats to its political ambitions,” Vox writer Zach Beauchamp concluded in a column lambasting the president’s desire to use the federal government against “universities [conservatives] deem insufficiently friendly to conservatives.” [Trump’s free speech executive order isn’t about free speech, by Zach Beauchamp, Vox, March 21, 2019]

The question is whether Trump will enforce this measure. Trump said in his speech, "Taxpayer dollars should not subsidize anti-First amendment institutions." In order to make good on that pledge, he must take action against gross offenders of free speech. This bill is ultimately toothless if it doesn’t come with some action. Making an example of one prolific offender would do much to fight back against campus insanity.

There is still much that the federal and state governments can do to correct higher education. One easy measure is to strip public universities of “diversity” funding that goes straight to Leftist administrations and their pet causes. Tennessee’s state legislature did this in 2016, yet the withdrawal of diversity funding only lasted one year. [University of Tennessee diversity funding coming back, but no plans on how to spend it, by Rachel Ohm, The Tennessean, May 25, 2017]. A permanent elimination would likely have a positive impact on our schools.

The free speech executive order won’t solve the problem immediately, but it is a good move and sends a strong message to universities. Respect free speech or face the wrath of Trump.

It’s an executive order his early supporters can be proud of.