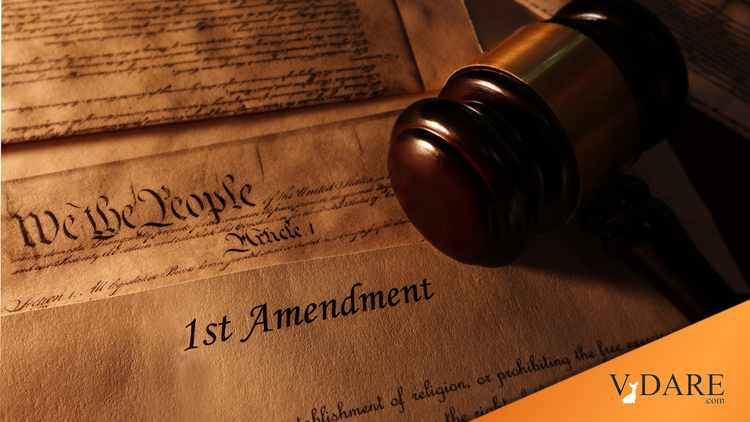 Internet filtering has become a problem for us, because our heterodox opinions, frequently on subjects where any opinion at all can get you in trouble, have led us to be classed by our enemies as "haters." (We are not "haters", and do not advocate or commit anti-immigrant violence, which tends to be committed by the same people who commit violence against non-immigrants.)

However, some people seem to have gotten the impression that we're "Not safe for work."

"[VDARE.com Contributor]: did you look at the site?

"Answer: I called it up at work and up popped this white head, sort of like a Nazi site. I got off right away because I didn't want to get into trouble at work."

That "white head" is picture of a doe (a deer—a female deer.)

There is also the problem that Southern Poverty Law Center insists we're a hate group. The SPLC is best thought of as a fundraising organization; the more "hate" they find, the more money they can raise.

The same goes for George Soros's Media Matters—they make their living finding politically incorrect thought, and they are as likely to find it as a tort lawyer is to find negligence.

As a result, several internet filtering companies have classed us as a "hate site."

Hate means practically anything disapproved of in the 21st century, but perfectly normal in even the second half of the twentieth. For example, Bob Jones University was accused of hate for extreme Protestantism—but Protestantism is sort of supposed to be anti-Catholic. Pope Benedict, on the other hand, was considered hateful for saying that Buddhism was wrong. Again, the Pope is supposed to be in the business of preaching what the Church teaches to be the truth.

And as far as accusations of racism are concerned, I once pointed out that Mahatma Gandhi and Frosty the Snowman have been accused of being racist, along with a surprising number of others.

Internet filtering of "hate" in the workplace is usually part of the corporate desire to avoid any controversy, because of possible bad publicity, and because of a desire to avoid being sued for "Hostile Work Environment" harassment.

H. L. Mencken once defined Puritanism as "The haunting fear that someone, somewhere, may be happy." The crusade against "hate" is a similar strain of Puritanism.

Or reverse Puritanism—a site called Jesus-is-Lord.com, whose owners actually are Puritans (in the same sense that Oliver Cromwell was) was banned by Google, apparently for their anti-abortion stance.

There's nothing that can't be called hate—by someone who hates it. But even if we were guilty of "hate," of course, that wouldn't affect the freedom of speech issue—"hate speech" is as much a Constitutional right as any other speech, as First Amendment expert Eugene Volokh points out. ["Hate Speech", Eugene Volokh, Volokh.com, June 7, 2008]

So as result of corporate and government filtering there are a lot of places in America, that block us. The same as they do in the Arab world.

When we find that a particular company is blocking us, we have a lawyer write them a letter. That usually causes them to back down.

Here's a letter we got from a company that is no longer blocking us. (Name withheld because they were nice about it, and besides, if I mention that they unblocked us, they'll get flak from the other side.)

"I am writing, as …General Counsel, to confirm the decision of my client, [withheld] with regard to its designation of VDARE.com, published by your client VDare Foundation. Initially, please let me remind you that [our client] does not "block" any URL. [Our client] categorizes the various URL's it reviews, and [our client]'s customers make their independent decision how to treat them on the customer's own internet access.

"After review of further research and your explanatory letter, [our client] will, as I stated in our conversation, categorize VDARE.com as 'social opinion'. You may be sure that [our client's] actions were inadvertent and not the result of negligence or malice. With this letter and my client's recategorization of VDARE.com as "social opinion", we consider the matter closed."

Which it is…but there are a lot of censorware companies out there. Here are some of the players in the censorware game:

So it's important for you to contact us with details if you see that we're blocked at your place of work, library or whatever, so we can fight back.

You can usually tell who's doing the filtering because the name of the filter will pop up on your screen. If it doesn't, please send us the exact text of the message, since each message is unique to a particular company. "Access to this web page is restricted at this time", for example, is what you get when you're blocked by Websense.

One of the strangest and most worrisome things about the prevalence of filtering is that it even affects the computers of journalists, who are supposed to be getting the facts, some of which are only available on filtered sites.  It's possible that some facts, even if not exclusive to VDARE.com, will themselves be automatically filtered. (Examples—relative crime rates among races, Martin Luther King's private life,  political associations, and plagiarism, the standard scientific position on differences in IQ.)

One radio host interviewed Steve Sailer on the radio, discussing Sailer's book America's Half Blood Prince: Barack Obama's "Story of Race and Inheritance",  which can be downloaded for free—an easy way for journalists to find out what's in it—or bought in hard copy for a mere $29.95. But the host reported that he couldn't access it from his station's computer!

What will it do to journalism when a MainStream Media writer isn't allowed to know what everyone with an unfiltered internet connection can find out?

Of course, the writer could finish his work at home—but future censorship laws may make content considered hateful unavailable in your own computer in your own home, as is the case in China. The OpenNet Initiative publishes a map of countries like Iran that filter all internet access . America isn't on that map—yet. But there are filtered computers all across the country.

I was discussing this with an IT Professional who supported, for example, the Army's right to censor internet access for the purpose of maintaining good order and discipline:

IT Professional: The military is very much justified in restricting any access in time of war. Some things that you can look at on line will get you killed in other countries our soldiers may be serving in.

Me: You mean you'll be offending Muslims looking over your shoulder?

My feeling is that if Muslims in a war zone are looking over your shoulder, you've got worse problems than internet censorship can solve.

But the rest of us are not in a war zone—we're trying to use the internet for research, and blocking any part of it diminishes its usefulness. Furthermore, the campaign against "hate" on the internet is similar Janet Murguia's attempt to get Lou Dobbs, and all  patriotic immigration reformers,  off the air waves, or David Brock's attempt to silence Sam Francis—an attempt to drive people like both VDARE.COM's writers and our readers out of public life.

What can be done about this situation?

As an individual victim of filtering, there are a number of things you can do to bypass filters. You can read on your personally owned Blackberry, et cetera, or run portable programs from a thumb drive. (If the words "running portable programs from a thumb drive" mean absolutely nothing to you, then you may not be computer literate enough to use this kind of advice. ) If you are computer literate, then see Lifehacker's post Geek to Live: Survive IT lockdown for some ideas. (Some of these are covered in my earlier article.)

If you're in a position of responsibility, owning your own business, head of an IT department, or otherwise in charge of computer policies, you can refuse to use the filters, or at least refuse to let them block political sites.

As a citizen, you can engage in anti-filter activism, doing what you can to prevent these things being required by law.

And finally, of course, because we're on the front line of the filter wars, because we're both fighting against the censors, and being censored by them, you can fight censorware by supporting VDARE.COM.