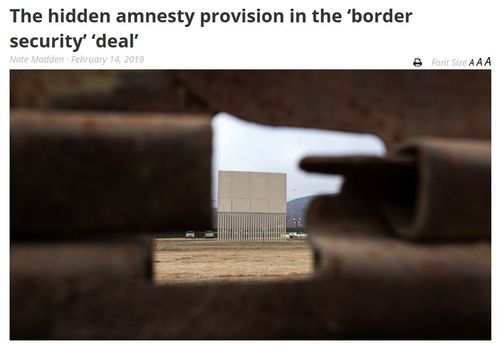 From: A Patriot Lawyer [Email him]

I share VDARE.com’s concerns with yesterday’s legislation, but find some small hope in the text of section 224(a) that no one seems to have noticed:

None of the funds provided by this Act or any other Act, or provided from any accounts in the Treasury of the United States derived by the collection of fees available to the components funded by this Act, may be used by the Secretary of Homeland Security to place in detention, remove, refer for a decision whether to initiate removal proceedings, or initiate removal proceedings against a sponsor, potential sponsor, or member of a household of a sponsor or potential sponsor of an unaccompanied alien child ( as defined in section 462 (g) of the Homeland Security Act of 2002 (6 U.S.C. 279(g))) based on information shared by the Secretary of Health and Human Services.

A good textualist judge would look at the boldfaced language and construe what is being called an “amnesty” by Conservative Review [The hidden amnesty provision in the ‘border security’ ‘deal’, by Nate Madden, February 14, 2019] is really just a prohibition on interdepartmental information sharing. Since DHS has more than enough information from border agents/DACA and DAPA applicants, etc. to start removal proceedings on its own, I can see no reason that removal proceedings against these aliens based on those data couldn’t still occur. (An analogy would be to the prohibition in 13 U.S. Code § 9 on using census information in law enforcement.)

I just wanted to make this feeble butterfly of hope at the bottom of this Pandora’s box better known.