Above,  a Trump supporter from Western Kentucky at the August 29 Evansville IN rally: “The President paying attention to the central United States.“ 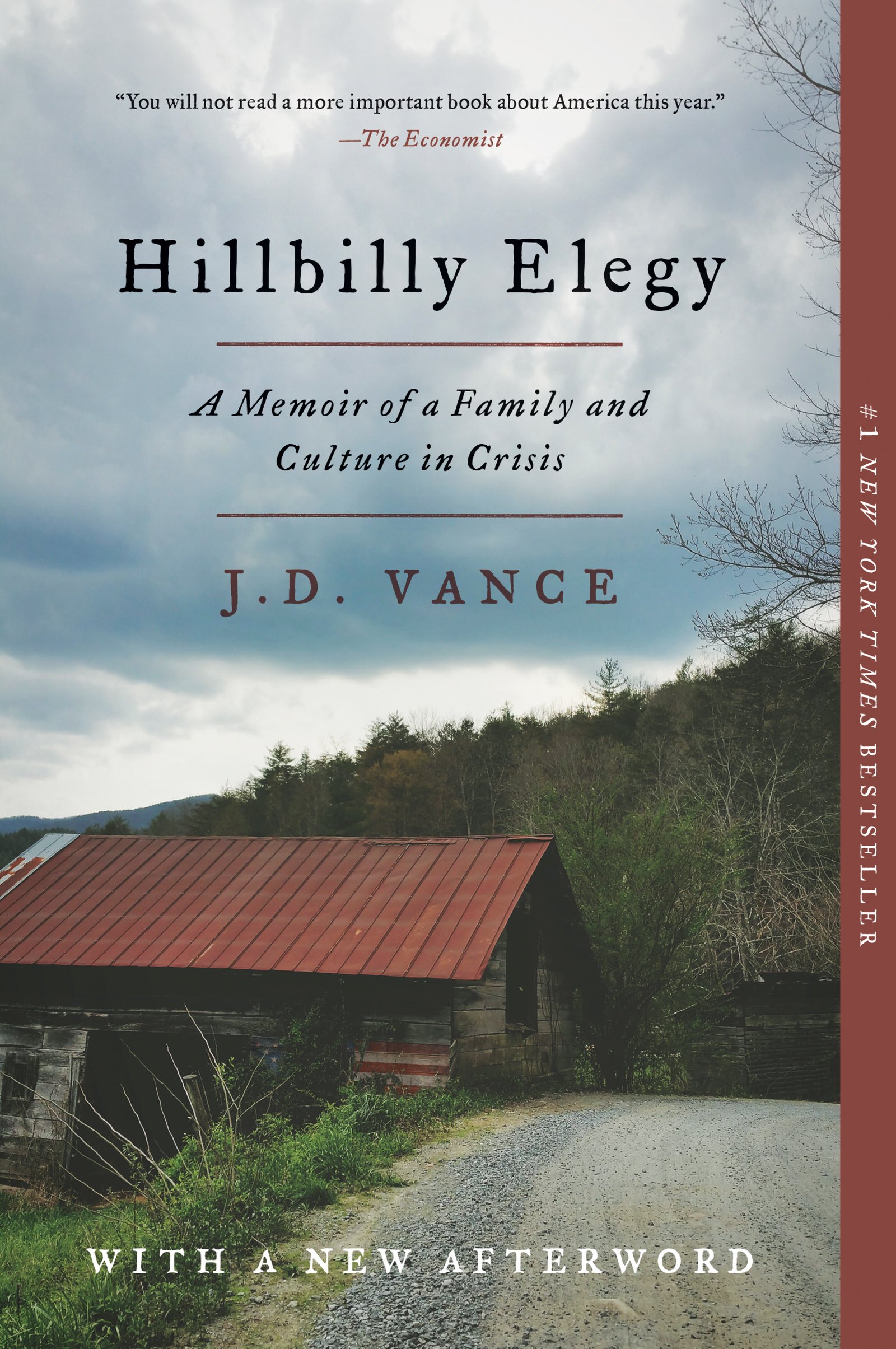 As a clueless press stabbed its way through the darkness during the 2016 presidential campaign trying to suss out why all the yahoos were suddenly so ornery, many pointed to J.D. Vance’s Hillbilly Elegy as a moving and poignant explication of the malignant psychology that had gripped America’s heartland.[Review: In ‘Hillbilly Elegy,’ a Tough Love Analysis of the Poor Who Back Trump, By Jennifer Senior, NYT, August 10, 2016] I come from a similar background to Vance, but for all of his book’s alleged “poignance” and “compassion,” he strikes me more as a traitor and snitch toward hillbillies than an advocate.

I’ve been aware of Hillbilly Elegy since its release, just as I’d been aware of Nancy Isenberg’s White Trash: The 400-Year Untold History of Class in America and The Liberal Redneck Manifesto: Draggin’ Dixie Out of the Dark, which was written by three moronic comedians. All three books were released in 2016, which was 19 years after Simon & Schuster released my book The Redneck Manifesto: How Hillbillies, Hicks, and White Trash Became America’s Scapegoats.

Vance’s chief heresy was to portray Appalachia’s feral hillbillies—those blood-crazed subhuman river rats from Deliverance who’ve served as cultural and cinematic arch-villains for generations now—as human. It should tell you something about how far-gone American cultural discourse is that merely portraying common middle American human beings as human is considered radical. 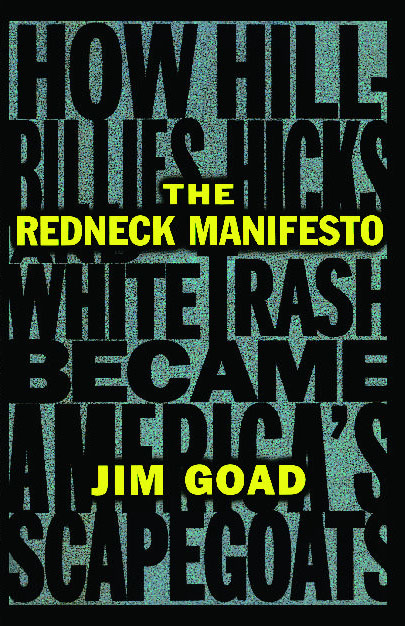 Unfortunately, that’s about as radical as it gets. Although Vance often speaks with fondness of the gun-toting, foul-mouthed, ill-tempered, drug-addled crackers in his grandparents’ home base of Breathitt County, KY, he ends up placing most of their problems squarely at their own bunion-covered feet. Their problems can’t be genetic, he argues, because both he and his sister were able to crawl up from the meth-stained squalor and make something of themselves. Their problems can’t be blamed on the government for reasons he never quite explains beyond suggesting that people who blame the government for any of their problems are dodging the fact that everything is basically their own fault. So although he concedes that the oft-maligned rubes from flyover country are human, he concludes that for the most part, they are bad humans.

By Vance’s own admission his book is a personal memoir and not a scholarly study. It’s a linear tale describing how economic forces drove his family out of Kentucky and into a southern Ohio factory town. Battered both emotionally and mentally by his violent, drug-addicted mother, Vance finds his chief advocate in his “Mamaw”—a fiercely protective and aggressively violent grandmother who preaches hard work, clean living, and knocking the teeth out of anyone who gets in your way.

After a youth mostly spent being shunted from place to place as his mother descended from alcohol to pills to heroin while parading a series of unsuitable male suitors in front of Vance and his sister, he finally found solace by moving in with Mamaw and focusing on his education. Four years in the Marines gave him the structure that was absent in the hollers of Breathitt County, KY and the grey little factory burg of Middletown, OH. He ultimately was accepted into Yale’s law school and married an Indian woman (dot, not feather) named Usha.

The end of the book finds him a lawyer, successful author, and father of a mixed-race baby who lives in a comfortable bourgeois enclave far removed from the chaos and dysfunction of his youth.

Although he gives credit to his Mamaw, he largely seems to take most of the credit himself—he wriggled out of the benighted hill folk’s “learned helplessness” because he had the smarts and the gumption to do it, and, by gum, he’s not a statistical anomaly, he’s an example-setter for all the despicable Oxycontin junkies and welfare leeches who languish in self-inflicted pain far from the nation’s media centers.

I could relate to many things in Vance’s book—mainly, the fuming agony of being raised by a working-class parent who was not only violent, they cared more for intoxicants than for their own spawn. For Vance, both the violence and the addiction were embodied in his mother, as his father was a no-show almost from the start. Although both my parents were violent, my father was the hopeless alcoholic, and I feel the addiction was more systemically damaging to me than the violence was.

Then again, my father was the oldest of four boys in an Appalachian town in Vermont during the Great Depression. His father, who abandoned the family after popping out four kids with my Grammy Goad, was allegedly the town drunk and was fond of blasting off his shotgun inside the house to terrify the kids. I never met my paternal grandfather and couldn’t even tell you his first name, but I was made aware that even before reaching puberty, my dad had to work to help support his mom and three brothers.

And while I was growing up, my father worked two full-time jobs—one as an oil-refinery foreman and one as a freelance plumber—an insane burden which likely contributed to his death at age 59. Dad also drank a full bottle of either Scotch or whisky every day and never spared the rod nor spoiled any of his four kids.

Nature v. nurture is such a sticky subject. Although I’d like to believe in free will and I deeply dread the very idea that we’re all automatons, I partially blame my father and I partially blame his life circumstances. I like to believe that even if you took the cream of New England’s Protestant nobility and raised them in a mountain shack with a father who blasted shotguns to terrify them, forced them to toil endlessly at menial labor before they even kissed a girl, made them fight in the Battle of the Bulge for reasons that were unclear to them, and then set them on a path that had them cleaning toilets and working oil rigs for 80 hours a week every week of their adult life, in most cases they’d be sufficiently shell-shocked to develop some addictions and to occasionally lash out with violence.

Trying to isolate blame on a single cause is a fool’s errand, yet people can’t seem to resist the temptation. In my dad’s case—as in his dad’s case and probably generations of dads before him—I suspect that a combination of personal failings and situational pressures can be blamed.

Yet when Vance takes a bleak look at the rotten-toothed, opiate-addled, food-stamp-slinging people who apparently didn’t have the smarts or character to lift themselves out of their environment like he did, he can’t seem to bring himself to blame anyone but the hillbillies. Rising addiction and suicide rates among this population, along with its unprecedented drop in longevity rates, is solely framed as a moral failing—it can’t possibly be pinned on the fact that politicians sold all the middle- and working-class jobs overseas and imported millions of hostile nonwhite proles to snap up the remaining low-paying jobs.

All the despair he observes is blamed on some vague spiritual sickness rather than on material realities. His diagnosis is no less scolding or condescending than Barack Obama’s finger-wagging about rural losers who bitterly cling to guns and Bibles.

Although he self-identifies as a conservative, Vance sends little moralistic smoke signals throughout the book that indicate he’s entirely under the thrall of liberal thought-policing. He repeatedly refers to racism, sexism, and homophobia as if they were leprosy. He speaks of Barack Obama with a reverence that is so squirrelly, it borders on Chris Matthews’s infamous line about a thrill going up his leg. He suggests that rural Americans who distrust a media who openly hate and defame rural Americans are simply paranoid and uneducated.

And this, I suspect, is why so many have found his book to be palatable—he unquestioningly parrots all the reigning pieties spewed out by the coastal elites whose policies have eviscerated rural America.

I recently caught a glimpse of Vance on CNN complaining that Donald Trump doesn't offer any real solutions to what ails America’s poor white underclass.

But to my knowledge, Trump is the only major presidential contender in memory to even address outsourcing as a major factor in rural America’s pathologies.

Trump is also the only one who even bothers to mention the opioid crisis. Trump’s brand of economic nationalism seems like a far more pragmatic solution to rural poverty than Vance’s exasperatingly vague admonition of “Don't be a bad person.”

And for all that Vance is presumed to speak for the anguished rural hordes of southern Ohio and Kentucky, the hillbillies seem to prefer Trump’s solutions.

In 2016, his grandparents’ breeding ground of Breathitt County, KY gave 62.5% of their votes to Trump. Middletown, OH, where Vance spent most of his youth, straddles two counties—one of those counties went for 61% for Trump and the other went 65% for Trump.

Vance is obviously writing what a lot of people want to hear, but it doesn’t seem to be what the hillbillies themselves want to hear. Part of this may be blamed on the fact that a lot of them are hopeless fuckups who refuse to take any personal responsibility, but part of it can also be blamed on the fact that they aren’t as dumb as they seem and are at least wise enough to perceive that the federal government views them as an obstacle rather than a constituency.

Jim Goad [Email him] was a redneck long before it was cool.