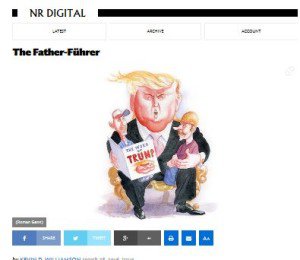 My old National Review colleague Kevin Williamson [Email him] has been frightening the horses with a piece he posted at the National Review website the other day. It's a subscription website; you have to pay a quarter to read the article. I gritted my teeth and paid.

Kevin's theme is white trash. They're complaining, he says. They think their jobs were stolen by immigrants or shipped abroad by rapacious capitalists. They think they should be able to go on living in the place where they grew up, even after the jobs have left. They nurse "poorly informed and sentimental ideas about what those old Rust Belt factory jobs actually paid." They cherish "the concept of the nation as an extended family"—and that's a European concept, not an American one, according to Kevin.

And look at what's happening to their lives, says Kevin, wandering over into Charles Murray territory. Their families have disintegrated. Divorce, drug addiction, suicide … Here we get to the politics:

It is easy to imagine a generation of young men being raised without fathers and looking out the window like a kid in an after-school special, waiting for Daddy to come home … Some of them end up grown men still staring out that window, waiting for the father-führer figure they have spent their lives imagining, the protector and vindicator who will protect them, provide for them, and set things in order.

Shall I pause for a nanosecond while you figure out who Kevin has in mind as the father-führer figure?

R-i-ight. These are Trump voters!

It's all just victimology, says Kevin. Quote: "Nobody did this to them. They failed themselves." Another longish quote:

This article of Kevin's generated a lot of outraged criticism, some of it fair, some not.

Among the fair criticism: people saying that Kevin would never write so scathingly about poor blacks; and, if he did, National Review would not publish it. Both things are true. [Right: A 2010 NR cover story by Williamson  called Keeping Blacks Poor  which blames liberal policy initiatives for black poverty, and a book called What Doomed Detroit, answer: more liberal policy initiatives. ] 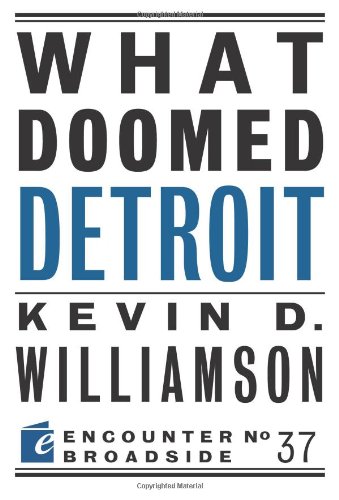 See, Kevin? I can say these things on VDARE.com, but you can't. Eat your heart out, pal.

I know Kevin fairly well. My rather strong impression is that he's a race realist, in an intuitive sort of way. I mean, he has no math or science, and understands nothing about the quantitative study of human nature; but at some level, he knows the score.

He is, though, young and ambitious. He can't take the kind of risks that a geezer like me, at the other end of life, can cheerfully take. He knows what happened to Jason Richwine, and he's not going to let it happen to him.

Further, he wants to cut a figure. Last week, you'll remember, I said there are really four political parties in the U.S.A. today:

Each party has its own dedicated commentariat. Well, Kevin wants to position himself as the Bad Boy of the Donorist-Capitalist-Neocon commentariat, the one who says out loud what others merely think.

I said there were some unfair reactions to Kevin's article. Mostly people picked on him for saying that economically derelict white trash communities deserve to die. This, said the critics, is sheer Tim-Wise-ery. Die, white trash!

Come on, guys, let's have a little respect for the meaning of words. Kevin said the communities should die. What he wishes for the people is that they should rent U-Hauls and get out of there.

My biggest problem with Kevin's piece is his glib conflating of Trump voters with the white underclass. Meth-addled white underclass types with chaotic lives don't vote, Kevin. Even if they did, there's nothing like enough of them to give Trump the numbers he's been getting. Trump voters, as I said up above, are mainly working- and middle-class suburban types—like me, and my next-door neighbors here on Long Island.

Just on those grounds, I'm going to call nonsense on Kevin's piece.

The white underclass are the aborigines of the post-industrial age. It's absurd for Kevin Williamson to tell them to get a U-Haul and move out of their dying communities. They'll just be underclass whites somewhere else, with lives just as empty. There is no solution for them, any more than there is for Eskimos or aborigines, other than the one they've found in drink, drugs, and despair. The smart, capable, and energetic ones will escape and get lives, as always happens; the rest will sink into squalor.

Charles Murray, who wrote about the problems of the white underclass in his 2012 book Coming Apart, is more honest about this than is Kevin Williamson. Last July, I reviewed three social science books in a column for VDARE: one of them was Murray's Coming Apart, another was Robert Putnam's Our Kids: The American Dream in Crisis. I linked to a televised debate between Murray and Putnam, where Murray says this (click here to go to 43:24):

Bob has already referred to my take-away from all this with the ways in which we really need a civic Great Awakening. However, I've got to say that the fact is, civic Great Awakenings have about as much chance of transforming what's going on as a full implementation of Bob's "purple" programs does.

The parsimonious way to extrapolate the trends that Bob describes so beautifully in the book is to predict an America permanently segregated into social classes that no longer share the common bonds that once made this country so exceptional; and the destruction of the national civic culture that Bob and I both cherish. I hope for a better outcome: I do not expect it.

The American dream in crisis? A discussion with Robert Putnam and Charles Murray, Streamed live on Jun 22, 2015

And if you think that's the bad news, talk to an AI alarmist—one of those people, I mean, and the category includes some very smart people indeed, like Elon Musk and Steven Hawking—one of those people who think that Artificial Intelligence will advance to a point where all of us, our entire species, is the aborigines, our culture superseded by one much more advanced, Homo sapiens shuffled off into reservations to drink ourselves to death.

Yesterday, the Eskimos and Apaches; today, the white underclass; tomorrow perhaps you and me. Who knows?

Like Charles Murray, I hope for a better outcome, but I do not expect it.

VDARE.com Editor Peter Brimelow writes: I’m reluctant to interfere with Derb in his full We Are Doomed mode, but the official VDARE.com position is that tightening the labor market through an immigration moratorium must improve wages and job prospects for all American workers—including, on the margin, the underclass.