WSJ’s Bill McGurn Says “Baltimore Is Not About Race” But Welfare—Then Why Isn’t Kentucky Burning? 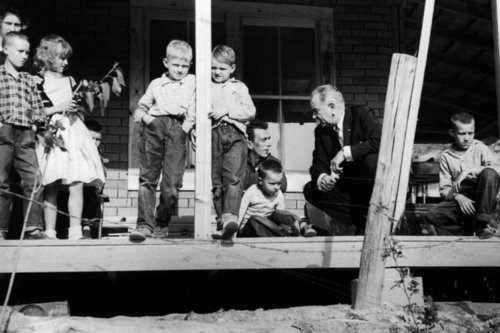 Yet another conservative ascribes Baltimore’s problems to liberalism. This time, it’s the normally sensible Bill McGurn, writing in The Wall Street Journal.

“Baltimore Is Not About Race,” his main headline claims, with a subhead that reads thusly: “Government-induced dependency is the problem — and it’s one with a long history.” It’s illustrated with the picture, above, of LBJ bringing the Great Society to rural Kentucky.

As I conceded in my post about John Perazzo’s claims in Front Page, no one with any sense doubts that the socialism Democrats have imposed upon major cities has harmed the people who live in them. No one doubts that left-wing educational schemes aren’t much good, either.

And here, McGurn is right. Socialism is bad:

[T]he disaster of inner cities isn’t primarily about race at all. It’s about the consequences of 50 years of progressive misrule—which on race has proved an equal-opportunity failure.

Baltimore is but the latest liberal-blue city where government has failed to do the one thing it ought—i.e., put the cops on the side of the vulnerable and law-abiding—while pursuing “solutions” that in practice enfeeble families and social institutions and local economies.

These supposed solutions do this by substituting federal transfers for fathers and families. They do it by favoring community organizing and government projects over private investment. And they do it by propping up failing public-school systems that operate as jobs programs for the teachers unions instead of centers of learning.

If our inner-city African-American communities suffer disproportionately from crippling social pathologies that make upward mobility difficult—and they do—it is in large part because they have disproportionately been on the receiving end of this five-decade-long progressive experiment in government beneficence.

How do we know? Because when we look at a slice of white America that was showered with the same Great Society good intentions—Appalachia—we find the same dysfunctions: greater dependency, more single-parent families and the absence of the good, private-sector jobs that only a growing economy can create.

Remember, in the mid-1960s when President Johnson put a face on America’s “war on poverty,” he didn’t do it from an urban ghetto. He did it from the front porch of a shack in eastern Kentucky’s Martin County, where a white family of 10 eked out a subsistence living on an income of $400 a year.

Mr. Cheves quotes a former grade-school principal who says this of Martin County’s children: “Instead of talking about a future of work, or a profession, they talk about getting a check.”

McGurn’s point is correct. The government created a culture of dependency among blacks and Appalachian whites. Great Society welfare programs harmed the incentive to work among black men, and very likely fed the plague of fatherless black children. Daniel Patrick Moynihan wrote about the collapse of the black family 50 years ago. And those programs have done the same to Appalachian whites.

But those whites, with just as much reason to be unhappy as blacks, didn't riot and burn down small towns or fire the hills. They didn’t kill sheriff’s deputies or burn down their neighbor’s businesses. Isn’t it likely that a few times in the past 15 years, a sheriff’s deputy in some small town unjustly shot and killed a white Appalachian teenager? Did the whites riot and loot and burn? Maybe we didn’t hear about it.