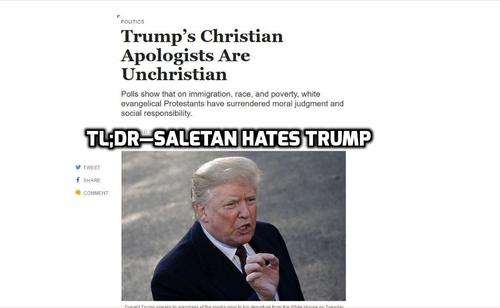 A recent fiery column by William Saletan [Email him]was headed Trump’s Christian Apologists Are Unchristian/  Polls show that on immigration, race, and poverty, white Evangelical Protestants have surrendered moral judgment and social responsibility [November 25, 2018]. I must say that, as an Evangelical Christian myself, Slate and Saletan (who, although he doesn’t say so, is Jewish) are not my first authorities on Christian doctrine. 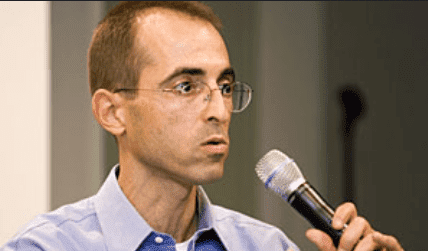 But Slate and Saletan (right) are influential, so I guess the argument has to be dealt with: it’s Leftist Fake News.

The MSM generally disdains Evangelical Christians, and Christianity in general, but it’s quick to pontificate on what defines a true Christian. Guess what? It coincides with what Leftists want anyway!

Saletan uses Wheaton College’s Ed Stetzer [Tweet him] a prominent Trump-bashing Evangelical, to say things that he actually wants to say himself:

Ed Stetzer is grappling with a moral crisis. Stetzer, the director of the Billy Graham Center at Wheaton College, is preaching the Gospel to his fellow Christians. And they’re not listening. “White Evangelicals are highly motivated to support President Donald Trump around the issue of immigration,” Stetzer, a Trump critic, wrote in Vox on the morning of the midterms.  [Links in Saletan’s text are in the original throughout.]

Note also the arrogance, even blasphemy. Saletan says that Stetzer (right) is “preaching the Gospel.” But the Gospel, wrote St. Paul in I Corinthians 15, is the death, burial and resurrection of Jesus Christ. In contrast, the “Gospel” Saletan promotes is The Gospel of Trump-Bashing.

Not the same. I think I’ll take St. Paul over St. Saletan on this one.

The next day, after reading exit polls, Stetzer lamented that the president’s scare talk about migrants had proved once again to be a winner with white Evangelicals. “I’d hoped it wouldn’t be,” Stetzer told NPR. “But it was.”

NPR, eh? So one day Stetzer is holding forth on Vox, the next day on NPR. Any Leftist venue will do to bash his fellow Christians!

Saletan/Stetzer lashes out at those Wicked Evangelical Trumpsters:

Stetzer and other Evangelical leaders are in the business of saving souls. But today, the souls in peril are in their own flock. Nationalism, tribalism, and a corrupt, ruthless Republican president are reviving old demons and summoning new ones. The “family values” concerns of 10, 20, or 30 years ago—homosexuality, premarital sex, women in the military—have been overtaken by a different set of moral issues, often derided by the right as “social justice.” On these emerging issues, white Evangelical Protestants—for simplicity’s sake, I’ll call them WEPs—are, more than any other religious constituency, standing on the wrong side. The problem isn’t that they’re imposing their morality on others. The problem is that what they’re imposing isn’t morality. It’s wickedness.

Saletan hastens to add that all white Evangelicals aren’t wicked—just the ones who disagree with him and Ed Stetzer.

Indeed, William Saletan has been ecumenically hobnobbing with the “Faith Angle Forum, a project of the Ethics and Public Policy Center”—

At a conference last week, I sat with them as we studied surveys of religious voters. Stetzer is right to worry. The numbers are bad

“Bad”? Saletan means the overwhelming support for Trump among white Evangelical Protestants, a group he refers to as “WEPs”:

WEPs are one of Trump’s most loyal constituencies. Eighty-one percent of them voted for him in 2016. That’s 20 percentage points higher than Trump’s vote share among any other religious group. It’s higher than the percentage of WEPs who voted for George W. Bush, John McCain, or Mitt Romney. The wide gap between WEPs and other faith communities in support for Trump persists to this day. Every other group, on balance, views Trump unfavorably. WEPs, by a ratio of 2 to 1, view him favorably.

(So only 81% of White Evangelicals voted for Trump? There’s room for improvement!)

Many Americans reject Trump because of his meanness, his misogyny, his ethnic demagoguery, and his squalid and abusive personal behavior.

But most WEPs don’t. In a September poll for the Public Religion Research Institute, two-thirds of white Catholics and white mainline Protestants agreed that Trump had “damaged the dignity of the presidency.” Most WEPs said he hadn’t.

In an earlier age it might have been worthwhile to evince concern over “the dignity of the presidency”. But frankly, after Bill Clinton, George W. Bush and Barack Obama, there’s not a lot of dignity left to damage.

Now what should concern us is using the office of the presidency to rescue the country. At this point in time, Trump, with all his rough edges, is the man who might have a shot at that.

Affairs and financial irregularities? Where has the Mainstream Media been since Bill and Hillary Clinton burst onto the national scene two and a half decades ago? Why no investigation of the Clinton Foundation?

To accommodate Trump, white Evangelicals have retreated from moral judgment of him.

Speaking for myself only, I don’t excuse or justify any wrong thing Trump has done. But voting for president is not the same as voting for a spiritual leader. I voted for Trump because I thought he might do something about the National Question. I hope I won’t be disappointed.

So what does he mean by “social responsibility”? Guess:

Compared with other whites, they’re more resistant to federal spending on poor people.

And, says Saletan, a poll presented respondents with 12 traits and issues, asking them to rate them in the order of importance in selecting a candidate. Shockingly, “ability to help those in need” was #12 among Evangelicals.

In fact, White Evangelical Protestants are very generous people. They donate from their own resources to the poor, and Evangelical churches and aid organizations are at the forefront of helping the poor, of all races, around the world.

It’s not “charity.” And Evangelicals are right to recognize the difference.

Saletan accuses “WEPs” of being “reluctant to acknowledge racism”. The evidence: White Evangelical Protestants’ opinions on the police and blacks; and being disturbed or not disturbed “by comments President Trump has made about minorities.”

Trump’s connection with WEPs on racial issues goes deeper than indifference. It’s based on shared identity.

It’s just that in the case of Trump and White Evangelicals, it’s suddenly sinister.

At this point, Saletan trots out another Evangelical Trump-basher, “Christian essayist Michael Gerson”. (Calling Gerson an “essayist” makes him sound more reflective, but Gerson, a former Bush speechwriter, has always been a house-broken “conservative” for Open Borders.)

In the words of Christian essayist Michael Gerson, Evangelicals have degenerated into an “anxious minority,” defining themselves as “an interest group in need of protection and preferences.” Stetzer, based on his analysis of survey data, finds that race and ethnicity, not faith, are driving much of this process.

(Couldn’t every social, racial, ethnic or religious group be defined as “an interest group”? Why is that bad for Evangelicals?}

Many white Evangelicals see their religion not as a universal calling but as a heritage that sets them apart.

They fear people of other creeds, colors, and languages.

“Creeds”? Well, if a Christian believes in Christianity, he can’t subscribe to another religion. That’s not fear, it’s straight thinking. But where is Saletan getting the “colors” and “languages” part?

Well, if you read a little farther, what scandalizes Saletan is the major topic discussed here at VDARE.COM: immigration.

The biggest gap between pro-Trump Evangelicals and other Evangelicals, when they were pressed to name the most important voting issue, was on immigration. That issue was more important to Trump supporters in the BGC survey, and it’s a big winner for Trump among WEPs in other polls. “White Evangelicals overwhelmingly back more hardline positions on immigration, with three-fourths wanting a reduction in legal immigration,” Stetzer reports.

Sounds great to me!

In the Pew Research Center’s 2014 Religious Landscape Study, non-Evangelical Republicans and Republican leaners said, by a margin of 35 percentage points, that “a growing population of immigrants” was “a change for the worse,” not for the better. Among Republicans who identified themselves as Evangelical or born-again, the margin rose to 48 points. In a survey taken after the 2016 election, 50 percent of white Evangelicals, compared with 33 percent of white non-Evangelicals, agreed that “immigrants hurt the economy.” The 2018 PRRI survey asked whether “the growing number of newcomers from other countries … strengthens American society” or “threatens traditional American customs and values.” Only one religious group said the newcomers were a threat. You guessed it: WEPs.

So White Evangelical Protestants are commendably solid on the issue. Too bad some elitist Evangelicals are sabotaging the grassroots to curry favor with the MSM.

were more likely than white Catholics or white mainline Protestants to worry about Islamic violence in the United States.

So we shouldn’t be concerned “about Islamic violence in the United States”?

Most WEPs, unlike members of other religious groups, said they believed that among U.S. Muslims, there was a great deal or a fair amount of support for extremism.

And most WEPs supported Trump’s travel ban. More evidence of their wickedness.

Then there’s the big enchilada—DEMOGRAPHICS.

Most White Evangelical Protestants are bad, says Saletan/Stetzer, because they aren’t on board with the demographic transformation being forced on America. A 2018 poll asked :

Do you think the likely impact of this coming demographic change will be mostly positive or mostly negative?

…most white Catholics and most white mainline Protestants said the change would be positive. Most WEPs said it would be negative.

Stetzer faced the bitter truth: “It is hard not to conclude that far too many white Evangelicals are motivated by racial anxiety and xenophobia.”

So, Saletan tells us, the Christian right “has betrayed Christianity.” And, he informs us,

Jerry Falwell Jr., Robert Jeffress, Franklin Graham, and others who stand with Trump in these fights should no longer be taken seriously as spokesmen for a faith. They’re purveyors of evil.

There you have it. Slate’s Saletan, along with his cherry-picked Evangelical mouthpieces, thinks that Evangelicals who vote for Trump are practicing “wickedness” and Evangelical leaders are “purveyors of evil”.

I say this to my fellow practitioners of “wickedness” and “purveyors of evil”:

Don’t let people like Saletan guilt-trip you into voting against your own interests and those of the American people.

As an Evangelical, I think it’s just great that 81% of Evangelicals voted for Trump in 2016.

Now we just need to get the president to do what he pledged to do.