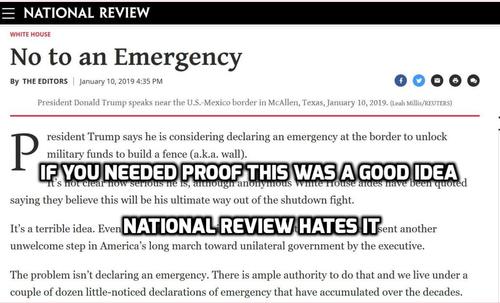 In the long run, history will validate Donald Trump's stand on a border wall to defend the sovereignty and security of the United States.

Why? Because mass migration from the global South, not climate change, is the real existential crisis of the West.

The American people know this, and even the elites sense it.

Think not? Well, check out the leading liberal newspapers Thursday.

The Washington Post and The New York Times each had two front-page stories about the president's battle with Nancy Pelosi and Chuck Schumer on funding the border wall.

Inside the first section, the Post had more stories, including one describing walls in history from China's Great Wall to the Berlin Wall to the Israeli West Bank wall to the wall separating Hungary from Serbia.

Inside the Times was a story on a new anti-immigration party, Vox, surging in Andalusia in Spain, and a story about African migrants being welcomed in Malta after being denied entry into Europe.

Another Times story related how the new president of Brazil, Jair Bolsonaro, has pulled out of a U.N. pact on migration, declaring, "Brazil has a sovereign right to decide whether or not it accepts immigrants."

Half the columns on the op-ed pages of the papers dealt with Trump, immigration and the wall. And there was nothing significant in either on the Democrats' hot new issue, a Green New Deal.

Consider. In 1992, this writer's presidential campaign had to fight to have inserted in the GOP platform a call for "structures" on the border.

Now, the whole Western world is worried about its borders as issues of immigration and identity convulse almost every country.

Looking ahead, does anyone think Americans in 2030 are going to be more concerned about the border between North Korea and South Korea, or Turkey and Syria, or Kuwait and Iraq, or Russia and Ukraine, than about the 2,000-mile border between the U.S. and Mexico?

Does anyone think Pelosi's position that a wall is immoral will not be regarded as absurd?

America's southern border is eventually going to be militarized and defended or the United States, as we have known it, is going to cease to exist. And Americans will not go gentle into that good night.

Whatever one may think of the face-off Tuesday with "Chuck and Nancy," Trump's portrait of an unsustainable border crisis is dead on: "In the last two years, ICE officers made 266,000 arrests of aliens with criminal records, including those charged or convicted of 100,000 assaults, 30,000 sex crimes and 4,000 violent killings."

The Democrats routine retort, that native-born Americans have a higher crime rate, will not suffice as new atrocities, like those Trump related, are reported and repeated before November 2020.

What should Trump do now? Act. He cannot lose this battle with Pelosi without demoralizing his people and imperiling his presidency.

Since FDR, we have had presidential government. And when U.S. presidents have been decisive activists, history has rewarded their actions.

Lincoln suspended habeas corpus. On taking office, FDR declared a bank holiday. When Britain was barely hanging on in World War II, he swapped 50 destroyers for British bases. He ordered U.S. ships to chase down German submarines and lied about it. Truman fired General MacArthur.

Reagan fired the striking air controllers and ordered the military to occupy Grenada to stop Marxist thugs who had taken over in a coup from taking 500 U.S. medical students hostage.

Critics raged: Reagan had no right to invade. But the American people rewarded Reagan with a 49-state landslide.

Trump should declare a national emergency, shift funds out of the Pentagon, build his wall, open the government and charge Democrats with finding excuses not to secure our border because they have a demographic and ideological interest in changing the face of the nation.

For the larger the share of the U.S. population that requires welfare, the greater the need for more social workers, and the more voters there will be to vote to further grow the liberal welfare state.

The Democratic Party is hostile to white men, because the smaller the share of the U.S. population that white men become, the sooner that Democrats inherit the national estate.

The only way to greater "diversity," the golden calf of the Democratic Party, is to increase the number of women, African-Americans, Asians and Hispanics, and thereby reduce the number of white men.

The decisive issues on which Trump was elected were not the old Republican litany of tax cuts, conservative judges and increased defense spending.

They were securing the borders, extricating America from foolish wars, eliminating trade deficits with NAFTA nations, the EU and China, making allies pay their fair share of the common defense, resurrecting our manufacturing base, and getting along with Russia.