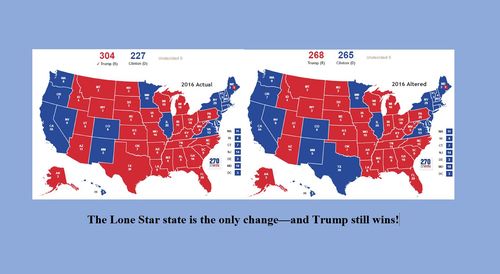 Trading Texas for New Germania—Even If Trump Had Lost Texas, He'd Still Win The Electoral College Via The Midwest

As Ted Cruz fights for his political life in Texas—and the day the state flips reliably blue at the presidential level draws nearer--it's worth noting that even had he lost Texas, Trump would've had a plurality of the electoral college: 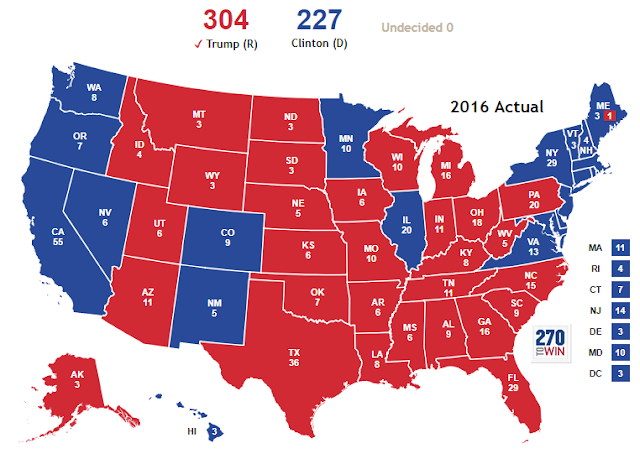 I'm fond of saying he would've won even without Texas. In actuality, that's not a foregone conclusion. The rogue electoral votes in blue states probably would've gone with Clinton if it meant anything more than virtue-signaling. And if not, throwing the election to the House—even under Republican control—would not have guaranteed a Trump presidency. The compromise candidate was ready!

On the other hand, if Evan McMullin hadn't played spoiler in Minnesota, Trump could've won there and thus indisputably won the presidency.

That's the lesson to draw here. If the GOP is able to pick up the upper Midwest, excepting Illinois, it can afford to lose Texas, which it is going to do short of Operation Wetback 2.0 beginning yesterday. If that doesn't happen, there won't be another Republican president, ever.

There should be a Trumpian 2018 mid-term map highlighting the congressional districts and senate seats where Trump Republicans--with non-Trumpian Republicans conspicuously excluded—are on the ballot in November. Trump should be utilizing his direct access to tens of millions of voters to push said map on a regular basis from now through November.

Nothing like that is happening, though, because Trump is a transitional figure rather than a truly transformational one. He has widened the political Overton Window and he has provided a template for electoral success, but it's clear he is not going to be much involved in actually putting the political infrastructure in place to ensure Trumpism outlives Trump.

There are people doing so of their own initiative, however. Kris Kobach, Brian Kemp, and Rick DeSantis were outspent and out-endorsed by the party establishments of their states. Without money but with the Trumpian message, they won their primaries and are modestly favored to win their respective governors' races.

The old guard isn't going to voluntarily adopt to the new reality nor willingly step aside to allow it to occur. Their chamber of commerce money, their desire for perpetual war, and their favorable major media treatment is simply going to have to be overwhelmed and overcome at the electoral level.