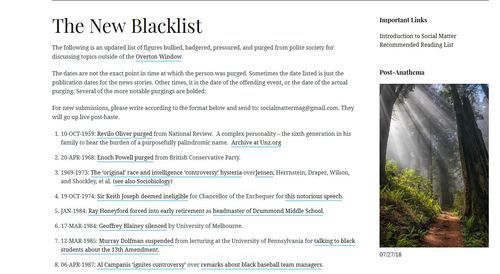 Anonymous blogger Handle's Haus did a list of people purged for thought-crimes, starting with a guy purged by National Review in the 50s, and ending with James Damore on August 10, 2017.

John Derbyshire said of it in January, 2014, that

Finding oneself among distinguished company is always balm to the ego, even when the “among” consists only of seeing your name with theirs in some list.

So there I was, blushing with pleasure at seeing my name on the list of “Bullied and Badgered, Pressured and Purged” at the Handle’s Haus blog.

Yes, there I am, along with E.O. Wilson, Sam Francis, Ann Coulter, James Watson, Pat Buchanan, Ron Unz, and other people I like and admire. Ah, fame!—or at least proximity to it.

Sadly, since my own formal journalistic career started here at this publication, I have never had the opportunity to fired for the kind of thing National Review won't publish. I'm pretty sure I could have got fired for my blog post Unarmed Black Teens Kill More People Than Cholera.

Social Matter has taken up the gauntlet, with a new list based on the now-apparently-defunct Handle's Haus one:

The following is an updated list of figures bullied, badgered, pressured, and purged from polite society for discussing topics outside of the Overton Window.

The dates are not the exact point in time at which the person was purged. Sometimes the date listed is just the publication dates for the news stories. Other times, it is the date of the offending event, or the date of the actual purging. Several of the more notable purgings are bolded.

For new submissions, please write according to the format below and send to: socialmattermag@gmail.com. They will go up live post-haste.[More]

Here's a baker's dozen of victims from the list, that are either about us or our friends, or were based on our coverage:

If you want to contribute to the list, go here, and email socialmattermag@gmail.com.. If you're looking for inspiration, try our "White Guy Loses His Job" tag.