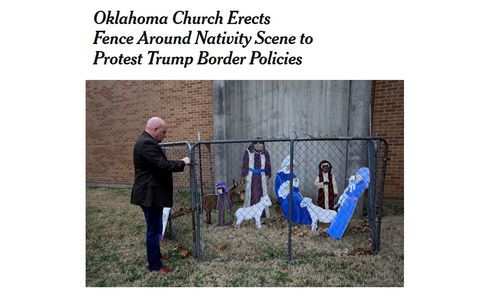 It's Christmastime, so that means it's time for open border fanatics to make outrageous declarations to guilt trip Americans into supporting open borders.

Luis Gutierrez,  Representative of the 4th District of Illinois, and with an F- rating from Numbers USA, has in the past openly declared that "I have only one loyalty and that's to the immigrant community."  By his own admission he's not loyal to his own district in particular nor to Americans in general but "to the immigrant community."  Thanks for getting that straight, Luis, so we know where you stand.

More recently, on December 20th, at a hearing of the House Judiciary Committee, Gutierrez, as part of a rant against Homeland Security Secretary Kirstjen Nielsen in which he called her a liar,  brought the Christmas story into it by proclaiming that the U.S.-Mexico border wall would have killed Baby Jesus two thousand years ago.  Yeah, that's what he said.

You can watch the video here.  The part I'm quoting below begins at the 1:53 mark:

...it is repugnant to me and astonishing to me that during Christmas - we call 'em the holiday seasons to be inclusive , but during Christmas, cuz  the majority always wants to JUST call it Christmas - that during Christmas, a time in which we celebrate the birth of Jesus Christ—a Jesus Christ who had to flee for his life with Mary and Joseph. Thank God there wasn’t a wall that stopped him from seeking refuge in Egypt. Thank God that wall wasn’t there. And thank God there wasn’t an administration like this or he would have too have  perished on the 28th, on the Day of Innocents when Herod ordered the murder of every child under two years of age.   Maybe I haven't gone a lot to Bible school but I know that part. Thank God.  Shame on everybody that separates children and allows them to stay at the other side of the border fearing death,fearing hunger,fearing sickness.  Shame on us for wearing our badge of Christianity during  Christmas and allow the secretary to come here and lie. Thank you.

Then Secretary Nielsen starts talking but Gutierrez just gets up (3:35) and leaves.

An historical note: At the time of the Christ's birth, both Israel and Egypt were in the Roman Empire, so when Jesus, Mary and Joseph fled from Israel to Egypt (Matthew 2:13,14) they weren't, by today's standards, crossing an international border.

Gutierrez is is retiring from the House of Representatives, so that may be his last rant in Congress, although I don't doubt that in the future Gutierrez will be ranting somewhere else.

Another  example is from my home state of Oklahoma, where a local church politicized a nativity scene to make an open borders statement. This story even made the New York Times, which I suppose pleased the church's virtue signallers greatly.  From the Times:

The nativity scene at Fellowship Congregational Church in Tulsa, Okla., looks a little different this year: There is a chain-link fence surrounding Mary, Joseph and the baby Jesus.  The display has been up since the beginning of December, but it drew news coverage this week after the church changed the message on its marquee to read, “The holy family was a migrant family,” and posted photos of the nativity on Facebook. The scene is both an acknowledgment that the Christmas story is a migration story, and also a response to the Trump administration’s efforts to discourage people from seeking refuge in the United States, the Rev. Chris Moore, the church’s lead pastor, said in an interview on Thursday [December 20th].
Oklahoma Church Erects Fence Around Nativity Scene To Protest Trump Border Policies
by Christina Caron, The New York Times, December 21, 2018

Amazingly, the church's pastor Chris Moore actually said that "I do think the church has a very important role to play in the political life.  It's the partisanship that I don't want to be involved in."  Huh?

Last month, members of the church traveled to the U.S. border, where they sang and prayed in front of "a detention camp for migrant children".

They could have spent the same amount of money and gone to help at an orphanage or something, without the pious virtue signalling.  But where's the fun in that?

Of course, this is not the only church engaged in such grandstanding.

Fellowship Congregational Church has not been alone in protesting immigration policy under the Trump administration. Progressive churches elsewhere in the country have used their nativity scenes to make similar political statements this year.

Yes, making political statements.  So is that the real meaning of Christmas?

At St. Susanna Parish in Dedham, Mass., a statue of the baby Jesus was placed in a cage and displayed this month. The three wise men could be seen gazing at him, separated by a tall barrier.  In that display, Jesus represented the children being separated from their parents at the border, the parish’s pastor, Father Stephen Josoma, told CBS News, and the wise men represented migrants stuck behind a border wall.

The previous year, that church was politicizing another issue in their nativity scene.

And, in the city of Indianapolis a church was ahead of the game, putting up a nativity scene in July.

“I know what the Bible said,” the Rev. Stephen Carlsen, dean and rector of Christ Church Cathedral, told USA Today  at the time. “We’re supposed to love our neighbors as ourselves.”

How about your American neighbors who can't make ends meet?  How about your fellow Americans who get attacked and killed by illegal aliens? When do they get included in a nativity scene?

Don't be misled by open borders activists who use the church and Christmas to guilt trip people and promote their agenda.  Don't let them ruin the holiday.