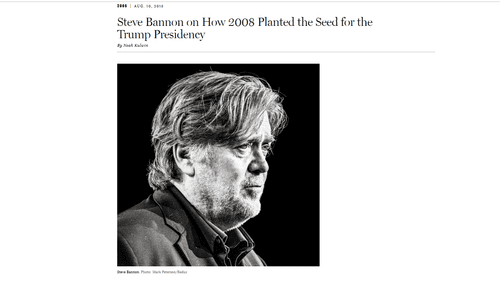 Bannon On The Age Of Milken: How Wall Street Inadvertently Created Populism

From New York Magazine, an interview with Steve Bannon:

A decade now after the 2008 financial crisis, the cultural and psychological imprint that it left looks almost as deep as the one that followed the Great Depression. Its legacy includes a new radical politics on both the left and the right; epidemics of opioid abuse, suicides, and low birthrates; and widespread resentment, racial and gendered and otherwise, by those who felt especially left behind. This week, New York continues our retrospective on the crash and its aftermath by publishing interviews with some of those who were closest to the events. Here, Steve Bannon, a former Goldman Sachs investment banker turned face of Trump-era populism, on how the bailouts led directly to the 2016 election, why we need to break up the banks, and his goal to turn the GOP into a worker-based party.

Bannon: … And by the way, this was completely brought on by the elites of the country and Wall Street. When I got to Harvard Business School in 1983, a bunch of professors were coming up with a radical idea that’s had a horrible negative consequence on this country and to the fabric of our society: the maximization of shareholder value; this was preached as High Church theology. The whole thing of the financialization of Wall Street, of looking at people as pure commodities and of outsourcing and globalization, came from the business schools and the financial community that had these radical ideas, and nobody kept them in check.

The idea had been around among B-school intellectuals for awhile — it was big at UCLA MBA school when I got there in 1980 — but financier Mike Milken put it into practice, feeding back to the B-schools.

Go back and look at the postwar period. These companies had profit margins, and they traded on Wall Street, but there wasn’t this maniacal focus on the financialization. Companies forgot about the social fabric, forgot about your workers. Everything became commoditized. That led to the financial crisis of 2008. It all came home to roost. …

There’s a direct correlation between the factories that left, the billets and jobs that left with them, and the opioid crisis. This is what the Democrats miss: Tariffs are more than economics, it’s about dignity and self-worth.

… Here’s the concept of right-wing populism. If the ’80s and the way we got in this debacle was this radical idea of maximization of shareholder value, here’s what right-wing populism stands for. It’s very simple concept. We’re going to maximize the value of citizenship. We’re going to maximize citizenship value. If you’re an American citizen, you get a special deal. I don’t care if you’re Jewish, Muslim, Hindu, black, white, red, pink, green. I do not care. If you’re an American citizen, you get a better deal.

Here’s how many H-1B visas I want: none. Until we get Baltimore, Detroit, and St. Louis with, you know, youth unemployment down to zero, and people making high value-added jobs, I don’t need any foreigners. And I’m not a racist. What I want is our citizens to get the jobs. Right now illegal immigration is used as nothing more than a scam to suppress workers’ wages.

All the economic textbooks you’ve got before 2008? Throw them out. They’re totally irrelevant.

The state capitalism of the big technology companies has taken away your digital, your data sovereignty. They’ve totally taken it away. You generate intellectual property all day long, and they don’t pay you for it. They take it for free, they monetize at huge margins.

Q. But what right-wing populism does is break that. You agree with that?

Bannon: There are parts of it that are not exclusive to right-wing populism —
But on the left, your problem is that identity politics is stronger than your populism, and that’s why you can’t lift out of it. You can’t be a populist and buy into the globalist system — and the globalist system is open borders. It’s the Kochs. It’s Wall Street. The Kochs are the biggest open-borders guys in the world. The libertarian Cato Institute, look how radical they are. Cato hates my guts much more than the left.

In 2013, I sit there with Jeff Sessions at the Breitbart Embassy, and we’re looking at the 2012 election. A lawyer named Sean Trende did a three-part analysis of the working class on RealClearPolitics. About how the working class did not come out to vote for Romney. And I told Sessions, I said, “That’s the path to victory right there.”