The Second Civil War took a step closer with the shooting of Congressman Steve Scalise. We’ve already seen threats, terrorist attacks, assassination dry-runs, riots, sedition, and treason since the election of Donald J. Trump, as the Left has moved into a revolutionary mode. But the thing to really watch: violent resistance to immigration enforcement.

“Peaceful protesters” will serve as the cover of this effort, in the same way they enabled violent Antifa and Black Bloc activists during the Milo riots in Berkeley. Police did not intervene in that case for fear of harming the “peaceful protesters.” 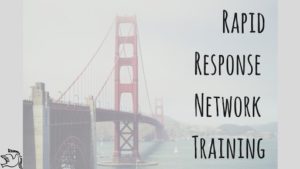 Similarly, leftists are planning for teams of protesters to confront Immigration and Customs Enforcement (ICE) Enforcement and Removal Operations (ERO) officers attempting to enforce the law. They will provide cover for activists to attack officers. Indeed, the only reason such “response teams” of protesters would even exist is to deliberately create a dangerous situation.

Such groups are openly organizing as we speak:

Become part of a team of committed people ready to respond and be present during any ICE raids of homes and workplaces. This training will provide information on how to: [Practicing Solidarity During Immigration Raids in San Francisco: Rapid Response Network Training, Archdiocese of San Francisco & the Ignatian Spiritual Life Center, February 9, 2017] 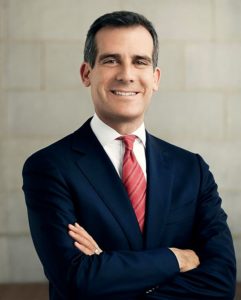 In classic Big Lie style, Eric Garcetti [Email him]  Mayor of the sanctuary city of Los Angeles, pins the blame for forthcoming violence on the Trump Administration. He claims federal government simply should not be allowed to enforce the law in the City of Treason:

Mayor Eric Garcetti says he is worried that arrests of immigrants by federal authorities could trigger riots in Los Angeles and put police officers in danger.

In an interview last week with the radio show Latino USA about President Trump’s immigration policies, Garcetti said relations between the Los Angeles Police Department and the community have improved in the last few decades.

But that trust is tested when U.S. Immigration and Customs Enforcement agents portray themselves as police officers or are mistaken for police when making arrests, the mayor said.

In a particularly dishonest and cowardly way, Garcetti makes sure he doesn’t make the threat directly. Instead, he simply makes it clear illegal aliens are planning to violently resist—but that that the fault will lie with those making the arrests, not those violently resisting arrest.

Of course, a real American loyal to this country would conclude the presence of an entire alien population which feels justified in resisting the laws through violence means we should start deporting people right away, before the situation gets any worse. But instead, Garcetti gives the wink and nod to upcoming riots. He moans:

“If something goes wrong, I fear a tinderbox out there. Where people will suddenly say ‘no’ and try to defend, keep that person from being taken,”

Garcetti even gives the public some crocodile tears for the soon to be murdered ICE Deportation Officers.

Indeed, Garcetti makes it clear he wants no arrests of any illegal aliens.

George Kivork, the mayor’s spokesman, said Saturday that the mayor’s focus is on strengthening trust between LAPD officers and the community, including immigrants.

“Those long-standing partnerships are based on the idea that no one should be targeted because of immigration status — and it is a vital part of keeping our families, friends, and neighborhoods safe,” Kivork said.

With his hyperconcern for the criminal “community,” one is tempted to say Garcetti probably got into office because of the illegal votes of those who shouldn’t be in the country in the first place.

Garcetti is challenging the constitutional order.  He is saying that the federal government has no authority over immigration in the City of Los Angeles.  Garcetti, an attorney who must know better, is challenging Supreme Court decisions, such as U.S. v. Arizona, which reaffirmed that the federal government is supreme in the area of immigration.  Indeed, only a few years ago when states began desperately trying to defend themselves against illegal immigration, this is the exact position the Left was arguing for.

President Trump should meet Mayor Garcetti’s challenge. The Chief Executive should begin a campaign in the Greater Los Angeles area to enforce immigration laws, not just against criminal aliens, but against the million or so illegals there.

Trump can prepare the battlefield by ordering the Internal Revenue Service (IRS) and Social Security Administration (SSA) to provide the Department of Homeland Security (DHS) with all records relating to suspected illegal aliens. These would include the unlawful use of Taxpayer Identification Numbers (TIN) by an employee, the use of a TIN to pay income taxes, the use of a TIN in payroll deductions, the use of unissued Social Security Numbers (SSN) (such as the widely used number 000-00-0000), the use of stolen SSNs, and the identity of employers who receive “no-match” letters for incorrect SSNs used in reporting Social Security wage information and tax withholdings. 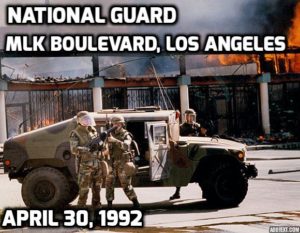 And since ICE is short-handed, redeploy available U.S. Border Patrol resources to the Los Angeles Basin. With the significant decline in illegal immigration over the border with Mexico, a large number of Border Patrol Agents (BPA) can be sent on temporary assignment to Los Angeles, perhaps 500 to 1,000, as was done during the Rodney King Riots [As Los Angeles Burned, the Border Patrol Swooped In, by Shereen Marisol Meraji, KQED, April 28, 2017].  Indeed, Garcetti is quoted as referencing the 1992 riots in the Los Angeles Times article above , but neglects to mention it was a massive show of force by U.S. Marines, USBP, and other Federal Agents which restored order. 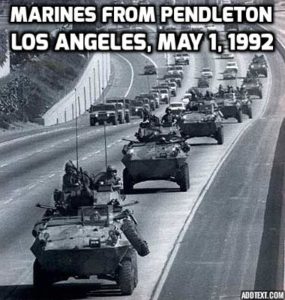 The bottom line: the U.S. must determine for good and all whether Los Angeles is part of the country or not. If the mayor of this rebellious metropolis can’t or won’t stop people who shouldn’t even be in the country from rioting, then President Trump needs to make an example of him. Massive raids and other enforcement action by DHS will show Garcetti who is boss, that the Constitution remains the law of the land, and the federal government supreme in the area of immigration.

The Border Patrol and the Marines had to occupy Los Angeles in the past. They can do it again if necessary.