Fed Failure: What That Attack On Betsy DeVos Says About Civil War II

VDARE.com’s James Fulford recently noted that the new Secretary of Education, Betsy DeVos, had to have her security detail augmented by the U.S. Marshals Service as a result of an attack by thugs from the teachers unions, cheered on by the Washington Post.[ Betsy DeVos being guarded by U.S. Marshals Service, By Danielle Douglas-Gabriel and Emma Brown, Washington Post, February 17, 2017] But the recent attack on DeVos was more significant than most have realized.  The American political order is breaking down, and the blood in the streets will be real.

Some background:  After 9/11, provision of protective details for cabinet officers and other heads of government agencies was all the rage.  Generally, there had not been a protective detail unless there was a real threat.  Usually it was just for prestige and the ability to move through traffic with lights and sirens.

Even during the 1970s, in the heyday of domestic and international terrorism, few cabinet officials had protection, and the usually only on dangerous international trips.  Even during the Iraq War I, then-Secretary of State James Baker had only a driver and one or two agents protecting him domestically.  Now the Secretary of State has a full-time detail of uniformed officers and Special Agents from the Diplomatic Security Service in the United States, and dozens of agents protecting him on overseas trips.

Usually, most Cabinet officers are protected by Special Agents from their respective Offices of Inspector General (OIG), with the exception of the Secretaries of Defense, Homeland Security, and Attorney General.  For example, the Secretary of Health and Human Services (HHS) has a full detail of HHS OIG agents from headquarters and the field during any travel.

Obviously this is no longer judged sufficient: hence her protection had to be increased by using United States Deputy Marshals.

Key points about the attack:

Of course, most minor Cabinet officials face no real threats.  Few people want to kill the HHS Secretary or the Secretary of Commerce. The DOD, Attorney General, or DHS Secretaries, maybe—but the Education Secretary?  Unlikely, until the election of Donald J. Trump and the consequent Leftist tantrum. Apparently the head of the protective detail at DOE had not paid attention to Democrat Party rhetoric that says it’s OK to punch Nazis, and all whites and Republicans are Nazis.  And by punch, they mean assassinate. Note the photo of the beginning of the planned assault on DeVos: 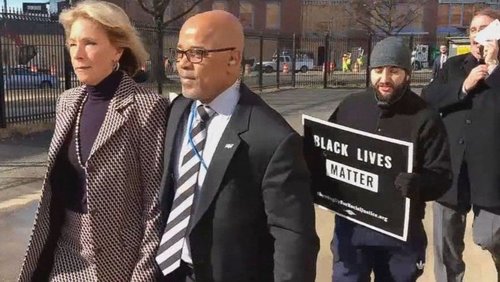 In a major blunder, the attackers are within arms distance and no other member of the protective detail has moved to intercept the attackers.  [Protesters block Betsy DeVos from entering DC public school, By Ralph Ellis, CNN, February 10, 2017]

As a veteran of the protective business, I cannot describe what a complete failure this incident was. It is fortunate that the attackers were not armed and ready to attack, as their rhetoric advocates.

A professional Federal law enforcement officer, trained in protective action, would not be walking away but running away—and other members of the protective detail would have moved to intercept the attacker, who they did not know was armed or not.  At this point, at least one of the detail should have drawn a weapon and most likely have shot the terrorist with the Black Lives Matter sign.

To compound the failure—the by-now-obvious probing of Secretary DeVos' protective detail—the attackers then blocked her escape by placing themselves in front of her vehicle, even grabbing on to the fender. (Note: this video is not consecutive).

The driver of the "package,” as the protective vehicle is known, should have immediately accelerated out of what is called the "kill zone."  It is a well-known tactic for professional terrorists and assassins to use co-conspirators or third-party cut-outs to interfere with protective details, including using protesters to block vehi cles in the protective convoy.

In fact, specialists in protection, such as Secret Service and DSS to be trained and instructed to run over anyone blocking the vehicles in the protective convoy.

Needless to say, the Lying Press is implying that the attack was justified because DeVos is "controversial"—

One of the protesters who blocked the secretary appeared to have touched her, according to a video circulated by Fox5DC. D.C. police arrested one person for assaulting a police officer.

The incident was a sign that DeVos entered office as a deeply polarizing figure after winning confirmation only by the slimmest of margins.

Worse yet, the U.S. Attorney's Office for the District of Washington has not yet charged the terrorist who led the practice with assaulting a Cabinet Officer (Title 18 United States Code Section 351)—likely because President Trump did not fire all the Obama U.S. Attorneys.

And the Democratic Party, in the person of Arne Duncan, former Secretary of the Department of Education, is attacking the effort by the U.S. Government to protect DeVos:

One former official said the agency's security detail has protected multiple secretaries and are "top-notch security professionals." Duncan said he "never for one second doubted" the security team's ability to do their jobs, and he never saw a need to ask for additional protection.

"That's a waste of taxpayer money," Duncan said of the use of U.S. marshals [sic].

So, basically, top Democrats like Duncan, are decrying protecting DeVos from escalated attacks by Democrat constituents.  Protecting Republicans to them is a waste of money. Of course, if the “professionals” were “top-notch,” they would not have to call in the U.S. Marshals Service.

And the arrested attacker turns out to be a homosexual Muslim “refugee”—the perfect Democrat constituent:

A gay man who fled Afghanistan with his family in 1990 out of fear of persecution and death from the Taliban was among several protesters arrested on Feb. 10 for attempting to block U.S. Secretary of Education Betsy DeVos from entering a D.C. middle school.

Bilal A. Askaryar, 32, has been charged with assaulting a police officer and failing to obey a lawful command of an officer during a protest outside Jefferson Middle School Academy in Southwest Washington. Police said about 50 protesters confronted DeVos as she entered and left the school in a government car.

This tells us that the Democrats plan to not only elect a new people, but use homosexuals, Muslims, and immigrants as the violent vanguard of their terrorist revolution.

The warning of Enoch Powell is timely: "As I look ahead, I am filled with foreboding; like the Roman, I seem to see 'the River Tiber foaming with much blood."