The Real Predators on Campus Come From The Third World

The Left is defined by its canards, from “Islam is a religion of peace” to “Russia hacked the election.” (Maybe it’s not the GOP which is the Stupid Party after all.) But there’s one big lie the Left seemingly prizes above all others. “One in four American women will be raped while in college.” And this lie is used to justify a crackdown on “rape culture” pinned on Americans, when the real problem on campus is immigrants.

Even leftist media outlets admit these statistics are intentionally misleading. [Why the New ‘One in Four’ Campus Rape Statistic Is Misleading, by Lizzie Crocker, Daily Beast, September 21, 2015] Besides making no distinction between sexual assault, rape, and sexual misconduct, one oft-cited study actually showed that only eleven percent of the 150,000 female undergraduates who were studied in 2015 admitted to experiencing anything close to the criminal definitions of rape, sodomy, or aggravated assault.

That same year, a whopping eighty-nine percent of all colleges reported that ZERO rapes occurred on their campuses [Study: 89% of colleges reported zero campus rapes in 2015, by Patrick deHahn, USA Today, May 11, 2017]. In short, the feminist trope of a “rape culture” in the West is nothing more than a fantasy used for gross political gains.

Of course, the fact that so many feminists support the importation of a real rape culture (see: Islam) has not gone unnoticed. The same perpetually aggrieved individuals stayed noticeably silent during the New Year’s Eve assaults in 2016 involving well over two thousand North African and Arab migrants harassing, assaulting, and raping German women in Cologne and other cities. The young blue hairs are similarly quiet about the staggering rape statistics in Sweden and South Africa.

Why? Because in large parts these crimes involve non-whites targeting whites, not blonde frat boys going after minority pre-meds. Indeed, when rapes or sexual assaults do happen on campus, many of the criminals conform to the trends that we see in Europe, South Africa, and beyond.

On May 3, 2017, Armann Karim Premjee, a 20-year-old Indian national originally from Mumbai, received several charges stemming from the April 1 rape of a 19-year-old University of Southern California student. According to police, Premjee, also a USC student, used a drug or drugs to temporarily incapacitate his victim. From there, while in the victim’s dorm room, Premjee allegedly raped the girl with a foreign object. [USC student, 20, charged with drugging and raping a 19-year-old woman in her dorm room, by Keith Griffith, Daily Mail, May 3, 2017] [UPDATE: Premjee was cleared by video evidence of consent—the complainant was not drugged, but had a normal alcohol-induced loss of memory. See Security video outside nightclub clears USC student of rape, August 4, 2017] 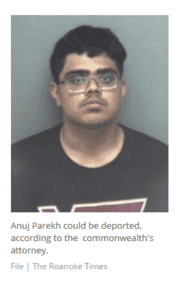 Anuj Parekh, another native of Mumbai, earned the attention of police in Blacksburg, Virginia after several people reported a “peeping Tom” in the area. The Virginia Tech student was arrested and charged with two counts of voyeurism and one count of burglary with intent to commit a misdemeanor after detectives found that Parekh had drilled several holes into a wall in order to spy on and record his neighbors [Blacksburg peeping Tom case: Holes drilled in apartment wall, according to warrant, by Jacob Demmit, The Roanoke Times, April 6, 2016] 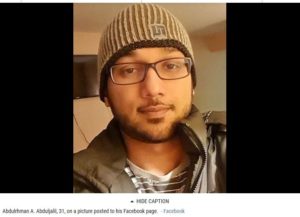 The problem is not only confined to college campuses, either. Saudi national Abdulrham A. Abduljalil, 31, allegedly raped two young children in Weymouth, Massachusetts. [Saudi college student accused of raping Weymouth children, by Kerriann Kelleher, The Patriot Ledger, August 25, 2016]. It is believed that Abdujalil, a student at Southern New Hampshire University, began targeting the two children, both of whom are under the age of ten, after occasionally staying with their family.

All these cases share obvious similarities: a foreign national, usually someone from a Muslim-majority country where sexual violence is tolerated, goes to the U.S.  or Europe and commits unspeakable acts against women or children. One must ask the question: why are such students in there in the first place? After all, if on-campus feminists really care about stopping a “rape culture,” then they would be on the frontline against importing more foreign students, especially those from places like Pakistan, Saudi Arabia, and India.

Unfortunately, the allure of money and foreign funding is too hard for American colleges to ignore. Thanks to healthy, multi-million grants from Communist China, more Chinese students are currently studying in U.S. universities then every before. Most schools welcome these students with open arms because they represent a giant pool of new tuition payers. Despite their vaunted academic reputation though, a 2015 report by WholeRen Education found that American colleges expelled eight thousand Chinese students in a three year period. [U.S. Colleges Expelled As Many As 8,000 Chinese Students In 3 Years, by Max Kutner, Newsweek, May 29, 2015]. Most got the boot for failing grades and cheating.

Saudi Arabia and India similarly send millions of dollars to Islamic studies programs and engineering programs in the U.S., although the money and the number of Saudi and Indian students are both on the decline thanks to fears over President Trump [Exodus of Saudi students from US over ‘austerity, Islamophobia, The New Arab, December 18, 2016].

American college campuses today are essentially playgrounds for far-Left agitators, anti-White elitists, and subsidized international students. Just as abroad, if there is a “rape culture” on campus, it is largely being created because of the importation of Third Worlders. And these globalist enclaves are not doing anything to help the United States. Indeed, by churning out a generation of parasites, they are making things worse.

To stop the actual “rape culture” which exists in the West, we need to stop immigration. But we also need to break the academic cabal and dramatically restructure American higher education. American should no longer tolerate universities which constantly demand foreign money and more foreign students likely to overstay their visas. It’s time to put America First and protect our students, not just at the border, but on campus.