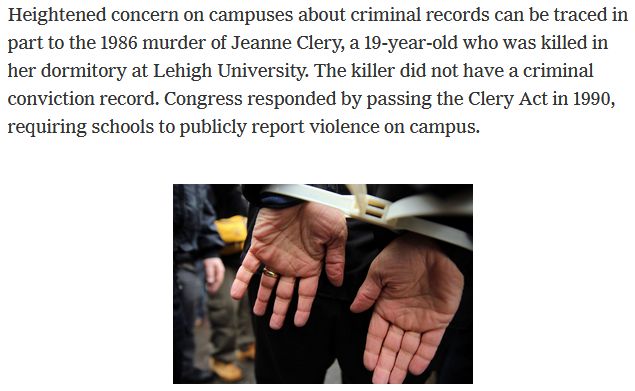 There are two things you need to know about the NYT's editorial trying to get ex-convicts into college without the college administration being notified.[College Applications and Criminal Records, March 14, 2015—see Steve Sailer's post below.]

The first is that it's illustrated with a stock photo of white hands, above. At a guess, I'd say that arrestee is a stupid Occupy Wall Street kid being arrested a demonstration—he already has a college degree.

The second thing you need to know is a fact about the Clery Act, that they reference:

Heightened concern on campuses about criminal records can be traced in part to the 1986 murder of Jeanne Clery, a 19-year-old who was killed in her dormitory at Lehigh University. The killer did not have a criminal conviction record. Congress responded by passing the Clery Act in 1990, requiring schools to publicly report violence on campus.

The Clery Act was passed after Jeanne Clery, 19, was  tortured, raped, and murdered in her Lehigh University dormitory room by fellow-student  Josoph Henry, who was black.

Henry, a sophomore at Lehigh, was angry he had just lost the Black Student Union election. He was failing out of Lehigh for a second time and was mired in a drug addiction.

Henry was found guilty on several counts including: first-degree murder, rape, involuntary deviant sexual intercourse, indecent and aggravated assault and burglary in 1987. He was sentenced to death.

For years Henry fought the sentence with new counsel, who alleged Henry was insane and received incompetent counsel during his original trial. His execution was stayed several times as the courts decided on the merits of those claims and others. All but one of his claims were dismissed.

In May 2002 his death sentence was overturned when a federal judge ruled the instructions given by a Northampton County judge in the trialís sentencing phase were ambiguous. U.S. District Judge Anita Brody ruled the jury may not have been able to properly follow the provisions needed for death penalty sentencing.

Henry is now serving life in prison without parole. After his final court appearance in 2002, Henry apologized to the family.

"If the bereaved family [wants to] shout at me, kick me, whatever, I'm willing to do anything to help them to feel at all better," he said, The Morning Call reported.

He declined, however, to hang himself in his cell (which would indicate real remorse) and is still alive in Pennsylvania, doing life in prison. Mr. Henry rarely gets mentioned in discussions of the Clery Act and student safety.

Henry was attending Lehigh on a scholarship—the college, at the time, had only a hundred black students out of 4500. [Jo-jo Makes The Papers Lehigh Murder Suspect's Neighbors Expected Likable 'Brainiac' To Outrun Newark's Odds, By Michel Marriott, Philadelphia Daily News, April 14, 1986]

Maybe the idea of giving scholarships to "promising" youth from crime-ridden ghettos is what universities ought to review, but don't expect the New York Times to editorialize about that.