At a September 30, Washington DC meeting of about 200 immigration-sanity activists, author Janet Levy showed us several brief-but-horrific videos of doings in the Islamic world. The two I recall showed an actual stoning of several miscreants (i.e. violators of Islamic law) and an interview with a three-year-old Arab girl who was well-versed in the Islamic demonization of Jews as "apes and pigs."

Throughout her presentation, Levy referred always to "radical Islam." During the next break in the program, I remonstrated, one-on-one, with her that she'd really been talking about mainstream Islam — her subject needn't and shouldn't have the word "radical" associated with it.

Levy readily agreed with me, but explained that she'd doubted this audience was prepared to hear a truth as unvarnished as that, so she'd systematically said "radical" before "Islam," simply to keep the audience with her.

Conservative author Lawrence Auster has long insisted (at least as far back as 2000) that verbal formulations such as "radical Islam," "Islamism," "fundamentalist Islam," and "Islamofascism" are all obfuscations that prevent Westerners from recognizing the mortal threat that the basic Islam of Muhummad poses to our civilization. (My own recognition of the threat arises primarily from Auster's writings. But he now has highly visible intellectual company; see below.)

It can be frustrating being far ahead of most everyone else on a subject, because one has to keep making the same points, over and over and over. During the last couple of years, Auster has expressed his frustration with several prominent scholars of Islam — especially Melanie Phillips, Daniel Pipes, and Robert Spencer — for sounding alarms about Islam but failing to propound the obvious policy response: End significant immigration of Muslims into Western societies.

Auster has carefully unpacked some recent writings by Phillips to prove that, despite her well-expressed alarms, Phillips is — as Janet Levy feared about her own Washington audience (above) — still not ready to fully face unwelcome truths:

"Thus the conceptual framework Phillips uses for understanding Islam remains resolutely Western and non-Islamic. As she sees it, the Muslims in Britain are violating common moral standards, and this is 'vile,' 'shocking,' and 'bigoted.' The implication is that Muslims must change their behavior and start to conform to the liberal Western moral code. And she holds out the hope that the Muslims will do that, if only Britain's government and opinion-forming elite insist that they do so. This hope has always been at the heart of Phillips's writings on Islam (and it's the reason why, as I show below, she doesn't feel that Islamic immigration must be terminated or reduced). British leaders and institutions must stop approving of the Muslims' immoral attitudes and require that Muslims conform themselves to Western morality. The problem with this idea is that Muslims cannot conform to Western morality without ceasing to be Muslims, and therefore the change of heart Phillips expects and hopes for can never come about. She doesn't get this."

It's not just the scholarly elites such as Phillips et al. who have trouble conceptualizing that Islam really doesn't follow moral rules that are taken for granted in Christianity and Judaism. Some months ago, Auster posted an account from one of his correspondents about the reaction of an American audience to an unflinching lecture by an historian about the origins of Islam and the Crusades. An excerpt:

“The question and answer session after the talk lasted over an hour, and every question was about Islam, not the Crusades. The remarkable thing was that about half of the people who asked questions were so brainwashed they couldn’t understand what the speaker was saying about Islam, Muhammad and jihad. After a lengthy talk in which he explained very thoroughly that violence and oppression have been essential to Islam since its founding, he got questions like:

“’How can we encourage the true Muslims who are faithful to the Koran?’

“The historian explained why fidelity to the Koran was not something we wanted to encourage, and it obviously didn’t sink in because the man’s next question was:

“‘Do you know the names of any Muslims in public life who are really sticking up for the original teachings of Islam, people who are willing to stand up against the terrorists and say “This is not our religion”?’

“In response to an explanation of Sunnis and Shiites in which the speaker noted that Sunnis make up about 90 percent of Muslims, he got the question:

“’So the Sunnis are more peaceful, right?’ He gave a long answer that amounted to ‘not necessarily.’”

“The speaker said a bit about Ahmadinejad and the Hidden Imam, but noted that only Shiites believe in this and they only make up about 10 percent of Muslims. Question:

“’As you said, 90 percent of Muslims are committed to peace. Why do we only hear from the 10 percent who believe in violence?’”

Fortunately, Auster does, increasingly, have perceptive — and visible — company. For example, Washington Times columnist Diana West (appropriate last name!) harbors no confusion about Islam and its supposedly twisted variants; her latest on the subject is here. 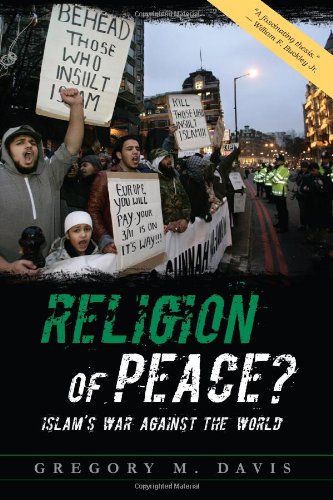 But for a sustained discussion of Islam's principles, history, and essential character, it would be hard to top a 2006 book by Gregory Davis, a recent Stanford PhD in political science. The book, Religion of Peace? Islam's War Against the World

is a companion to a documentary, Islam: What the West Needs to Know, which Davis co-directed (and which I haven't seen).

The book is spare — only about 130 pages — and Davis's prose is muscular, so reading the book is a pleasure (given the annoying need to read about Islam in the first place). Before getting the book, you can sample Davis's writing and his takeaway ideas in an online interview he did at FrontPageMagazine.

In his book, Davis gets right down to business. On page 4, he writes:

"Of course, Muslims (like Christians, Jews, and members of any religion) often fail to understand or live up to the standards of their faith. But what distinguishes Islam from other religions is that when it is correctly understood and practiced, Islam actively seeks the subjugation or destruction of everything that is not itself. Non-Islamic religions may seek the conversion or evangelization of others, and their devotees may employ force against others from time to time. But Islam is the only religion whose basic animating principles pit it against the rest of the world, ensuring that war is the natural and obligatory state of affairs."

Davis offers no mercy for those who would prefer to evade the subject. From page 19:

Davis argues, convincingly, that one doesn't have to be a Muslim or an Arabic speaker to grasp the Koran. (In fact, most Muslims worldwide don't speak Arabic and, perforce, have to deal with the Koran in translation.) He explains the Koran's organization (chapters are ordered not by themes or chronology but by length!) and the crucial rule of abrogation (when a later directive contradicts an earlier one, the later one counts).

He describes how Muhummad started out weak and mild (the Mecca period) and, as he gained supporters and strength (starting in Medina), became hell-on-wheels. He points out that the later wealth of Islamic societies was largely extracted from the peoples they conquered and slowly ground down.

Here, in its entirety, is Greg Davis's powerful closing paragraph:

"The West must awaken to the fact that it is facing nothing less than the resurgence of the greatest war machine in world history: an ideology that holds the killing of others, the plundering of their wealth, the conquering of their lands, the enslavement of their people, and the destruction of their institutions to be among the highest virtues and the stepping stones to salvation. Islam, while it continues to lack a centralized political structure, is nonetheless reacquiring the means of war it has used to such deadly effect in the past. Yet it seems that the secular West today is determined not to hear the bad news. It is hoping against hope that things are not as bad as they seem. It is hoping that the myriad acts of violence around the world done in the name of Allah are somehow not indicative of 'real' Islam. It is hoping that Muslims throughout the world calling for the destruction of America and Europe are just blowing hot air. It is hoping that Islam — a religion founded by one of history's great warlords; a religion that waged wars of aggression and conquest for a thousand years, that slaughtered and enslaved untold millions and invented modern genocide, and that today is the only force in the world that produces terrorism, suicide bombings, hostage-taking, organized rape, and massacres on a global scale — that this strange, seething, violent mass is somehow 'a religion of peace.' Rejecting this fiction and standing up to be counted will determine whether or not we survive the twenty-first century."

If you read Davis's book and attempt to enlighten others with his insights, you may run into citizens of the West who are skeptical that someone outside Islam can truly know the score. To overcome such denial, keep in your intellectual armament an interview ("'The Trouble Is the West,'" Reason Online, November, 2007) with the brave and ever-more-clearseeing Ayaan Hirsi Ali. (If you're unfamiliar with Hirsi Ali, read the introduction to the linked interview.)

The interview has two highlights. First:

“Hirsi Ali: No. Islam, period. Once it’s defeated, it can mutate into something peaceful. It’s very difficult to even talk about peace now. They’re not interested in peace.”

Others, such as Auster, will probably disagree that such peaceful mutation is possible. But at present, it's enough to recognize that basic Islam is the enemy, as Hirsi Ali is now saying.

And here is the interview's closing highlight:

“Hirsi Ali: It’s not about respect. It’s about power, and Islam is a political movement.

“But I don’t even think that the trouble is Islam. The trouble is the West, because in the West there’s this notion that we are invincible and that everyone will modernize anyway, and that what we are seeing now in Muslim countries is a craving for respect. Or it’s poverty, or it’s caused by colonization. [emphasis in original]

“The Western mind-set — that if we respect them, they’re going to respect us, that if we indulge and appease and condone and so on, the problem will go away — is delusional. The problem is not going to go away. Confront it, or it’s only going to get bigger.”

Read Davis's book. Read the Hirsi Ali interview. Please. And spread the word. Do it for your civilization.