The End Is Nigh: Ruling Class (Including Congressional GOP) Now Openly Seceding From Historic American Nation 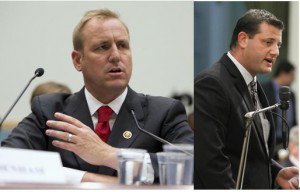 They aren’t even pretending to care about the country anymore:

Still, the California congressmen are making sure voters know they support an immigration overhaul. They're aware that Democrats will try to turn the congressional gridlock into an advantage during this year's midterm elections.

The U.S. Chamber of Commerce spent $300,000 on television ads in Valadao's district, noting that he is the son of immigrants. Denham highlights an award he received from the nation's largest Latino advocacy group for "putting sound immigration policy over party politics." He was the first Republican co-sponsor of a sweeping immigration bill now stalled in the House.

America’s entire political elite—Republican, Democrat, and the Democrats’ MSM auxiliary—is openly bragging about its alliance against the historic American nation. Republican leaders—and Conservatism Inc.—keep trying to push through the Amnesty/Immigration Surge, but public outrage keeps forcing them to retreat. The end result: Barack Hussein Obama may simply expand his Administrative Amnesty, with the silent approval of the GOP Congressional leadership.

This battle has now gone beyond immigration. It’s inexorably becoming clear that the historic American nation has no stake in the survival of the Republican Party, the Beltway Right, or even the current American system of government.

Obama is already showing his willingness to inflict unilaterally millions of illegal infiltrators on the long-suffering American middle class. His diversity appointee supposedly in charge of “Homeland Security” is already trying to think of ways to stop all deportations.

But this utter refusal to obey the law has been largely ignored by Congress. The exception, as usual: Senator Jeff Sessions (R-America), who recently released a seventeen-page timeline chronicling in detail the Obama Administration’s repeated violations of immigration law [Sessions Updates Catalogue of Obama Administration Immigration Non-Enforcement, by Caroline May, Breitbart, May 16, 2014]. Sessions was joined in his condemnation of the Obama Administration by Congressman Walter Jones. Jones just survived an attack by the Beltway Right, ostensibly because of foreign policy but also driven by Conservatism Inc.’s desire for someone more willing to collaborate with President Obama and the Slave Power’s desire for more immigrant cheap labor.

Even more outrageous: the Obama Administration’s decree releasing 36,000 criminals last year, including murderers and rapists, back on to American streets [GOP’s New Immigration Weapon, by Mike Lillis, The Hill, May 16, 2014]. What Fidel Castro did to deliberately hurt the United States when he opened his jails during the Mariel Boatlift, President Obama is doing to what is ostensibly his own country.

Even squishy Republican Congressblob Bob Goodlatte condemned the Obama decree—although notably dodging by saying it was bad “regardless of one's position on the larger immigration reform question”).

Nonetheless, the Republican reaction to President Obama’s actions seems to speak more of ruffled feathers than moral outrage. Republican leaders like Speaker John Boehner need President Obama to at least pretend to enforce the law for a little, while so that Boehner can betray his supporters and deliver Amnesty to his donors.

The Obama Administration refuses even to do this. Instead, Valerie Jarrett, Obama’s “senior advisor,” giggled before an audience of “investors…elite political donors…hedge fund managers, political and business leaders, and celebrities” that the Administration has a commitment from Boehner that the House GOP will move on Amnesty before August. She also noted that Boehner is “very frustrated with his caucus.” [Valerie Jarrett: ‘We Have Commitment’ from Boehner on Amnesty This Year, by Tony Lee, Breitbart, May 15, 2014]

Boehner of course had already declared to his donors that he is “hell-bent” on getting Amnesty done, and mocked his own colleagues within the Republican Party. Obviously, Jarrett was telling the truth.

However, Boehner and Jarrett, embarrassed, are now collaborating on a cover story. Thus Boehner’s spokesperson said: “Republicans are committed to reforming our immigration system, but as the Speaker has said repeatedly, it’s difficult to see how we make progress until the American people have faith that President Obama will enforce the law as written.” Jarrett added, lamely, that Boehner only said he would “try.” [John Boehner disputes Valerie Jarret immigration description, by Jake Sherman, Politico, May 16, 2014]

A similar scandal is playing out within Conservatism Inc. Grover Norquist, who has spent his life failing at his stated goal of limiting government, is once again organizing a collection of useful idiots, corporate lobbyists, and self-interested professional minorities to help save Obama’s presidency by passing Amnesty/ Immigration Surge. Last week, Norquist and his allies had a strategy call discussing how Obama “could overcome the hurdle” of Republicans who annoyingly insist that he do his job and enforce immigration law. Their conclusion: there remains a window of opportunity over the summer, once GOP lawmakers had finished their primary elections. [Conservatives prod GOP on immigration, by Russell Berman, The Hill, May 14, 2014]

This also corresponds with reports from business leaders snickering that Amnesty will be the “last act” of the lame-duck Congressional session. [Business Execs: Amnesty Legislation Will Be Last Act of Lame-Duck Session, by Tony Lee, Breitbart, May 13, 2014]

Not surprisingly, one of the schemers against the conservative base is the professional Hispanic, ethically questionable Cuban lobbyist Al Cardenas, the head of the American Conservative Union. Cardenas has been doing his part to keep immigration patriots out of CPAC —with limited success.

More important was Sal Russo, a co-founder of “Tea Party Express,” who was quoted by Breitbart’s Berman as saying that “Conservatives should be leaders in the immigration reform movement.” This isn’t particularly surprising, as “Tea Party Express” is a notorious scam operation, with most of the money donating going to the parasitical Republican “consultants”—including Russo—who founded it. [Majority of Tea Party Group’s Spending Went to GOP Firm That Created It, by Zachary Roth, Talking Points Memo, December 28, 2009]

(This is something I can personally verify, having seen the group blow through an obscene amount of income on overhead with almost nothing actually produced.)

However, though having something with the name “Tea Party” is useful to Norquist’s Amnesty efforts, the scam doesn’t work if the grassroots start seeing through it. Thus Russo frantically backtracked on the Laura Ingraham Show, absurdly claiming to stand with Senator Jeff Sessions and American workers. Not surprisingly, Ingraham was having none of it, questioning him how Amnesty would help American workers. Also not surprisingly, Russo had no answer. [After Backing Amnesty, Tea Party Express Chair Claims He Stands With Sen. Sessions, American Workers, by Tony Lee, Breitbart, May 15, 2014]

What unites Jarrett, Boehner, Cardenas, and Russo: the belief that the current existing American people is the enemy that needs to be somehow overcome.

The ever-predictable fashionable homosexual Andrew Sullivan best summarizes this view in a post decrying the current rise of UKIP, which is increasingly challenging the attempts of British leaders to replace their own people, preferably with Muslims.

Sullivan pontificates that conservatism at its best is “an imaginative attempt to balance stability and change in a manner which makes a society more coherent, more itself.” Yeah, maybe. But then he continues: “At some point, mass immigration or a multi-cultural society or a gay-integrated world becomes the status quo to which conservatives will become attached.” But until that happens and conservatives become properly neutered, he complains, what pops up is unacceptable “fear and anger.” [Conservatives and Immigration, The Dish, May 7, 2014]

Sullivan’s “conservatism” in regards to immigration is a model for what Boehner, Cardenas, and Russo apparently want. Somehow, America becomes “more coherent, more itself” by electing a New People—the only kind of “election,” in fact, the entire political class seems to support. And what they all seem to be afraid of is conservatives—especially whites—having the nerve to protest their dispossession.

Of course, what conservatism has to preserve at the most basic level is the nation and the people itself—otherwise, what is the point of having a military or government in the first place?

The President of the United States is, right now, breaking the law in order to replace Americans with criminals who he can count on to vote for his party. The nominal opposition party is openly discussing how it will betray its own voters to benefit its donors. And the self-styled defenders of America, the Beltway Right, is largely a scam.

But the historic American nation is still there—abused, oppressed, and being ground into the dirt.

Nevertheless, be it through a Republican champion like Senator Jeff Sessions, a Third Party, secession, or some other outlet, the historic nation needs and will find a political expression. At present it is wholly unrepresented in the ruling elite.

Regardless of the outcome of the Amnesty battle, the overt scorn, hostility and corruption being flaunted by the Beltway political class must show Americans that these parasites are in no way “our” leaders.

They are simply our Occupation Government.