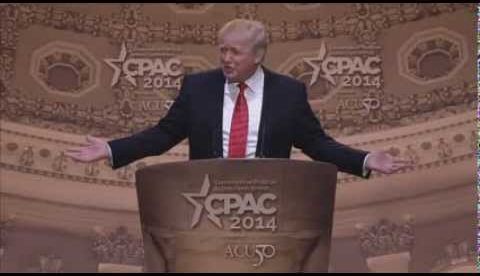 And The Same To You, Al Cardenas! CPAC Secession Movements Show The Way Al Cardenas (email him) the Cuban immigrant who succeeded the ethically-challenged David Keene as chairman of the American Conservative Union, must be breaking out the mojitos tonight! The trendy Leftist Daily Beast is writing favorably (or at least less unfavorably) about ACU’s flagship Conservative Political Action Conference, which starts in Washington D.C. on Thursday March 6. [Is CPAC Getting Less Crazy?, by Dean Obeidallah, March 4, 2014). What more could a Conservatism Inc. apparatchik want? (Oh, yes, more fees).

At VDARE.com, we’re kind of amused too: the nadir from which CPAC is allegedly climbing back is…moi!

[T]he American Conservative Union’s annual conservative political convention has increasingly become a showcase for the worst of the right.

Who can forget the 2012 CPAC panel, “The Failure of Multiculturalism: How the Pursuit of Diversity is Weakening the American Identity”? This program featured Peter Brimelow, a person the Southern Poverty Law Center (SPLC) described as leading, “a race-baiting hate group that warns against the pollution of America by non-whites, Catholics, and Spanish-speaking immigrants.” [Link in original]

Of course, what unforgettably happened in 2012 was that, in its now-familiar Journolist-style orchestrated way, the Left/ Main Stream Media (is there any difference?) wanted to embarrass CPAC, followed Spencer Ackerman’s famous prescription (“find a rightwinger’s [sic] and smash it through a plate-glass window. Take a snapshot of the bleeding mess and send it out in a Christmas card to let the right know that it needs to live in a state of constant fear”) and found (absurdly) me. (See here and here and here).

In fact, Obeidallah has solved a puzzle for me: why so many echo-chamber MSM reports claimed I’d said immigration was “polluting” America. I didn’t, and there’s a recording to prove it. But I see now that they were just mechanically scalping the pre-written $PLC smear to which Obeidallah links. The SPLC itself didn’t even pretend to be quoting me, it’s just paraphrasing i.e. inventing out of whole cloth. (Still, as the husband of a Catholic wife and the father of two little Catholic daughters, I remain puzzled where the anti-Catholic allegation comes from.)

Needless to say, Obeidallah (who I assumed was a Nigerian con artist but who turns out to be another argument against Muslim immigration) doesn’t address the actual content of my talk: the public-choice consequences of creeping official bilingualism, as illustrated by the Canadian case.( I know, snore.)

That’s because Obeidallah did absolutely no research. I know this because, if he had, he would have been ululating about a much more prominent Thought Criminal: John Derbyshire, whose talk on the same panel, Will Our Multicultural Elites Ever Become Race Realists?, really was radical, although his then-editors at National Review, who don’t slum at CPAC, apparently didn’t notice—then.

Cardenas responded to this trumped-up controversy with a Romneyesque profile in cowardice:

Al Cardenas, director of the American Conservative Union (ACU), which organizes CPAC, said he had never heard of Peter Brimelow, editor of VDARE.com, who has been labeled a white nationalist by the Southern Poverty Law Center.

"I don't really know what his values are," Cardenas said. "I have asked my staff to delve into that."

"I want to personally see what he precisely said or written before forming judgment," he said.

… Cardenas promised to look into the controversy surrounding Brimelow. "If we find... grounds offensive to what American ideals stand for, I will talk to the sponsor and take it from there," he said.

(Note, by the way, that Leigh Ann Caldwell, mouthed—and in fact extended—the mantra that “[d]uring the panel discussion, Brimelow and other panelists said immigration is polluting America.” Emphasis added. She seemed like a nice young girl. Probably her editors inserted this into her copy. She should be more careful.)

My response to Al Cardenas: And the same to you, amigo! I’d never heard of you, either—but I’m not running a major Conservatism Inc. Beltway Bandit conference, just a grassroots website devoted to principles, policy, patriotism, ideas and ideals. (That’s IDEALS—look it up in the dictionary.)

Incidentally, as far as I can make out, Cardenas (and his “staff”) never did approach my sponsor. So I guess I’m ACU-certified!—unless Cardenas is a blow-hard and a liar.

I said that National Review editors don’t slum at CPAC. That’s because the conference’s great strength (and value) is that it is a grass-roots event—albeit brutally exploited by a Conservatism Inc. Beltway in-group.

I wanted to clue you in on some of the problems that are observable for this year's CPAC. First, if you didn't make their "early bird rate" ($3 grand just to be an exhibitor), you saw Exhibitor prices jump up to $4,000. Not only is this an increase from the previous year—both for early bird rates and post-early bird rates—they're including less tickets for groups. So organizations are forced to buy additional tickets if they want to have enough of their group manning the booths.

And what do these higher co-sponsor and sponsor rates get you? Not much, from what I could tell. In the past, co-sponsors were allowed to hold their own events concurrently with the official CPAC events. This allowed for Breitbart and Judicial Watch to hold events on topics the officials do not like. But now, if you're a sponsor, you are given no extra rooms to hold your own events, like groups in the past were.

In other words, much tighter ideological control. But also price-gouging:

It looks like CPAC even cut back on the banquet tickets they usually throw at groups who sign up for sponsor ship levels.

The location is at the pricey Gaylord Hotel at the National Harbor—far from a Metro, making it inconvenient for college kids, traditionally the heart of CPAC.

Speaking of Conservative Inc., look who is organizing CPAC for the ACU—a group called MRA Services. This group handles logistics for all manner of conferences and conventions across the country.

It used to be the only thing ACU did was create Congressional scorecards and organize CPAC. Now they don't even organize CPAC anymore.