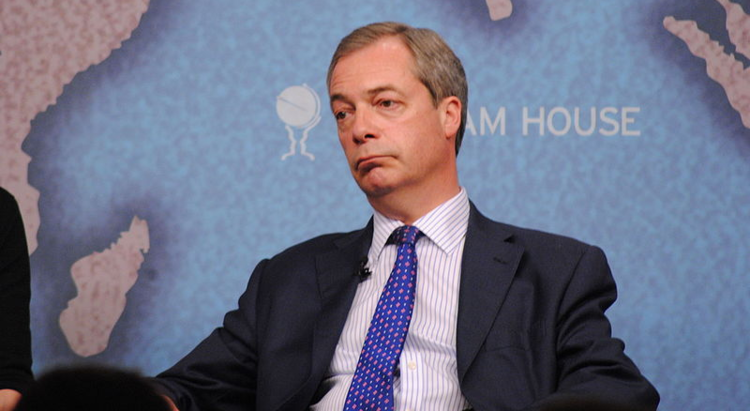 Nigel Farage and UKIP: A Step in the Right Direction

Finally, undepressing news out of England!—what appears to be the imminent breakthrough in the May 22 European Parliamentary elections for the United Kingdom Independence Party (UKIP) and the emergence of its leader, Nigel Farage as the most popular politician in the country. [UKIP leader Nigel Farage "most popular party leader", says poll, By Asa Bennett, LondonlovesBusiness.com, March 15, 2013] I know some American patriots have preferred the British National Party and are suspicious of what has been called (not without reason) “the Conservative party in exile.” But I believe UKIP is a step in the right direction.

The European Parliament is a body with little real power. Most decisions in the European Union are made by the permanent bureaucracy. Its main rival is the Council of Ministers, an ad hoc committee of politicians from the individual member states. Paradoxically, however, this means the five-yearly Euro-elections have become an opportunity for people to vote for the party they really like.

UKIP results for the past twenty years:

Because of its past and expected success, UKIP has finally been given equal status with the Conservative, Labour and Liberal Democrat Parties by the Main Stream Media and by the Electoral Commission. After its years of virtual blackout, a party flatly opposed to the existing order of things will fight the coming Euro-election as an insider.

The credit for this remarkable achievement belongs to UKIP’s leader, Nigel Farage. He stands for EU withdrawal on “Thatcherite” grounds—his economic policies are free trade, low taxes and skeletal regulation. His other policies: secure the borders and deal with illegal or fraudulent immigration; and to restore Britain’s traditional liberties by stripping all Political Correctness out of law and administration.

I have spoken with Farage several times, and watched him speak with others. What he says in private is an abbreviated and more scathing version of what he says in public. UKIP is a force in its own right. But that force is greatly magnified when its leader is a man of conviction.

In contrast, the leaders of the three mainstream parties in Britain are effectively interchangeable. David Cameron (Conservative) is related to the Queen. Ed Miliband (Labour) is an ethnic Jew. Nick Clegg (Liberal Democrat) is half-Dutch. The differences end there.

All three are rich. They all have the same Politically Correct opinions, and are committed to the same Globalist agenda. In foreign and military policy, they all take their orders from Washington’s neoconservatives. None has had a proper job outside politics and government. They are all patronising liars. Their only meaningful point of difference is over which of them should lead the dance to the off-stage band.

Farage has made UKIP unbeatable in any fair debate. In March and April 2014, Farage took part in two televised debates with Nick Clegg, who as well as leader of the Liberal Democrats is also Deputy Prime Minister. The idea was to put Mr Farage against one of the most intelligent and engaging front men for the Ruling Class, and give the debate maximum coverage. The organizers truly believed that Farage would be revealed as a bag of wind mouthing a few populist slogans.

I cannot imagine what hubris led Clegg to agree. He lost the first round, and was utterly crushed in the second.

But debate is only part of the Ruling Class response. Ignoring UKIP has failed. Arguing with it is failing. Smearing it may still work.

Hence the relentless drumbeat in the MSM of claims that UKIP is filled with racists, sexists, homophobes, general lunatics, sluts—and that Nigel Farage is a bad man in his own right.

In 2006, David Cameron said in a radio interview that “Ukip is sort of a bunch of ... fruit cakes and loonies and closet racists mostly.” [Ukip are closet racists, says Cameron, By Jamie Lyons, Independent, April 04, 2006]In 2013, Andrew Feldman, one of Mr Cameron’s university friends, and a close political ally, called UKIP activists “Swivel-eyed loons.”[Ukip sees surge in interest after Tory brands activists swivel-eyed loons, By Rowena Mason, Telegraph, May 19, 2013] Also in 2013, Michael Heseltine—a strong supporter of the EU and one of the backstabbers who helped bring Margaret Thatcher down in 1990—called UKIP a “racist party”—“Of course it’s racist, who doubts that? Farage isn’t racist but his party is very attractive to a racist agenda.” [Ukip is a racist party, says Heseltine, By Christopher Hope, Telegraph, October 02 2013]

Every utterance made on the internet by any minor UKIP activist or candidate is now being trawled by the MSM for evidence of Political Incorrectness. Thus one has been pilloried for calling Islam an “organized crime under religious camouflage”, another for suggesting that Nigerians can be criminals. [Ukip local elections candidates' 'racist' language is exposed, Eveing Standard, May 1, 2014.] Godfrey Bloom, a UKIP member of the European Parliament, was reported to have called the Third World “bongo bongo land.” [Godfrey Bloom: 'Bongo Bongo Land' Should Not Get Aid, Ukip Launch Investigation Into MEP's Rant, By Tom Moseley, Huffington Post UK July 8, 2013] A UKIP local councilor was given national coverage when he suggested that the winter floods were God’s punishment for allowing the sin of gay marriage. [UKIP councillor blames storms and floods on gay marriage, BBC, January 19, 2014[

Nigel Farage in particular has been subjected to repeated and vicious attack. The MSM filled with claims that he fiddles his expenses in the European Parliament that he is an adulterer [Could Nigel Farage's 'weakness for women' be his Achilles' heel?, by Andrew Pierce, MailOnline March 14, 2014] and that he runs UKIP as a tyrant.[ UKIP: Nigel, Kirsten & Annabelle Fuller Junius on UKIP, March 19, 2014.]

Some of this may be true. But nothing reported comes close to showing that UKIP or its members are preaching violence against homosexuals and ethnic minorities, or calling for Christian theocracy. The words reported are either fair comment—or used to be part of the common currency of politics when England was a free country.

As for Farage, no one is perfect. Establishment politicians mostly lead private lives of astonishing squalidness. And the only alternative to autocracy in a political party is rule by monomaniacs with a partiality to five hour committee meetings. Mr Farage tyrannizes over UKIP, and good luck to him, in my view.

In any case, the smears have failed. UKIP remains on target to win the European elections. Wherever he goes, Farage draws bigger crowds than the Prime Minister.[ Nigel Farage says UKIP could cause an 'earthquake' in British politics, By Natalie Robinson, Cambridge News, May 3, 2014.]

One criticism is worth dealing with: that UKIP and Farage are not sufficiently nationalist.

My simple answer: I like economic liberalism and middle class patriotism. My longer answer: the defeat of Political Correctness is the first step to overthrowing the present order of things. After that, we can argue about what comes next.

For this, UKIP is a more powerful opposition movement than the BNP ever was.

Economic liberalism and civic nationalism are the default prejudices of the English mind. For all it tried to reach out, the BNP was always an exotic import in terms of ideology. For all it has tried to live down its past—for all, perhaps, it has rejected it—its leaders may be too compromised by what they said and did before about 2000.

UKIP has no inconvenient baggage. And, if pan-nationalism is to have any meaning, it must surely allow every people to express its nationality in its own way. The French and Germans must have their national statism. America must have its constitutional purism behind trade barriers.

Let us Brits have our warmed-over Victorian liberalism.

Dr. Sean Gabb [Email him] is a writer, academic, broadcaster and Director of the Libertarian Alliance in England. His monograph Cultural Revolution, Culture War: How Conservatives Lost England, and How to Get It Back  and his  novel The Churchill Memorandum and other works can be purchased through Amazon.co.uk.  For his account of the Property and Freedom Society's 2008 conference in Bodrum, Turkey, click here. For his address to the 2009 PFS conference, "What is the Ruling Class?", click here; for videos of the other presentations, click here.