Steve Scalise, The NEW REPUBLIC And The End of Journalism

Another day, another Main Stream Media megaphoning, this time orchestrated to destroy Rep. Steve Scalise, #3 in John Boehner’s GOP House sellout leadership team. The New Republic is piling on just like the rest with race-baiting anti-Southern pieces that could have appeared anywhere: Steve Scalise's David Duke Scandal Says More About Republicans Than the Party Will Ever Admit, by Brian Beutler, December 30, 2014.

There’s a more general point here. The New Republic has no longer exists—at least, not in any way that matters. But of course, neither does real journalism. It’s been replaced by the cult of mediocrity we call diversity.

This story of internal dissent at a little magazine that has long since traded on its past glories received massive coverage in the Establishment press. New York Times token conservative David Brooks bemoaned the “destruction” of The New Republic magazine by a “callow and incompetent” owner in his yearly roundup. [The Sidney Awards, Part I, December 25, 2014] The Volokh Conspiracy’s Will Baude regretted the loss of a magazine that, in its own words, had “the abiding belief that ideas matter.” [The last remnants of the old New Republic have been swept away, December 8, 2014] And former editor Andrew Sullivan mourned:

That’s what’s missing in this era of pageviews and clickbait and sponsored content: a self-confident team that, at some level, doesn’t give a [s***] what others or even readers believe, as long as the debate itself is rigorous, fair, open and reasoned.

These kinds of self-glorifying tributes are part of the MSM’s infuriating and unjustified elitism. Liberals constantly honor their own courage for cautiously engaging in a controlled debate over issues that actual conservatives are fearlessly confronting with far more integrity, sophistication, and intelligence.

But TNR loyalists are still correct to mourn the end of their venerable institution. The idea that journalism could be more than a product and commentary could serve a higher function than clickbait is a noble one. Of course, it assumed an intellectual upper class that is actually interested in debating critical ideas and in advancing the public interest.

That no longer exists—and furthermore, it can’t exist, once sole purpose of public debate becomes calling people various names for the purpose of ethnic rent-seeking. So as you might expect, the backlash against TNR followed immediately after the tributes, and the tactic was predictable—call the old magazine racist.

And new TNR editor Gabriel Snyder, capitalizing on the shifting Narrative, preened that the new New Republic will be better because there will be contributors “diverse in race, gender, and background.” [New editor says TNR will be ‘more diverse, by Hadas Gold, Politico, December 22, 2014] 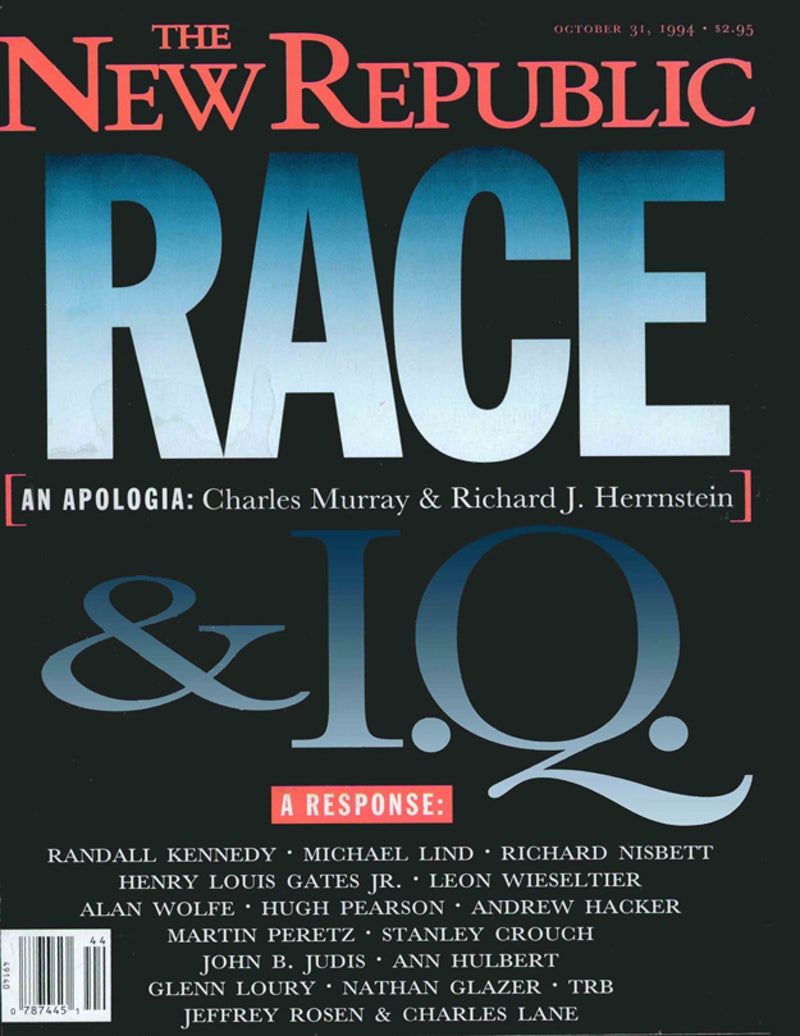 The most widely-cited critic: the “Affirmative-Action mediocrity grumbling ceaselessly about Whitey” who calls himself Ta-Nehisi Coates. Coates is still triggered because TNR, among other sins, ran a cover story on The Bell Curve when Sullivan was in charge. Coates intoned solemnly:

One person recalled a meeting at the magazine's offices when the idea of excerpting The Bell Curve was first pitched. Charles Murray came to this meeting to present his findings. The meeting was very contentious. I asked if there were any black people in the room this meeting. The person could not recall.

[The New Republic: An Appreciation, The Atlantic, December 9, 2014]

What’s interesting about this is that Coates implies that the inclusion of black people—any black people—would have led to “spiking” the discussion.

In response to Coates’s attack, Andrew Sullivan tried to triangulate against “National Review, an opponent of civil rights laws” or a hypothetical magazine “filled with bigoted white Southerners, as opposed to an overwhelmingly Jewish set of writers and editors engaged in a long and internecine debate about what it means to be liberal.” [Excuse me, Mr Coates, The Dish, December 22, 2014] Sullivan also noted the strong criticism aired against The Bell Curve within TNR.

However, to his credit, Sullivan did defend the magazine’s decision to confront the Bell Curve and TNR’s issue on Race & IQ, “of which I remain deploy proud.”

Ta-Nehisi Coates’s response was that response of a willfully ignorant child. .

Life is short. And there are much more pressing—and actually interesting—questions than "Are you less human than me?"

But when the entire political, media, and academic Establishment is built around catering to such tantrums, what can you expect?

Among knowledgeable and literate people, the existence of racial differences in intelligence is no longer up for serious argument. And yet every time the issue breaches the cordon sanitaire of the Main Stream Media (or for that matter, Conservatism Inc.), the repression is swift and systematic.

The argument that racial and sexual diversity will lead to a better discussion is precisely the rationale used to justify anti-white and anti-Asian racial quotas in college admissions. Needless to say, there’s no evidence that it enhances education—but quite a bit that it prevents any worthwhile discussion from taking place. Coates’s comments show that this process is spreading into opinion journalism, where diversity will be used to prevent debate from taking place.

In response to worries that TNR will simply turn into Buzzfeed, Coates gloats that “No publication has more aggressively dealt with diversity than BuzzFeed.” And Buzzfeed is indeed leading the way in transforming American journalism into a more vulgar version of East German state media, with outlets such as the Gawker network and Salon following their business model of faux outrage and Narrative repetition.

No one even bothers with the pretense of discussing ideas—the media’s megaphone has a life of its own and create issues out of virtually nothing, as in the Scalise case. Salon in particularly was famously lampooned with a satirical Twitter account that was all but impossible to distinguish from the real thing.

The rhetoric justifying the transformation of TNR is actually similar to that used to push mass immigration. The regressive cheap labor agenda of the Chamber of Commerce and of the bipartisan political elite is promoted as multiculturalism and anti-racism. Here, TNR’s transformation from a journal of ideas to just another profit-focused clickbait generator is justified in the name of “diversity.”

These buzzwords are not designed to enable debate but shut it down, ensuring that nothing of any seriousness is actually discussed. American journalism will resemble nothing so much as a giant American college campus, where debating serious ideas has devolved from dangerous to unthinkable within a generation. We even have media scams like the UVA Hoax and Ferguson to complement the fake hate crimes on campus.

Diversity destroys social trust, and that kind of trust is necessary to have a meaningful conversation that won’t end in name-calling and exercises in racial extortion. Our unaccountable ruling class’s contempt for the historic American nation mean that the kind of urbane and sophisticated debate to which TNR aspired can never occur again.

However, there’s a silver lining in all of this. As The New Republic is replaced by the likes of Buzzfeed and Salon, no one can pretend that the MSM is anything other than crude, amateurish, and hostile. The likes of a Ta-Nehisi Coates have nothing to contribute but increasingly clumsy demands for our money, property, and obeisance.

The real debate is taking place within the Dissident Right where a serious intellectual force is defending the interests of the historic American nation that our irresponsible and increasingly illiterate “elite” has long since abandoned.