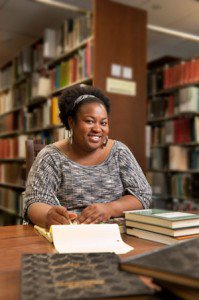 This is Dr. Brittney Cooper, Assistant Professor of Women's and Gender Studies and Africana Studies at Rutgers. This is her version of her train ride to hell, in a train which , thanks to the Civil Rights act of 1965, has both black and white patrons.

How White Entitlement Marred My Trip to a Ferguson Teach-In

On Friday, I was on the train to New York to do a teach-in on Ferguson at NYU. Beats headphones on, lost in thought, peering out the window, I suddenly saw a white hand shoving my work carry-on toward me. Startled, I looked up to see the hand belonged to a white guy, who was haphazardly handling my open bag, with my laptop perched just inside to make space for himself on the seat next to me.

That he wanted the seat on the now full train was not the problem. That he assumed the prerogative to place his hands on my bag, grab it, shove it at me, all while my computer was unsecured and peaking out, infuriated me. I said to him, “Never put your hands on my property.”

His reply: “Well, you should listen when I talk to you.” That line there, the command that when he, whoever he was, spoke, I should automatically listen encapsulates the breadth of the battle against racism we have to fight in this country.

Buoyed by his own entitlement, his own sense of white male somebodiness, this passenger never even considered that he might simply try harder to get my attention before putting his hands on my stuff. His own need to control space, his own sense of entitlement to move anything in his way even if it held something of value to another person, his belief that he had the right to do whatever he needed to do to make the environment conform to his will are all hallmarks of white privilege.

In the reverse scenario, a black man would never get on the train, snatch up a white woman’s bag, and shove it in her face. But then black women are rarely entitled to the courtesies proffered to white women, and black people never presume they are entitled to occupy interracial spaces so aggressively.[More]

What Cooper, email her, doesn't get is that this not Clarksdale, Mississipi in 1965. She's the entitled professor traveling from black-ruled Newark to Bill de Blasio's New York to do a teach-in on how to hate white  people in Ferguson, Missouri. As for her idea that black people "never presume they are entitled to occupy interracial spaces so aggressively", what does she think she's doing? And has she never ridden a New York subway car?

White riders in NY subways have reported many incidents like this:

Once, I was on the train with only two or three other people, one of whom was a middle-aged black male. He seemed normally dressed, but started to slap the windows and seats in a hard, rhythmic fashion—almost like some kind of African war drum. It got louder and scarier, and then he started to chant incomprehensibly. What I could make out, though, was “I’m gonna kill me a m*thaf*ckin’ white man”. I looked around, and to my horror, noticed I was the only white man on the train. I felt a fear like I had never felt before in my life. There were no police on the train. There were no cameras. Cell phones did not work from the train. Of course, I had no weaponry on me. I am 6 feet tall and was in decent shape, but against a crazy and possibly armed black male seething with racial hatred, I had good reason to be afraid.

In an op-ed in the NYT, the equally entitled (an emeritus professor Brown University) John Edgar Wideman had the opposite complaint, as described by John Derbyshire in TakiMag

The gist of Mr. Wideman’s piece is as follows. He lives in New York City. He teaches at Brown University in Providence, Rhode Island. He rides the Amtrak train between the two cities. He boards early and takes half of a vacant double seat. En route the train fills up, but nobody sits next to him. Because he’s black!

“But the very pleasing moment of anticipation casts a shadow, because I can’t accept the bounty of an extra seat without remembering why it’s empty.…”

It’s empty because he’s black! And white people hate, or fear, or hate-‘n’-fear black people so much, they won’t take a seat next to one!

Perhaps Wideman [Email him] and Cooper could share a train to the next teach-in?