Former TNR Editor: "How the New Republic Stopped Being a Jewish Magazine"

How The New Republic stopp 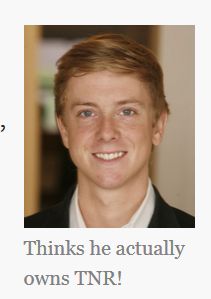 ed being a Jewish magazine

When it was born a century ago, Jewish intellectual influence in America was on the rise. Now it’s starting to decline.

Last week, The New Republic, the magazine I used to edit, fell apart. The owner ousted the top two editors, most of the senior staff resigned, and while something called The New Republic will continue, it is unlikely to bear much relationship to the crusading, literary publication founded by Walter Lippmann and other progressive intellectuals 100 years ago.

It’s an important moment for American Jews because for the last 40 years, The New Republic has been a culturally Jewish magazine. Jews had always worked at TNR; Lippmann himself was an assimilated German Jew. But in 1974, when Martin Peretz bought The New Republic, it came to reflect his very public Jewish identity. TNR became a remarkable hybrid, only possible because of the extraordinary acceptance and privilege afforded to Jews in late 20th century America: an influential liberal political magazine that was explicitly informed by Jewish sensibilities and concerns.

The most obvious manifestation was the magazine’s coverage of Israel. Peretz was a fervent Zionist and made defending the Jewish state one of the magazine’s chief passions. But even when Peretz stepped down as editor in chief in 2010, TNR’s Jewish identity endured.

Under literary editor Leon Wieseltier, the magazine remained an indispensable source of commentary on Jewish history and culture. And inside the magazine, yiddishkeit was rarely far away. I remember once hearing Wieseltier explain that he had asked an author to submit his book review by Rosh Hodesh. “That’s how Malcolm Cowley used to do it,” he added wryly. The implication was clear. Cowley had been TNR’s literary editor in the 1930s, when American Jews were still outsiders. Now his successor was a graduate of Yeshivah of Flatbush. American Jews had arrived.

As a force in American journalism, we certainly have. Jews edit The New York Review of Books, The New Yorker, The Weekly Standard, The Atlantic, Foreign Affairs, Foreign Policy, Vox, Buzzfeed, Politico, and the opinion pages of The New York Times and Washington Post.

But it’s unlikely to last. Although the ouster of Wieseltier and editor Frank Foer had nothing to do with their being Jewish, the likely end of TNR’s Jewish sensibility may portend the declining influence of Jewish culture in American intellectual life. One driver of that decline will be assimilation. With the intermarriage rate among non-Orthodox Jews now above 70 percent, Jewish identity in the United States is becoming less and less distinct. For many decades to come, there will still be plenty of people with some Jewish ancestry writing and editing at America’s most prominent publications. But increasingly, being of Jewish descent will no more inform their work than being of Italian or Irish descent informs the work of their assimilated Christian colleagues. One likely result will be declining coverage of Israel. Many of the most prominent American Jewish journalists in their late 40s, 50s or 60s – Wieseltier, Thomas Friedman, David Remnick, Roger Cohen, Jeffrey Goldberg, William Kristol, Jennifer Rubin, Charles Krauthammer – write about Israel frequently. By contrast, the most successful Jewish journalists in their 20s and 30s – Ezra Klein, Matthew Yglesias, Ben Smith, Dana Goldstein, Spencer Ackerman – write it about it much less.

As far as I can tell from reading the second volume of his autobiography, Norman Podhoretz wasn’t interested in Israel during the first half dozen years he edited Commentary, but then became a huge booster at the time of the Six Days War in 1967.

The other factor eroding Jewish influence in American journalistic and literary life is demographic change. In recent decades, the percentage of Jews in the United States has declined. The percentage of Latinos and Asians, by contrast, has shot up.

Yes, high end opinion journalism in the U.S. is increasingly dominated by the 50+ million Latinos. For example, one of the TNR staffers who resigned to protest the little blonde billionaire owner of TNR thinking he actually owned TNR is Mexico City-born Enrique Krauze.

Chinese-American intellectuals are omnipresent, as well.

Numbers don’t automatically translate into influence. But writers from South Asia – most of whom came to the United States (or whose parents came to the United States) as well-educated, native English speakers – are already having an immense impact. As India and China rise, and America’s relationship with them increasingly overshadows its relationship with Europe and the Middle East, writers with intimate knowledge of those countries will become increasingly prized. Today, four of the 11 regular columnists on The New York Times op-ed page are Jewish while none are Asian or Latino. In the coming years, that will almost certainly change.

In 2009, The Atlantic picked out its “Atlantic 50? of the supposedly 50 top pundits in the U.S. I counted up the demographics of them here.

This is how it has always worked in America. When The New Republic was founded 100 years ago, Jews were rising in both numbers and influence. Now we’re beginning to decline.

What’s the evidence other than the no doubt deplorable existence of Chris Hughes, who has a lot of money because he was Mark Zuckerberg’s (Platonic) roommate?

It’s the nature of living in a country that allows in immigrants from different religious and ethnic backgrounds, and, for the most part, lets them shed those backgrounds if they wish.

In my mid-20s, when I came to The New Republic full time, I remember being delighted that I could so easily integrate my Jewishness into my work. After two years at Oxford, where being Jewish was considered something best kept to oneself, I felt like I could finally exhale. It saddens me that in the decades to come, young American-Jewish journalists may neither have that experience, nor even desire it. On the other hand, I can imagine a day when an editor at The New York Times or The New Yorker or maybe even The New Republic wryly tells a colleague that her article is due by Diwali, Chinese New Year, Eid al-Fitr or the Day of the Dead. The thought makes me smile.