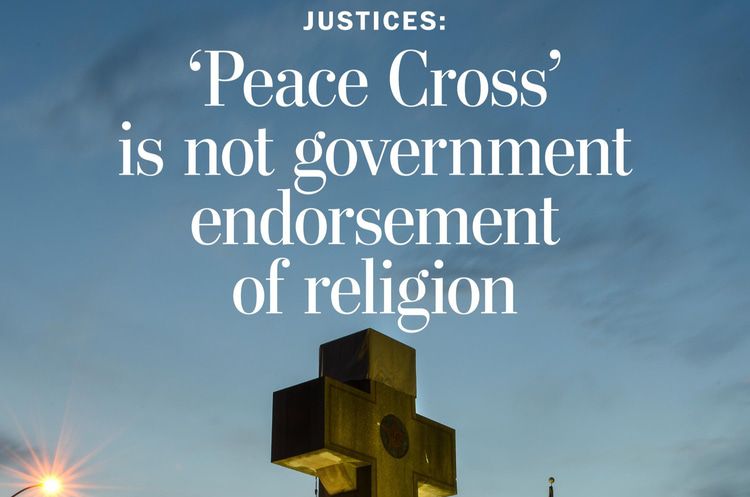 Court Votes Not To Tear Down Peace Cross, 7-2...Because Hillary Lost

None of the other seven justices did. What would a case look like if Hillary had won?

The Supreme Court ruled Thursday that a large cross erected as a tribute to war dead may continue to stand on public land outside Washington in the Maryland suburbs.

The justices reversed a lower court that said the cross was an unconstitutional endorsement of religion.

“The cross is undoubtedly a Christian symbol, but that fact should not blind us to everything else that the Bladensburg Cross has come to represent,” Justice Samuel A. Alito Jr. wrote. “For some, that monument is a symbolic resting place for ancestors who never returned home. For others, it is a place for the community to gather and honor all veterans and their sacrifices for our Nation. For others still, it is a historical landmark. For many of these people, destroying or defacing the Cross that has stood undisturbed for nearly a century would not be neutral and would not further the ideals of respect and tolerance embodied in the First Amendment.”

The vote was 7 to 2, with several justices writing separate opinions. Justices Ruth Bader Ginsburg and Sonia Sotomayor dissented, Ginsburg emphasizing her disagreement by reading part of her dissent from the bench.