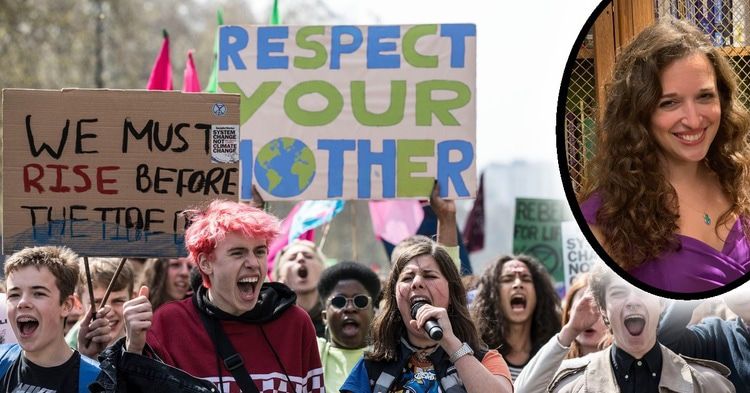 They began a global “Day of Disobedience” shutting down the center of Berlin (although their camp kept itself warm with a diesel generator) [Extinction Rebellion mocked for ‘trying to hide’ diesel generator in protest camp, by Naomi Adedokun, Express, October 10, 2019]. They wrought particular chaos in London, shutting down the City Airport, occupying Smithfield Market and generally creating havoc, leading to 1000 arrests (although eating at McDonalds) [‘McHypocrites’ criticised for ordering McDonald’s during Extinction Rebellion protest, by Joe Roberts & Lucy Middleton, Metro, October 8, 2019]. When police refused to act, livid London commuters dragged an activist off the roof of a subway train he was holding up [MIND THE SCRAP, by Holly Christodoulou, The Sun, October 17th, 2019].

But what kind of people are behind this “rebellion?"

Extinction Rebellion, with Greta Thunberg as its child Messiah, was established in the UK in May 2018 with 100 original signatories. In November 2018, its members closed down five key London bridges. The following April, they occupied five prominent central London sites, including Parliament Square, bringing the city to a standstill. Members also glued themselves to the viewing gallery of the British parliament. But now the “rebellion” has reached a whole new level of extremism.

These “rebels”—motto: “Rebel for Life,” because, they claim, based on falsified climate science data, that a “mass extinction” will begin in twelve years—have vowed to continue their insurrection until their demands are met. But their de facto leader, Roger Hallam [Email him], has said that he wants to bring down Western governments and that he doesn’t care if people die in the process [Treat Extinction Rebellion as an extremist group, former anti-terror chief tells police, by Charles Hymas, Telegraph, July 16, 2019].

But what of Hallam’s lieutenants? One of Extinction Rebellion’s most prominent spokespersons seems to strongly exemplify the type I have found to be championing the destruction of the West so many times before: exceptionally privileged, member of an ethnic minority, and not entirely stable. Her name: Dr. Emily Grossman. You can see an interview with her here: Radio host lays into Extinction Rebellion ‘lunatics’ & ‘champagne socialist’ celebrities, by Naomi Adedokun, Express, October 11, 2019.

Grossman—who is 41, childless and has paid £10,000 to freeze her eggs because she can’t find a man she regards as quite good enough for her [Emily’s a TV scientist with a double first from Cambridge. But, single at 38, she confesses I'm paying £10,000 to freeze my eggs, by Rebecca Hardy, Mail Online, October 4, 2017]—has never had to struggle a day in her life. On her website, her various “testimonials” include: “Emily is one of the most intelligent girls that I have been privileged to teach.” “Privilege” has always been important for Emily.

She attended the prestigious, high fee-paying South Hampstead School, an all-girls school in North London, also attended by Dr. Jess Wade. A fifth of the girls at this school go on to attend Oxford or Cambridge—Britain’s two most prestigious universities. With such a gilded start in life, it should be no surprise that Grossman went to Queen’s College, Cambridge, where she studied Natural Sciences. Her paternal grandfather, Dr. Dennis Friedman (1924-2014), was an “eminent psychiatrist” who studied medicine at the same college. It may well have helped that Emily’s father, Ashley Grossman, is professor of endocrinology at Oxford University and a Cambridge graduate and that her mother, Susan Grossman, is also an academic, lecturing in journalism.

Emily Grossman went on to Manchester University to do a PhD in cancer research—and then decided she wanted to become an actress. Naturally, her wealthy parents indulged her, sending her to Guilford School of Acting, no doubt at great expense. Grossman then dabbled in professional acting—mainly theatre. Her doting parents, “came to every performance I was in, both as a student in Cambridge and Manchester, and also later on when I left drama school and became a professional actress for a time” [Dad Drove Me to a Career as a Scientist, By Adam Cailler, Jewish Telegraph, 2017]. In this area, it probably assisted Grossman that her maternal grandmother, Rosemary Friedman, now 90 years old, is a novelist and playwright, with many theater contacts.

Dramatic career changes tend to correlate with such traits an anxiety and mental instability [Relation of Neuroticism and Negative Career Thoughts and Feelings to Lack of Information, by Kevin Kelly & Yun–Jeong Shin, Journal of Career Assessment, 2008] as does being a professional actor [Psychological profiles of professional actors, by Daniel Nettle, Personality and Individual Differences, 2006].

Grossman’s parents had divorced when their then only child was four; being from a broken home (as also is SJW enforcer Ben Van der Merwe) predicts mental instability [Parental Divorce, Familial Risk for Depression, and Psychopathology in Offspring, by Eleni Vousora et al., Journal of Child and Family Studies, 2012]. Emily’s father Ashley Grossman remarried in 1984. And, then again, in 2003. From these marriages, he has five more daughters. Her mother also remarried and had another daughter as well [The Snow White who started as a doctor, Camden New Journal, December 7, 2006].

Emily Grossman told a newspaper in 2017 that “I had burnt out in my late twenties and early thirties” [Scientists, it’s OK to cry, says campaigner for STEM subjects, by Rosa Doherty, Jewish Chronicle, October 11, 2017]. In other words, she had a mental breakdown, so changed career yet again.

In 2013, Emily Grossman got back into science, via a BBC scheme called “Expert Women” in which she effectively auditioned, as one of 2000 applicants, to be a female science presenter. Of course, having the right contacts may well have helped. Her mother, after all, is a former BBC news reporter and presenter on BBC2’s “Food and Drink” TV series.

Since 2013, Emily Grossman has carved out a career as a “science communicator,” appearing as a science expert on documentaries and even comedy panel shows.

When in 2015, Nobel Prize-winning British biochemist Tim Hunt said that women in science were an increasing problem because “when you criticise them, they cry,”—this was joke, but reported out of context—Grossman went on the airwaves to declare: “We desperately need to encourage more girls into science careers, and the concern is this might put them off.” She debated this on Sky News with Milo Yiannopolous, and then became very upset about the resultant “misogynistic backlash. Hadn’t quite realised the extent of #everydaysexism. Wow.” 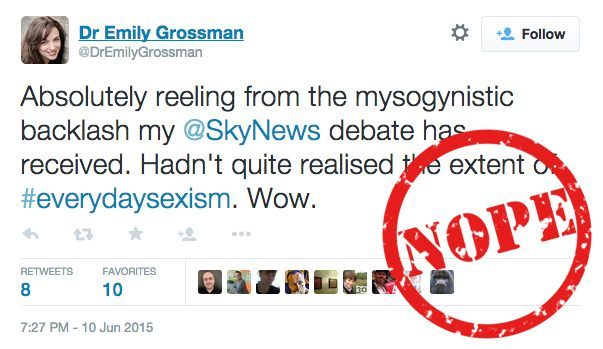 In reality, Grossman didn’t experience “misogyny” so much as simple criticism [Why Do Feminists Cook Up Stories About ‘Misogyny’ When They Lose Debates?, by Milo, Breitbart News, June 11, 2015].

But this simple criticism was so unacceptable to Grossman that, according to senior Labour Member of Parliament Yvette Cooper, Grossman “was forced to take a break from social media” [Online sexism is so out of control that we can no longer ignore it, by Yvette Cooper, Guardian, December 16, 2015]. As with the dramatic career change, this inability to cope with adversity is a sign of high Neuroticism.

“[Grossman] says her Jewish identity is a driving force behind her work. ‘My determination to keep going when I’ve been rejected has always felt in part culturally Jewish, as has my desire to express myself. I’ve always had a longing to find my place in the world and I think that is probably quite a Jewish quality’ . . . She reconnected to her faith five years ago through the pop-up shul movement Grassroots Jews, which has attracted up to 400 members. ‘It is an important group for my generation. “I have been able to connect to my Judaism on a spiritual level again.’”

And Emily has also had a sexual conversion. She was definitely heterosexual in 2017, when the Mail Online’s Hardy reported: “Emily has lived with two men, one during her 20s and a second lengthy relationship that ended last year.” But now her website reports that…

Until last year, Emily had seen herself as heterosexual, having only had relationships with men. However, she met and fell in love with a non-binary partner, assigned female at birth—singer-songwriter, music lecturer and gender activist Kimwei McCarthy. This started Emily on a voyage of discovery, questioning the boxes she had put herself into regarding her sexual orientation and even her own gender identity.

Thus it seems Emily Grossman exemplifies a trend observed by F. Roger Devlin in his Sexual Utopia in Power: Highly educated women are unable to fulfil their evolved desire to find a higher status male, so they become lesbians, specifically “femme” lesbians.

Emily Grossman can be added to the list that’s been growing for a while now. Those who spearhead our destruction are a specific type: privately educated, extremely privileged—often with academic parents—ethnic minority (frequently Jewish) and usually evidencing mental instability. In case of Grossman and Ben Van der Merwe, one can add “broken home” and “homosexual.”