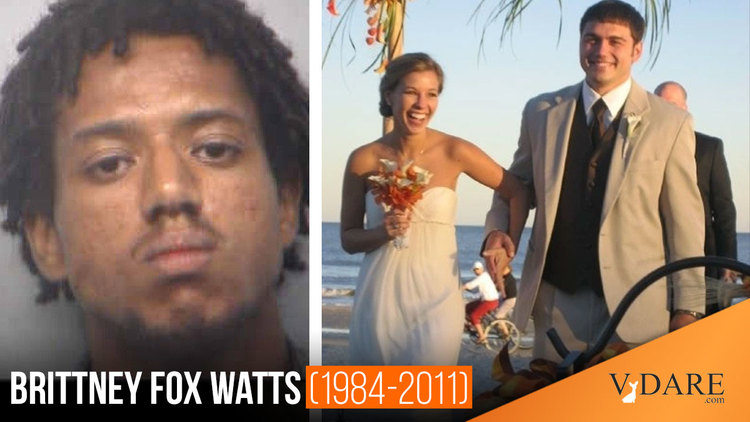 There are certain moments that stay with you forever. A group of us were in an upscale restaurant in Atlanta on July 15 2011 when one of the women got the text. Writing exactly ten years later, I still can see the tears streaming down her face as she read out the news that a girl she knew from high school and college had been murdered earlier in the day. “Brittney Watts was the most caring person I ever knew,” she said, sobbing uncontrollably, her blue eyes reddening with the tears. It was a moment made all the more depressing a few years later, when it emerged Nkosi Thandiwe had targeted Brittney Watts and two other white girls solely because he was black and they were white. Brittney was an early victim of the anti-white pedagogy that has now metastasized into Critical Race Theory. Why wasn’t her death enough to stop this happening?

Initially, the shootings were greeted with shock and confusion by the Atlanta media. The Atlanta Journal-Constitution even noted Thandiwe came from a prominent family:

Just as she was an unlikely victim -- a bubbly 26- year-old delighted with her life and only recently returned to her hometown -- the suspect was an unlikely killer: not only a security guard but the church-going son of a high-achieving family, including a mother who is an attorney versed in death-penalty law.

Police haven't yet offered a motive for the shootings, or determined whether the gunman targeted Watts or chose her at random. If the two were acquainted, though, it can only have been briefly: Watts had worked in the Proscenium building for only about a month.

The petite Watts blogged regularly about her life, sharing with readers her love for her husband and for their dog, Willow, and her joy about moving back home.

In one post, she described a day of fits and starts before writing: "I realized that I am not dying, my family is healthy, and happy, and when I have bad days/mornings, I realize my day is a dream compared to others who are suffering from much worse" [Few answers in Midtown killing, by Craig Schneider, August 10, 2012]

But during the trial, the racial angle emerged. The black-on-white triple shooting was done out of prejudice, bigotry and hatred—but not the kind the Ruling Class wants us to worry about. Thandiwe admitted in court he sought to murder the three white women because of what he had learned in college:

The man who murdered one woman and paralyzed another during a 2011 Atlanta shooting spree testified at his trial last week that he was motivated by beliefs he had acquired about white people when he was an anthropology major at the University of West Georgia.

Nkosi Thandiwe, 23, argued that the bizarre political views he encountered — and accepted — in college led to a mental state that should have been grounds for a defense of temporary insanity, the Atlanta Journal-Constitution reports.

“I was trying to prove a point that Europeans had colonized the world, and as a result of that, we see a lot of evil today,” Thandiwe testified. “In terms of slavery, it was something that needed to be answered for. I was trying to spread the message of making white people mend.”

Thandiwe explained in court that he had attended an event designed to address concerns about racial inequality the night before the shooting spree. He became furious when he saw two white people there.

The next day, the judge added “not guilty by reason of insanity” as a verdict option for the jury to consider.

Thandiwe’s novel defense gambit ultimately did not succeed. On Thursday, he was found guilty of killing 26-year-old Brittney Watts and paralyzing Lauren Garcia, then 24. He also injured Tiffany Ferenczy. The judge sentenced Thandiwe to life without parole plus 65 years in prison, notes WSB-TV.

“He told you he shot Brittney Watts, Lauren Garcia and Tiffany Ferenczy because he had adopted all these racist ideals,” Fulton County assistant district attorney Linda Dunikoski told the jury, referring to Thandiwe’s earlier testimony. “If race disorder was a [mental illness], then the Ku Klux Klan could murder and kill with impunity” [Georgia murderer fails in bid to blame actions on leftist claptrap he learned in college, by Eric Owens, Daily Caller, February 5, 2013. Links in original]

Let it sink in that, back in 2011, a black male was motivated by what he learned in college about the evil of white people to the point of taking those teachings to their logical conclusion. But, apart from dissident outlets like VDARE.com and Jared Taylor, no-one paid any attention.

Coming 19 months after the initial worldwide publicity and interest in the Atlanta shooting, news of the racial angle in the murder of Watts was greeted with crickets from the Regime media.

Today, only a handful of stories reporting the racial angle are still accessible online at all— one thankfully by the great Colin Flaherty:

According to the CBS affiliate in Atlanta:

Thandiwe said during his last few years in college, his history studies changed his thoughts about how some white people treated black people.

"Correct me if I'm wrong, but you were trying to spread the message of making white people the enemy," asked Assistant District Attorney Linda Dunikoski.

The shootings were Thandiwe's second episode of racial violence in less than a month. Thandiwe assailed a visiting courier with racial epithets and had to be physically restrained from striking and causing harm to visitors at a parking garage where he worked, said WSBTV News in Atlanta

Ten years after the anti-white shooting of three white girls in Atlanta and murder of Brittney Watts by a black male who cited ideas sounding exactly like those espoused by CRT pedagogues, it’s highly probable this is the first time you have ever encountered the news.

And the problem of anti-white hatred is much worse. Just recently a middle school teacher wrote powerfully of how the teaching of CRT is creating “racial hostility” environment at her school:

In isolation and without historical perspective, the thematic message in every book was clear: White Europeans were and are evil and African Americans were and are victimized by white oppressors. Woven into this new curriculum was a school-wide social push to focus on Black Lives Matter support groups and other social justice identity groups...

At my school, the increasing hatred towards America seemed on the rise.  I blame the books, I blame the media, the literature showing kids themes akin to America is bad, and white people are the enemy. [I’m A Middle School Teacher And See How Critical Race Curriculum Is Creating Racial Hostility In School: Providence, RI: Some Students Have Started Calling Me “America” Because I’m White, and Colleagues Accuse Me of Having “White Privilege.”, by  Ramona Bessinger, Legal Insurrection, July 13, 2021]

Ten years ago, the teaching of this anti-white agenda was quarantined in universities and colleges. Now we have corporations like Coca Cola telling their white employees to be “less white,” and Lockheed Martin sending white executives to re-education camps to atone for their white privilege.

Defying cuckservative gatekeepers’ instructions, whites across America are mobilizing against CRT. But unless they explicitly address the anti-white nature of CRT, these good-hearted individuals will miss the true threat.

With the story of Brittney Watts and the anti-white motives of her black murderer, it became crystal clear what the endgame of this nefarious teaching was and exactly why it must be opposed.

I will finish, as I began, on a personal note. I was so affected by Brittany’s murder and the Regime Media’s indifference to what motivated her killer to target her, that I was moved to start my “His Name is/Her Name is” series on white victims of black murder. My title was borrowed from the novel and movie Fight Club. I was honored when in the foreword to the long-awaited sequel Fight Club II, author Chuck Palahniuk wrote: “We hear [protagonist] Tyler [Durden] in the headlines of Paul Kersey when he reports interracial crime by writing, "Her name is..."

It all started with the tragedy of Brittney Watts.

Her name is Brittney Watts. Say it.

So that some other black anti-white racist doesn’t go and target more white people for a CRT-inspired revenge killing.