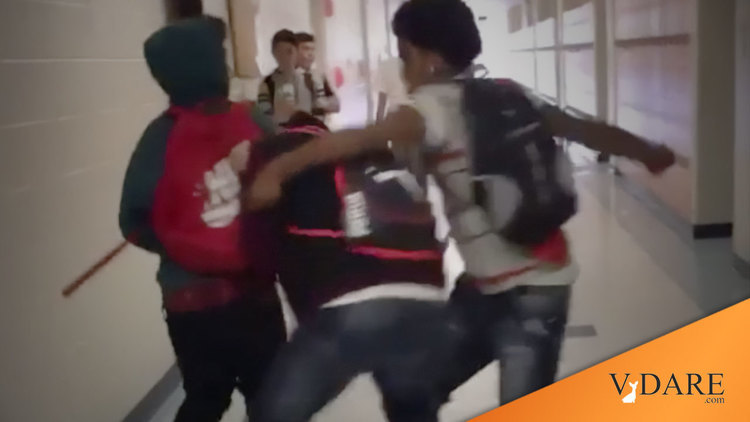 From the KXAN Austin:

AUSTIN (KXAN) — Beginning in the fall, the Austin Independent School District will be significantly scaling back the way it disciplines children who act up.

The goal is to reduce racial disparities, which show Black and brown students are being disproportionately punished compared to their white classmates.

According to data compiled by the district, Black children at AISD were nearly five times more likely than their white peers to receive disciplinary action, include suspensions, being placed at a disciplinary campus or being expelled.

These articles never cite other cities that Do It Better. I actually can imagine that Austin has a bigger race gap in discipline than, say, Huntington, WV because Austin attracts many successful, intelligent whites. Really bad racial gaps in school behavior are seen in places like Madison, WI because they have attracted academic and civil servant whites plus welfare mother blacks.

But I’ve been reading about these pushes for many years now and I never see one that says, “Sure, this plan may sound crazy, but it’s used over the last 6 years in Mobile, AL and it has been a success on multiple metrics.”

This is particularly true for middle schoolers. The top five campuses with the highest rates of discipline were middle schools.

Who ever heard of adolescents acting out?

Gloria Vera-Bedolla, an AISD mom of three, has been working with both the AISD police department and other district officials to draw attention to these disparities and help reshape the code of conduct.

“When a child is acting out, there is usually something else going on in the background that we are not aware of,” Vera-Bedolla said.

Beginning this fall, in-home suspensions cannot exceed two days. Campus behavior support teams will be created, made up of parents, counselors and teachers, who will continually review the progress of students placed at a disciplinary campus to see if they can return back to school ahead of schedule. The goal is to reduce the amount of time a child is away from the classroom.

In other words, black bad boys are our most precious resource (e.g., George Floyd), and they must be coddled at the expense of black good boys, black girls, and nonblack children. Who cares if they learn less because some black bad boy is disrupting the classroom? They are part of the majority, while the black bad boy is in the minority and therefore he is sacred.

Our mindset is so warped these days, that nobody ever notices that blacks tend to thrive more under stricter discipline.